Why Should We Ask For Evidence

You only have to walk down the high street to see a plethora of beautifying products on offer: tablets for a thinner you, powders for flawless skin, and creams for pert bods. Then there are the health products which detox, balance or nourish. These claims are everywhere and they all sound so appealing. We spend millions of pounds a year in the UK on health and beauty products yet many of the promises made on the products are never delivered. Does it really matter though? People don’t buy an anti-wrinkle cream in the real hope that it will take years off them; sometimes it’s about treating yourself and that may well be worth the price tag.

But what about the false claims that cost more than just a few quid? Sense About Science is a small charity whose remit is to equip the public to make sense of science and evidence. While working with patient groups to develop the publication ‘I’ve got nothing to lose by trying it’, we heard stories from real people who had been given hope by ‘miracle cures’ advertised on websites and patient forums. People dressed in lab coats talking about complex biological molecules, the personal testimonies from ‘real patients’ and scientific terminology give these claims an air of legitimacy, making people feel pressured into trying ‘miracle cures’ for themselves. The husband of a multiple sclerosis sufferer told us that he would rather have spent the last few months of his wife’s life and thousands of pounds on a holiday rather than chasing false hope in clinics offering unproven stem cell treatments.

Regulators such as the Advertising Standards Agency, or Trading Standards, are working towards chasing down products that make these claims, but it’s impossible to tackle them all. As soon as one claim has been taken down, another one pops up. The only solution is to make a permanent difference. Last September, Sense About Science launched the ‘Ask for evidence’ campaign to do just that. It doesn’t always have to be the regulators knocking on the door of those making false claims, everyone can do it. By giving people the questions, they can ask for themselves.

Are you frustrated by distorted and misleading scientific claims pulling the wool over people’s eyes and undermining science? You can do something about it. Just pick up the phone, write an email, or fill out one of the handy ‘Ask for Evidence’ postcards you can find on the Sense About Science website and ask for the evidence. You might find the person making the claim has good evidence to back it up. 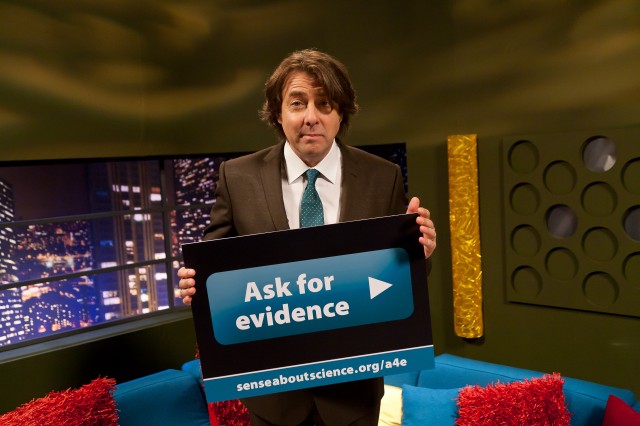 Voice of Young Science (VoYS) is a network run by Sense About Science, which encourages early career researchers to play an active role in public debates about science. Since 2005, participants of VoYS have been running myth-busting campaigns and chasing down pseudoscience. Their campaigns have received wide media coverage and highlight the need to question the evidence, promote scientific reasoning and stand up against bad science.

VoYS members from around the world have been asking for evidence:

Rita asked a shop for evidence behind their claims on a leaflet that wheatgrass juice was a ‘natural healer’. The following day the leaflet was removed from the shop floor while the content was reviewed.

Jennifer got in touch with Marks & Spencer about their ‘MRSA resistant’ pyjamas and was told that there is a trial underway.

Rhys came across a miracle cure product advertised on a Crohn’s disease forum and decided to investigate further. He found out that the ‘cure’ could cause serious harm to health so reported it to Trading Standards. The product has now been banned in the UK.

These stories show just how easy it is. If enough people ask for evidence, companies will come to expect it and make the evidence more available. Perhaps they will also think twice before making false claims.

// Do you have a desire to stand up for science in public life? To find out more about Sense About Science and VoYS in Scotland contact Lindsay Hogg at [email protected]

Lindsay Hogg is a Senior Public Engagement Officer for the Medical Research Council.