Could reintroducing wolves reinvigorate the landscape of the Scottish Highlands? Simon Gill investigates the effects of bringing back this icon of the wilderness to modern day Scotland. 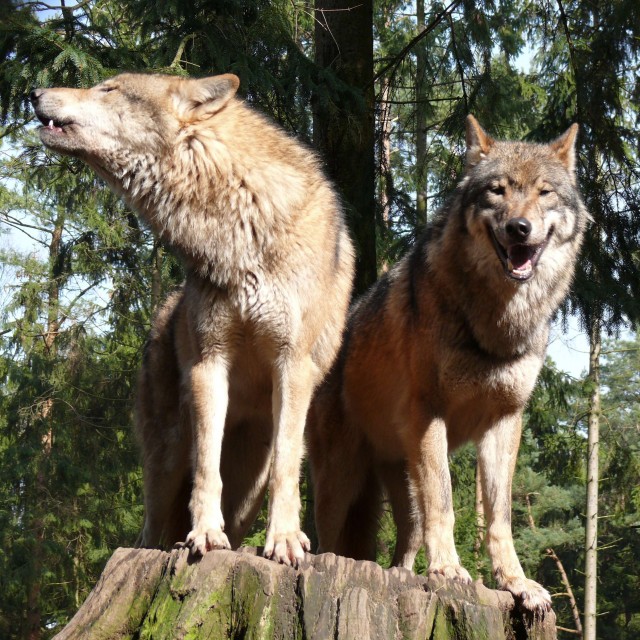 I’m sat by my tent, dinner cooking while the sun sets away across to the west. The still Highland evening is perfectly quiet up here near the summit of Ben Lomond. The view from my tent door takes in Glasgow and the Clyde estuary to the South and innumerable Highland mountains to the north. And then I hear it, a distant howl. At first just one voice then slowly it is joined by a dozen more. The sound strikes me with terror; it’s the singing of the Highland wolves.

There are no wild wolves in Scotland today, but 500 years ago there were and maybe in another 50 they’ll be back. The idea of reintroducing wolves to the wild parts of Scotland has been growing over recent decades and since the 1950s several locally extinct animals have been reintroduced: the white tailed eagle, red kites and more recently a trial to reintroduce beavers. With success on these fronts, could the wolf be next?

Species reintroduction, particularly with large carnivores, is controversial. Some, such as the White Tailed Eagle reintroduction on the Isle of Mull in the 1980s have now caught the public imagination, but all engender opposition from key groups including farmers and landowners who are concerned about the effect on their way of lives. One thing that eagles, kites, beavers and wolves have in common is that they were wiped out in Scotland by humans. Whether through hunting or changes to their environment it is us who are responsible for their disappearance. European law now makes it a requirement that governments look at the possibilities and practicality of reintroducing species which have humans responsible for their extinction. Many of these are regarded as ‘key-stone’ species, an ecological term meaning that their effect on the area’s ecology is disproportionately large compared with their number. Understanding these types of ecological effects is a key part of any reintroduction.

The ecological effect of wolf reintroduction in Scotland is, at present, unknown. But the effects of another key-stone species, the beaver, are being teased out by a trial reintroduction at Knapdale in Argyle, about two hours’ drive from Glasgow. “There are a number of things we monitor”, says Martin Gaywood who works for Scottish Natural Heritage (SNH), “ — the beavers themselves — their own ecology and population dynamics, the woodland interest, and the loch systems. Then there are fish populations, otter populations and dragonflies”. Martin has been involved in beaver reintroduction since it began. In May 2009 three families of beavers were released into an area of slow moving water, lochs and woodland in an attempt to estimate the effect they would have on the Scottish Highlands if a general reintroduction were undertaken. SNH is in charge of monitoring beaver reintroduction and of answering some of the ecological questions that it poses 1. “One of the key reasons why we are interested in beavers is that they do seem to have this possible keystone role in the ecology of woodland and freshwater habitats.” It is easy to see why – take an area of small lochs and rivers for example. When beavers arrive they begin engineering works: felling trees, building dams and as a consequence diverting water flow and flooding new areas. These increased areas of shallow standing-water and riparian woodland surrounding the water edge can provide important new habitats. A big effect is on the amount of deadwood in the environment, something that is almost entirely missing from many human-managed woods. “Beaver activity can result in a lot more deadwood”, explains Martin, “either standing deadwood, which might come about because they flood certain areas and the trees might die, or fallen dead wood where they have felled a tree”. Deadwood is a hive of biodiversity providing perfect habitats for invertebrates, lichens and fungi to name a few. There is a similar effect in the water, where aquatic marcophytes — water dwelling plants — depend on the availability of standing water, and in turn provide sites for dragonflies to lay eggs.

The beaver trials highlight an important difference between direct and indirect ecological effects. Direct effects between beavers and other species, such as willow and aspen, include felling trees for food and dams. These effects are usually easy to study; indirect effects are another matter. The relationship between beavers and dragonflies involves an elaborate chain of cause and effect involving several intermediate species. Quantifying these requires masses of data and advanced statistical techniques.

Indirect effects have often been ignored in studies of ecosystems as it is assumed that the direct effects are more important, but in wolf research that trend is changing. A recent paper discussing Scottish wolf reintroduction quotes new evidence suggesting that indirect and non-lethal effects are at least as important as direct predation 2.

Yellowstone National Park in the USA is a place that knows about wolves. In 1995 a project began which has seen wolves released, packs develop and the ecosystem respond. Today approximately 100 wolves live in an area about one tenth the area of Scotland. Whilst the predation of wolves on elk is significant now, it is the behavioural changes of elk and the resultant effect on vegetation levels that is interesting Yellowstone’s researchers. The change in elk habits since wolves arrived comes down to their awareness of danger. Previously, elk were happy feeding in most parts of their habitat, but the wolves have changed that and the elk now move in ‘landscapes of fear’. This means that they are more wary when feeding and tend to avoid areas where wolf predation is most likely. The result is an abundance of willow and aspen in areas that were previously browsed clear 3. The effect of wolves on willow and aspen is a perfect example of an indirect effect known as a trophic cascade, and trophic cascades could also be an important ecological effect when reintroducing wolves to Scotland.

Scotland does not have elk, but the ecology of the highlands is strongly influenced by a similar species – the red deer. Like the extinction of wolves, red deer numbers are high because of human intervention. Stalking is lucrative for Highland estates, and more deer means more chance that their high paying clients will be able to bag one. But the ecological effect of the deer is massive and has led to barren landscapes, forests which are not regenerating and areas of low biodiversity. Even a small number of wolves in the Highlands could have the capacity to change red deer behaviour in a similar way to the changes observed in Yellowstone’s elk. It seems likely that the resulting trophic cascade could reinvigorate Highland biodiversity.

Wolves may be positives in biodiversity terms, but there are other barriers to overcome. “Little Red Riding Hood has created too much bad publicity”, says Douglas Richardson, the animal collection manager at the Highland Wildlife park where a pair of captive wolves provide an ambassadorial role for the idea of reintroduction. Beavers are small and cuddly, but wolves tend to create more than a little fear in the public imagination. Will wolves ever roam wild in the Scottish glens again? Douglas thinks so. “Yes! But there will almost certainly be other reintroductions first.” If he’s right we could look forward to hearing wolves howling from the Campsie Hills to the North Coast and to living with the thought in the back of our minds that maybe, today we could see a wolf. But most importantly from an ecological perspective we could look forward to a Scotland with more biodiversity and a richer ecology. With the return of low lying vegetation and an expansion of our native forests, the Highlands could over the next 50 years become a greener, less barren place. As Scottish nature writer Jim Crumley put it in a recent BBC radio broadcast: “The wolf that howls in our dusk is a painter of mountains.” 4

Simon Gill is a PhD student at Strathclyde University studying renewable generation in power systems but he also has a passion for spending time in the wild bits of Scotland.