The GIST’s Cornelia Eisenach, Andrew Farrell and Lydia Murray met the organisers of Glasgow Café Scientifique to talk science, the public and the media.

Café Scientifique, or Café Sci as it has come to be known, has become a Glaswegian institution. Running for over 7 years now, on the first Monday of every month, invited speakers take to the stage to illuminate weird, wonderful and often controversial science topics. From British author Simon Singh discussing the Big Bang to Nobel Laureate Sir James Black on drug discovery — via talks on climate change, stem cell research and designer babies — Café Sci is not your typical academic lecture. Speakers take to the stage without props or flashy technology. Much like a stand-up comedian, their job is to captivate the audience in Glasgow’s Tron Theatre Bar using words alone. After a half hour introductory talk from the speaker there is a short break to allow glasses to be refilled, then it’s over to the audience to ask questions and offer their own opinions. This is the core of the Café Sci experience. “On some nights we have kids form the age of about nine up to old people at the age of ninety. Some are scientists, some are non-scientists,” says Glasgow Café Sci co-founder Mandy MacLean. “Whilst it’s nice to have some scientists in there coming along to support questions, it really is aimed at your public on the street. We always try and do things that are not too obscure that are of public interest or have been in the press.” MacLean is Professor of Pulmonary Pharmacology and Dean of Graduate Studies at the College of Medical, Veterinary and Life Science, University of Glasgow. She was inspired by a Café Sci experience in Edinburgh to set one up herself, here in Glasgow.

Tonight, she and organisers Kevin O’Dell and Martin Hendry have enlisted Phil Hanlon to talk about the ‘Scottish Effect’ — the observed widening of the gap in life expectancy between Scotland and England, which cannot be attributed to deprivation or differences in social class. Hanlon is Professor of Public Health at the University of Glasgow. In common with previous speakers he does not use PowerPoint; instead he describes a graph of rising alcohol consumption over the decades by slowly raising his hand while walking from left to right, turning the stage into an imaginary x-axis. “If the speakers insist on PowerPoint,” says MacLean, “they wouldn’t be asked to come.” Hanlon does a good job, drawing stunned exclamations and laughs from the audience. “I think Phil made it very accessible so that everybody in the audience would understand exactly what he was talking about”, says audience member and Café Sci first-timer Christine Cooper. Her companion and fellow lecturer Lesley Catchpole adds,“But you’ve got to have really good speakers. There’s nothing worse than having a poor speaker, being lost. [PowerPoint] does sometimes help, but if you’ve got good speakers then it’s not an issue.”

We spoke to MacLean and O’Dell as they made final preparations for the evening’s event. O’Dell is a lecturer in Biomolecular Science at the University of Glasgow. How do they feel about the effectiveness of Café Scientifique in bringing science to a wider audience? “It gives the opportunity to the public of actually coming and asking a question directly to a scientist”, notes MacLean. “The only other option is to email people maybe, or attend university lectures where they wouldn’t want to ask a question.” Audience member Siobhán Hoy, a life sciences student at Glasgow University, agrees: “The science world can be quite exclusive to people who know what they’re talking about. And unless you’re really confident about your interest, you don’t get the chance to hear about it. You can’t pick up a physics journal and have a wee read because you don’t understand the terms, you don’t know the jargon. So this is just really accessible and it is for all ages as well. I think that’s what I quite like about the Café Scientifique.” 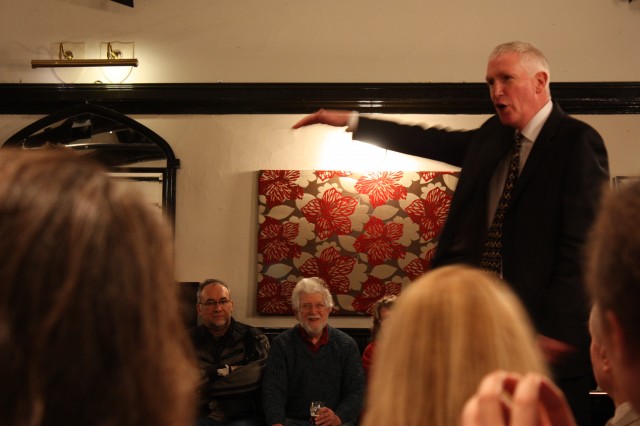 Public acceptance of scientific evidence and key theories has suffered some serious set-backs over the last few years. As Nobel Laureate Sir Paul Nurse explored in the recent BBC Horizon programme, ‘Science Under Attack’, the public is losing faith in scientific theories such as Darwinian evolution, the link between HIV and AIDS and the impact of man on global warming. The organisers quickly warm to the subject. “I think there’s a kind of disbelief in anything that experts say, I don’t think it’s particularly science”, says Kevin O’Dell. Mandy adds, “I mean we have working against us the media, because the media always get it wrong. What they actually put out there is either inaccurate or sensational. Then it becomes unbelievable to the public.” Can Café Sci readdress the balance? “Café Sci is one good way of several ways of getting it across. No one route is going to do that”, answers Kevin. “I think there is a strong thing that scientists are almost a different species. I think just coming along and seeing real people who work in this area, so they see that — underneath it all — we’re normal people, really.” “Yeah we’re normal”, Mandy laughs, “we’re not people with big pointy heads.” “And”, Kevin adds seriously, “obviously we’re making a great deal of effort in trying to get speakers in who will be able to communicate with people in general.”

In the last decade science has enjoyed increased exposure in the media, helped by the charm of physics superstar and one-time D-Ream keyboard player Brian Cox amongst others. Science is cool and geeks are the new popstars. Isn’t this a positive development in the media, we ask? “I think there’s two differences there”, says Mandy. “I mean [Cox] has been great at interesting young people in science but it’s when it’s inaccurate sensationalism of science that it becomes dangerous and even our politicians work against us. I mean Vince Cable undid 7 years of my work recently. He made some quote about ‘we have to stop scientists hiding away in basement labs wearing woolly cardigans’ or something and I’m thinking: ‘I just spent seven years trying to stop the public thinking that that’s what we’re like. And then a careless word by one politician and we’re back to square one with all the public thinking we’re hidden down in basement labs poring over sort of steaming things.”

To help improve understanding of science in the public the organisers frequently cover controversial topics, making for some heated discussions. Says Kevin O’Dell: “You can’t always necessarily tell whether something is going to turn out to be controversial. You only need one or two people in your audience to be very anti-something. Evolution, for example — there will always be somebody that perhaps just does not believe.” But whether it’s evolution, stem cell research or euthanasia, Kevin believes that “it’s perfectly reasonable to be pro or anti, but what you want to be is informed on that thing.” Mandy agrees. “It is about educating accurately” — that is one of the things that Café Sci can contribute to and help us to separate fact from fiction and myth from reality.

// The next Café Sci will be at 7pm Monday 11th June 2012 at The Victorian Bar, Tron Theatre, Trongate, Glasgow, where Frank Close will be speaking about neutrinos and their uses.