In the midst of the free-love movement that shook the western world in the 1960s, a crackdown on psychedelic substances ensued across the globe, criminalizing many psychedelic drugs in both a personal and clinical setting[1]. In a devastating blow to the field of psychiatry, this act brought an end to almost all psychedelic research, making it impossible for scientists to access these substances or obtain funding from governing bodies. Professor David Nutt, the former chief drug advisor to the UK government, described this as ‘the worst censorship of scientific research in the history of the world[2].’

After a 30-year hiatus period, the past decade has seen a resurgence of research into psychedelic substances. This new research has shown the excellent therapeutic potential of psychedelics against a range of psychiatric disorders including addiction, anorexia, and depression[3].

In 2019, the first centre for psychedelic research was opened at Imperial College London[4]. Since then, several landmark studies have been published including the use of psilocybin, the psychoactive ingredient in magic mushrooms, as a potential treatment against depression. But how does psilocybin work on the brain to tackle depression? The short answer: more research is needed. Based upon a number of preliminary studies, some scientists believe psilocybin affects the amygdala (the part of the brain that processes emotions[5]). Another possibility is that psilocybin causes the brain to grow more cells (neurogenesis[6]).

A study in 2021 looked at 59 participants suffering from major depressive disorder (MDD), comparing psilocybin with escitalopram (a widely distributed antidepressant[7]). Interestingly, no statistical difference was found between the psilocybin and escitalopram group on the Quick Inventory of Depressive Symptomatology–Self-Report. A secondary assessment was also carried out on both groups through multiple well-being tests, which sees the psilocybin group come out on top. A separate study at John Hopkins University looked at 24 participants with MDD[8]. Upon receiving psilocybin therapy, almost half (13 participants) reported that after four weeks, their depression had gone. As a result, numerous studies have emerged producing similar results. 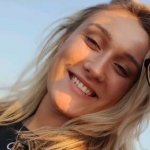 Courtenay is currently a third-year PhD student within the School of Chemistry at the University of Glasgow. Her current research focuses on the fabrication of dipeptide hydrogels using electrochemical signals. Outside of academia, Courtenay is an avid foodie and wine lover with a special interest in club culture and film photography.