Beyond a Beautiful Mind: What we know about schizophrenia 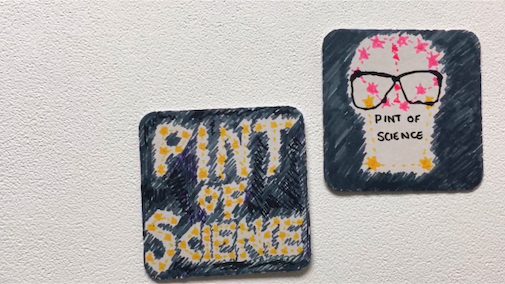 To the unindoctrinated, the Butterfly and Pig might seem a strange venue for PhD researchers to discuss their work. Rising up the narrow stairway to the bar on the 2nd floor, you’re flanked by a framed collage of records from the ’60s, ’70s and ’80s. As you ascend, the din of the regular Monday crowd who sit laughing, chatting and boozing falls away behind you. I’m greeted by two volunteers from the Pint of Science festival who check my ticket and hand me a sticker: a pint of beer with thick-framed glasses hugging the glass and a pink brain poking out of the top. Neat.

Pint of Science is a grassroots community organised by over 2000 scientists in the UK which brings scientists out to their local pubs to present their work to the general public. With engaging talks and a relaxed atmosphere, it’s not hard to see the appeal. Even the barman tells me that he always ends up getting interested in the talks held here. Tonight’s event is titled “Beyond a beautiful mind: What we know about schizophrenia” and features two speakers, both PhD researchers from the University of Glasgow: Ashleigh Willis and Stephanie Allan.

Ashleigh is first to take the stage, opening with her talk “Schizophrenia Under a Microscope.” Ashleigh’s work focuses on exploring schizophrenia at the cellular level, figuring out what we can learn from schizophrenia from experiments in a petri dish. One of her very first slides simply asks: what causes schizophrenia?

“I kind of regret putting this on a slide”, says Ashleigh. That’s because the causes behind schizophrenia are numerous and complex. She stresses that schizophrenia has 3 main pillars of risk: brain development, genetics and environment. To begin to answer the question, we’re taken on a whistle-stop tour of the early stages of the development of the central nervous system.

“We start off our lives as this weird, noodle-y, alien-looking thing that doesn’t really look like a brain”, says Ashleigh.

“This is followed by a rapid expansion of the early brain, called neurogenesis: the birth of lots of new neurons”.

These neurons then have to undergo a process called migration; the neurons from the CNS migrate upwards and outwards to form higher order areas of the brain. It’s the disruption of early developmental stages like this which can increase the risk of someone developing schizophrenia later in life, and specific genetic and environmental risk factors are known to increase the risk of an individual developing schizophrenia. Using gene sequencing technology, researchers can take a closer look at the genomes of schizophrenia patients compared to healthy individuals or ‘controls’. This way, researchers can highlight mutations which are prevalent in individuals with schizophrenia.

“Many low-risk common mutations exist”, says Ashleigh, “if you have one, that doesn’t mean you’ll get schizophrenia. But if you have a lot of them, you might find some kind of cumulative risk”.

“There are a smaller number of very rare and very high-risk mutations; having one of these really increases the likelihood of developing schizophrenia”.

Other environmental factors, such as stress, malnutrition and viral infection, increase risk too. It’s when these couple with genetic risk factors at a time of extreme vulnerability during brain development that the odds of developing schizophrenia greatly increase.

However, the complex interplay between all these factors can’t be studied in the human body right away; there’s just too many variables. That’s where neurons in a petri dish come in handy.

“I take the two factors and see what they do together, then look at whether the response of the neuron to the environmental factor changes when we manipulate the genetics”, says Ashleigh.

She does this by using growth factors (things like vitamins, hormones and other substances).

“For example, this growth factor accelerates development, and the neurons get bigger and quicker, but when we have an under-expression of a certain gene, it cannot exert that function. We can see that kind of relationship, and we can study it further”.

To round up her talk, Ashleigh leaves us with this:

“I think going forward we really need to be able to treat symptoms. But to do that, we really need to understand where they’re developing from and what are the biological underpinnings of this. And if we can do that, I think we can give some precise, informed and quite individualised treatments”.

The second speaker to share her work is Stephanie Allan. The talk is titled “Smartphones for Schizophrenia, Seriously?”, and details her work around the development of apps as a supplementary treatment or monitoring tool in patients with schizophrenia.

Lit up large on the screen early into the talk is a quote from a Scottish patient suffering from schizophrenia, which reads:

“It was like the most terrifying horror film and horrible nightmare were rolled into one and made into real life.”

And then, some alarming figures: “People with schizophrenia have a life expectancy comparable to an adult living in the 1930s”, says Stephanie. But from what she tells us, this shouldn’t come as a surprise. “Stigma, discrimination & violation of human rights of people with schizophrenia” are all common. And the fear of relapse affects people’s lives in a multitude of negative ways. “Relapse really impacts people’s interpersonal relationships, their finances”.

So, can smartphones help?

“More people are in need of mental health support than can be provided”, says Stephanie, and by using apps, such as Empower, patients can track how they feel on their smartphones in order to get a baseline. If this baseline veers off its usual trend, peer support workers can check in with the patient.

This kind of technology will allow researchers, peer support workers and clinicians to create interventions which are more useful for all involved.

“Actively involving service users in design seems to be a good way to do this”, says Stephanie. “We’re not trying to replace people, just use technology to augment relationships”.

But the technology comes with its own difficulties. It requires the patient to reflect every day on some difficult stuff – including whether they’re hearing voices and whether that’s upsetting to them. And when speaking to both patients and service users, Stephanie found that data privacy is a big concern shared by both parties.

Other useful technologies exist. Developments in virtual reality allow service users to work with patients in order to create an audio-visual representation of the voices which they hear. This way the patient is able to interact with the voice, in the presence of a trained professional, in an attempt to gain some control over them.

“The way to make people learn new responses is to show them that they’re safe”, says Stephanie.

“Voices can be so degrading and tell you to do the most awful things. If you can interact with them, you can take back power. You can say I don’t want to talk to you”.

But to close, Stephanie reminds us of the danger of stigma and the importance of overcoming it once more.

“When psychotic breaks happen to people, they get pushed down. They live in socially deprived areas”.

“Surely the best intervention would be a world where people with schizophrenia could live without stigma”.

This article was edited by Sonya Frazier.

Patrick Hughes is a recent graduate of the University of Glasgow. He begins work as a science journalist with Chemistry World magazine shortly.