The Amazon… The largest rainforest on Earth; spanning nine countries, covering 2.6 million square miles and home to a staggering 10% of all known plant and animal species1. But for how much longer? An area of rainforest the size of 4500 football pitches disappears every day in Brazil alone. If this vanishing act continues at such an astonishing rate, more than half of the Amazon’s 15,000 tree species will be at risk of extinction in the near future2, and as the rainforests vanish, so too do their inhabitants.

The Earth is currently experiencing its sixth mass extinction event — species are dying out at the fastest rate since the demise of the dinosaurs, 65 million years ago3. Unlike the previous five mass extinctions, which were mostly caused by monumental natural disasters (such as volcanic eruptions and asteroid collisions), the current event is nearly entirely due to human impact. 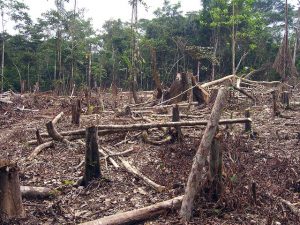 Humans pose a multitude of threats to the planet and its rainforests4, though perhaps most significant is the destruction of the natural environment for agricultural development. As the global population increases exponentially, so does the demand for products like beef and soy. Demand paves the way for supply, and these resources have to come from somewhere, with rainforests cleared to make way for grazing pastures and cropland. In fact, 80% of deforested areas in the Amazon are used as pastures for cattle. However, there is an increased risk of fire once the trees have been cleared and replaced with grass, and fires lead to a reduction in soil nitrogen content. In turn, this leads to a decrease in productivity, which encourages farmers to sell the land to larger landholders, who can make extensive use of artificial fertilisers and pesticides. The original landowners must then destroy further areas of rainforest for their displaced livelihoods.

Another important issue that the Amazon faces is the extraction of resources, from mineral mining and searching for oil, to logging and harvesting of aquatic animals. While this doesn’t cause the same extent of deforestation as agricultural development, areas of forest must be cleared to make way for access roads and each activity has a variety of other impacts on the already fragile environment. For example, gold mining pollutes water in the area with toxic run-off (often containing mercury, which doesn’t biodegrade and enters the food chain), and logging causes an increase in forest fires and soil erosion.

There are regulations in place which attempt to limit these detrimental effects, by only facilitating sustainable extraction in designated areas. However, these can be ineffective in vulnerable locations, like rainforests, as there is a high demand for these resources, but only weak law enforcement to protect them. Thus, illegal extraction of resources is prevalent. For example, 80% of all timber exported from the Amazon in the 1990s was found to have been illegally harvested5. 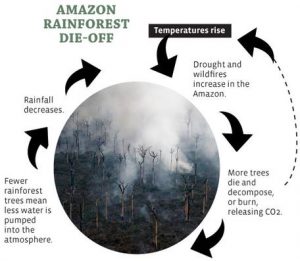 While 30 million people inhabit the Amazon and directly depend on its resources, the above are not just local problems. Many more people around the world also rely on it for food, water and medicine, but it is vital to all of us. There is a clear connection between the health of the Amazon and the health of the planet as a whole. It is both one of the largest carbon dioxide reserves on the planet and the source of 20% of all fresh water worldwide, which makes it crucial in stabilising global climate. Destroying these rainforests releases the stored carbon into the atmosphere and disrupts the hydrological cycle, contributing to climate change. Climate change itself then slows down plant growth and causes the death of more trees (and the release of more carbon), resulting in a positive feedback loop that could have disastrous consequences worldwide. The point of no return for the Amazon, which would result in ecological collapse, has been estimated at 20% deforestation. We are currently on 18%6. 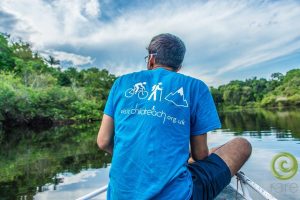 For your chance to see it before it’s too late:

This year, a team from Glasgow are going on a once in a lifetime trip to the depths of the Amazon; they’ll be sleeping in hammocks, spotting lucky pink river dolphins and learning from the indigenous communities that live there — all while raising money for Childreach International7, a charity who support children’s rights projects around the world. Registration closes at the end of February 2017, so contact Hannah ([email protected]) to join the team today!

This article was specialist and copy edited by Derek Connor 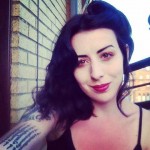 Kim is currently an isotope ecology PhD student at the University of Glasgow/SUERC, and has a particular interest in zoology, criminal psychology and forensics. In her spare time, she likes to drink tea, climb trees and wear vintage headscarves. She is head of copy editing at The GIST and you can find her on twitter at @KimRobynWood.