For many people, a ‘psychedelic experience’ doesn’t mean much more than seeing colourful shapes and listening to Pink Floyd while taking ‘acid’ or ‘shrooms’. However, for some scientific researchers, these experiences serve as a unique tool to explore the human consciousness.

The Rise and Fall of Psychedelic Drug Research

The word ‘psychedelic’ is derived from the Greek words ‘psyche’ and ‘delein’, meaning ‘the soul’ and ‘to reveal’, respectively. The term is used to describe substances which can trigger mind-altering experiences. Such drugs range from naturally occurring substances, such as psilocybin (the active compound of magic mushrooms), to the chemically synthesised lysergic acid diethylamide (LSD). It was precisely the synthesis of LSD and the discovery of its psychoactive properties by Albert Hoffman in 1943, which sparked the initial interest in using psychedelic drugs in both scientific research and psychoanalysis. From the 1960s until the early 1970s, scientists explored the use of psychedelic drugs in various settings and patients, including those suffering from mental disorders, such as schizophrenia, or affective disorders, such as anxiety and depression. While in patients with schizophrenia psychedelics only worsened their psychotic symptoms (delusions, paranoia, hallucinations), patients with obsessive-compulsive disorder, addiction or affective disorders experienced notable improvements 1. Even though the experimental standards at that time wouldn’t meet the current criteria in terms of reporting, control groups and replication, psychedelics still showed promise as a treatment therapy. This was in spite of the possible side-effects of distorted perception or recurrence of frightening images (however these are rare and usually occur in unsupervised settings). So, what happened? Why can’t you buy psilocybin in the pharmacy?

Before researchers had the chance to further explore the action of psychedelic drugs, conducting psychedelic research became rather complicated due to the publication of the UN Convention of psychotropic substances in 1971. In the legally-binding, international agreement, psychedelic drugs were re-classified as a schedule 1 or class A drugs – the class with the harshest punishment for drug possession or dealing 2. As it’s adherence is a requirement of UN membership, this action resulted in limiting the access to psychedelic drugs internationally, thus affecting psychedelic research on a global scale. Several decades later, researchers still have to face a number of practical and financial difficulties to conduct their research. Prescription of psychedelics not only requires a license which costs £3000, but the drugs can only be administered in licensed institutions – and in the UK there are only 4 such institutions. Moreover, only one pharmaceutical company produces psilocybin of the required quality – and sells it at the rate of £100,000 per 1g. The total cost of psychedelic drug research is therefore 5-10 times higher than that of other classes of drugs, such as heroin 3. Such high costs largely limit the number of participants and control groups, thus restricting the researchers’ freedom to explore the action of psychedelics in large trials. Not only that, because of the controversial nature of the research, most research groups depend on private funding and donations which are not always reliable sources of income. Nevertheless, there are some exceptions.

With a background in psychoanalysis and psychology, Dr Carhart-Harris became interested in the possibility of using LSD and psilocybin to understand vague concepts. such as ‘self’ and ‘consciousness’. by relating them to brain activity with the help of brain-imaging techniques. As part of his PhD research, he approached Professor David J Nutt, at that time the Head of the Psychopharmacology Unit at Bristol University and currently a member of the Psychedelic Group at Imperial. Notably, Professor Nutt also held a position on the Advisory Council on the Misuse of Drugs but was dismissed after presenting statistical data on the harmful effects of drug abuse, with the unfavorable conclusion that alcohol or horse riding is more harmful than taking LSD 4.

Over the course of their collaboration, Dr Carhart-Harris and Professor Nutt administered psilocybin to healthy volunteers. With the use of functional magnetic resonance imaging (fMRI), they noted significant differences in brain activity and connectivity between waking-consciousness (or resting-state) and the psychedelic state. Specifically, they observed decreased activity of the default mode network (DMN) – a network composed of many interacting brain regions. The DMN is thought to be involved in processes such as the perception of the self or others or thinking about past and future events, as its increased activity is commonly seen in ‘mind-wandering’. Moreover, the less coordinated activity of the DMN in the participants was associated with increased sense of ego dissolution and magical thinking (wishful thinking, paranoia, creative thinking), suggesting it plays a role in shaping and controlling the state of our normal waking consciousness. All of their observations led Dr Carhart-Harris to a new, interesting idea – the entropic brain hypothesis.

For those who are not familiar with entropy, the term describes the measure of how a ‘system’, which can be anything from your room to the universe or the brain, is organized. For example, if you are busy with uni work and your room is a complete mess, you could say your room has a high entropy. Conversely, if your parents are visiting and you clean up, your room would now have low entropy. You can look at entropy in terms of molecules and atoms and the concept is commonly used in chemistry and physics – so, could it be applicable in neuroscience?

According to Dr Carhart-Harris, some networks and connections of the DMN evolved to suppress the naturally high-entropic state of the brain. This was most likely to prevent humans from losing focus when they should be trying to survive, find food or reproduce. However, this may also affect creativity. During childhood, your brain networks are still undergoing dynamic changes due to synaptic pruning and maturation, so your overall network connectivity and brain entropy is relatively high (that’s why some forms of daydreaming and ‘magical thinking’ are deemed acceptable, or even cute). But with increasing age, the entropy of your brain decreases as a consequence of the reduced connectivity. So, how can you access this high-entropic state again, being the boring, non-magical adult you are? As you might have guessed, the answer is psychedelic drugs. Although it’s still not entirely clear how psychedelics produce these effects, it is known that on a cellular level they bind to specific types of neurons and make them more excitable and thus, more likely to communicate with other neurons. And interestingly, psychedelics activate these neurons differently based on their location in the brain. 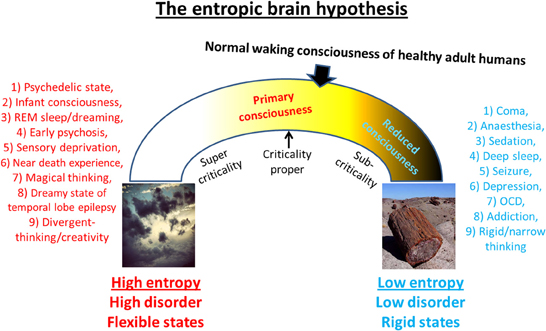 Although the theory is still in its infancy and we still don’t have a specific ‘bio-marker’ of entropy in the brain, it seems to make sense 5. You could even stretch the theory a bit further and start to question whether people with mental disorders, such as schizophrenia, have had their networks affected during development and, thus, somehow their brains have more entropy than they should, potentially explaining how hallucinations and other dysfunctions could arise. Which brings me to another area of the psychedelic research – the treatment of depression.

Treating Depression Through the Psychedelic Experience

Although some advances have been made in the treatment of depression, the options are far from ideal, with many patients experiencing side-effects or even being non-responsive. After some research groups started to explore the possibility of treating anxiety in late-stage cancer patients using MDMA/psilocybin and being successful enough to start trials 6, the Psychedelic Group used a similar approach for treatment-resistant depression (TRD). The so-called ‘psilocybin with psychological support’ (PwPS) refers to giving the patients a low-dose of psilocybin under controlled conditions, in the company of an experienced clinical psychologist and the principal investigator. Throughout the psychedelic experience, they monitor the patients to reduce the possibility of a ‘bad-trip’ (surprisingly patients who experienced a bad-trip still reported decreased depressive symptoms) and possibly help them discover the root of their depression. The whole experience thus resembles an intense version of a psychoanalytic therapy session, with psilocybin acting as a ‘catalyst’ for achieving recovery. So far, the group has achieved incredible results. Many of their patients have reported an alleviation of all depressive symptom for up to six months after one session, describing the experience as a ‘reset’ 7.

While the researchers still don’t know the mechanisms behind these drastic and effective improvements, the findings are worth further investigation. The research of psychedelics could potentially improve the lives of millions of people suffering from depression. As with any new scientific discovery, it’s important to be cautious – the group puts a lot of emphasis on the psychological support given to the patients (which alone might be a reason for the big improvement) and doesn’t advise people to self-medicate. Psychedelic drugs can be harmful, no one denies that, but why not allow scientists to have access to such a potentially powerful resource? What else could psychedelics teach us? Hopefully, we’ll find out by the end of the psychedelic renaissance.

This article was specialist edited by Miruna Costreie and copy-edited by Kirsten Woollcott.

Katarina Moravkova is a final year Neuroscience student at Glasgow Uni. Besides her interest for science, she also enjoys playing music, doing yoga or (pole) dancing