Every single object on this planet, whether living or non-living, is made up of atoms — the same atoms that make up the stars of galaxies billions of light years away. Like every other particle, the atoms of our DNA have inherent quantum properties. Recent research suggests that the quantum strangeness one often associates with physics laboratories may actually be having an effect on our DNA and playing a role in genetic mutations.

The fault in our DNA

Every cell in our body has 3 billion nucleotides in each DNA strand — a coded recipe book for all of the proteins that make us structurally and functionally a human being. Any change in this code of four nucleotides constitutes a mutation; it changes the recipe, producing an entirely useless protein or a protein with a completely different function that could be harmful to the cells that produced it. These mutations can be a single nucleotide variation, a translocation, deletion or insertion of a chunk of DNA. Each of us has 0.1% single base variation in our DNA that makes us different from one another. However, some of these variations can be disastrous, causing genetic disorders like cystic fibrosis, muscular dystrophy and the leading cause of death today — cancer.

But how are these mutations caused?

DNA is composed of four molecules — adenine, guanine, thymine and cytosine — A, G, T and C. These bases pair with one another in a set fashion: A pairs with T, and C pairs with G. The pairs are joined by hydrogen bonds to form the double helix structure of DNA. This is just like a ladder, twisted helically with the rungs being hydrogen bonds (figure 1). So, if A is replaced with G in one strand, during DNA replication, the other strand will have a C incorporated, instead of T. This is called a point mutation — a change in a single base pair. This may change the code of the DNA in important places, which can have deleterious results, such as affecting or halting protein production altogether, and can be responsible for altering many important life processes.

Quantum biologists believe that the cause of these point mutations may be attributed to quantum tunnelling. At the atomic scale, every particle exhibits a dual nature known as wave-particle duality, made famous by Young’s double slit experiment that some of you may remember from high school physics 1.

The quantum properties of matter fail to be observable as a particle’s mass increases. That is to say, no matter how hard you throw a ball at a wall, it will not pass through it (without taking some of the wall with it). But at the subatomic level, particles can have wave-like properties; having no specific position in space. This means electrons can tunnel through an obstacle instead of climbing over it, like a ghost passing through a wall 2. 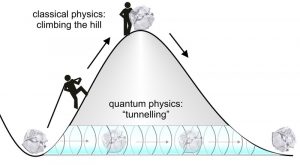 Figure 3. In classical mechanics, if you were to move a stone up a hill, it would require a lot of external force. But in the quantum world, the particles exhibit wave-like property — hence, they can just pass through the hill, bypassing the energy barrier. Credits: https://www.mpg.de/549767/pressRelease20070412

The idea of quantum mechanics’ role in biology was first proposed by the great physicist Erwin Schrödinger. Even before the discovery of the structure of DNA, Schrödinger had proposed that “the inheritance of our genes from our parents is too perfect to be governed by the rules of classical mechanics and quantum mechanics must play a role in it”.DNA, being a long-chain molecule, is not always stable. We have all heard about how factors like UV rays and reactive oxygen species can cause DNA damage. But even in the absence of these external factors, it is evident that DNA can still acquire point mutations.

So, how can DNA acquire mutations just like that?

As mentioned earlier, the double helix of DNA is formed by the hydrogen bonds between the bases. According to the Watson and Crick model of DNA, the protons forming these hydrogen bonds must be stable. But sometimes, these hydrogen ions can undergo transient shifts in their positions. This is called tautomerism (figure 4). In these rare tautomeric forms, the proton forming the hydrogen bond can shift from one base to the other — the proton of cytosine (C) can jump over to guanine (G) through quantum tunnelling. If DNA replication occurs during one of these instantaneous tautomeric shifts, the protons and the corresponding bases will be in the wrong orientation.This change can lead to incorrect base pairing — C will end up pairing with A instead of G and so on. This is an example of a point mutation without the requirement for any external factor to drive it.

Figure 4. Normal and anomalous DNA base pairing. Part (b) shows the rare tautomeric forms of the DNA bases. Credits: http://www.bio.miami.edu/dana/250/250SS15_14print.html 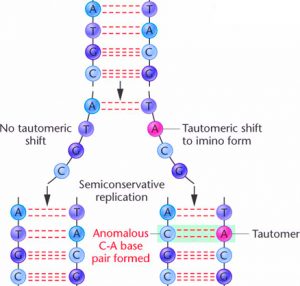 Figure 5. How point mutations occur during DNA replication due to tautomerization. Credits: http://www.bio.miami.edu/dana/250/250SS15_14print.html

You can read more about this here3. Quantum biology has also been a key player in research into enzyme activity, photosynthesis, and the migration of birds to name a few.
This field of science is still in its infancy, but it can help us understand the causes of spontaneous mutations. Knowing the basic science behind a phenomenon is of utmost importance as it can helps us in seeing the bigger picture. This can be related to the development of cancer, for example, which is a result of an accumulation of many spontaneous mutations within cells. Quantum tunnelling may explain the basis of these mutations. The same can be used to explain the occurrence of genetic disorders caused by spontaneous point mutations, without any family history. There has to be an explanation for how the DNA in an egg or sperm randomly mutates leading to the birth of a foetus affected by Marfan syndrome or neurofibromatosis, for example. Nonetheless, the field of quantum biology makes us realise how all of the branches of science are interlinked, and ultimately life is just a fuzzy coalition of physics, chemistry and biology.

This article was specialist edited by Derek Connor and copy edited by Kimberley Wood.