Multiple Sclerosis: The Truth is Out There

I’m a changing man. The more I know, the less I understand.

I can only presume Paul Weller was talking about science in general and Multiple Sclerosis (MS) in particular with these wise words. This article describes the ongoing search for the cause of MS, whilst highlighting the leaps forward that have been made in its treatment.

Research into MS has grown exponentially in the past decade. There has been a particular focus on treatments which aim to modify the course of the disease: in true prosaic scientific fashion, these are known as Disease-Modifying Treatments (DMTs). The number of licensed DMTs available for patients has almost tripled in the past 10 years and there are more to come. However, despite these advances, we are not much further along in our understanding of the cause(s) of MS than we were in the 1970s. This is a puzzling dichotomy. The Modfather reference reflects both the uncertain literature on the causes of MS and the meeting of art and science in treatment decisions.

MS is a disease of the central nervous system, which affects around 2 million people worldwide 1 and is particularly common in Scotland 2. Inflammation and degeneration within the brain and spinal cord, causing the disabling symptoms in MS, are hugely variable in severity, resulting in limited predictability of outcomes in an individual. The most common type of MS results in episodic brain and/or spinal cord inflammation. This causes disruption of whatever function that particular neurological region serves, resulting in visual loss, a weak limb or changes in sensation, for example. These are known as ‘relapses’ and are usually reflected by abnormalities on brain or spinal cord scans (See Figure 1).Whilst these can be debilitating,they usually improve. However, some patents are left with permanent disability and this typically worsens over time. 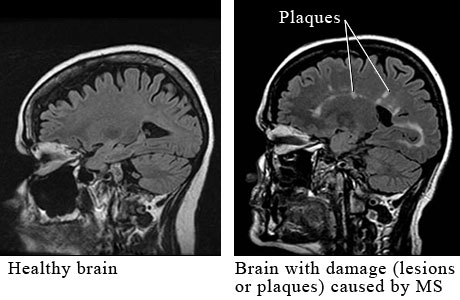 Any published paper on MS you care to peruse will generally start with something along the lines of ‘MS is an acquired autoimmune inflammatory condition of the central nervous system’. Whilst this description appears to have been granted factual status, often no longer even requiring a reference, it is a poor answer to the oft-asked question from sufferers ‘Why do I have MS?’.

There are a number of factors which seem to be important in increasing one’s risk of MS, but there remains no unifying theory – and also no Oscar-winning biopic. Genetic predisposition appears to be important, but is not the whole story. Certainly, MS is not passed onto children in a direct manner like some disorders. Genetic mutations related to immune system functions are over-represented in MS patients compared to non-MS controls, which further reinforces hypotheses on immune dysfunction or dysregulation as important 3.

Environmental factors such as Vitamin D deficiency and the Glandular Fever-causing Epstein-Barr Virus (EBV) are also implicated, due to epidemiological observations and very plausible biological mechanisms 4. More recently, smoking and dietary effects on the immune system have been described and some believe these lifestyle factors may explain the apparent increasing incidence of MS in Westernised countries 5

For much of the last century, MS was seen as a disease of inhabitants of Northern latitudes with low sunshine exposure. In fact, Scotland was thought to be the epicentre of MS, after studies showed the prevalence was higher here than anywhere else in the world 6, but it now seems likely on a par with other northern European countries with similar genetic makeup (See Figure 2). This latitudinal variation was the basis of the Vitamin D deficiency hypothesis, as we rely on ultraviolet light from sunshine exposure to produce this vitamin in our skin and it has a number of putative effects on the immune system, the lack of which may contribute to MS. However, the sunshine link has since been challenged 7 and, in fact, the global variations in MS could reflect migration patterns. Genetically predisposed people, most likely of Nordic origin, are often suggested as culpable. The possibility that these Nordic travellers spread a contagion of MS around the world has also been proposed by serious MS-ologists 8 and the potential of a chronic viral infection remains purported by some. Indeed, an entire issue of the well-respected Neuroepidemiology journal was given over to arguments and counter-arguments on this topic between decorated MS specialists in 1988. Yet, despite many years of research, no causative virus has been found and infections tend to get worse, rather than better, with use of immunosuppressant treatments (which many DMTs are) making this an unlikely single explanation. 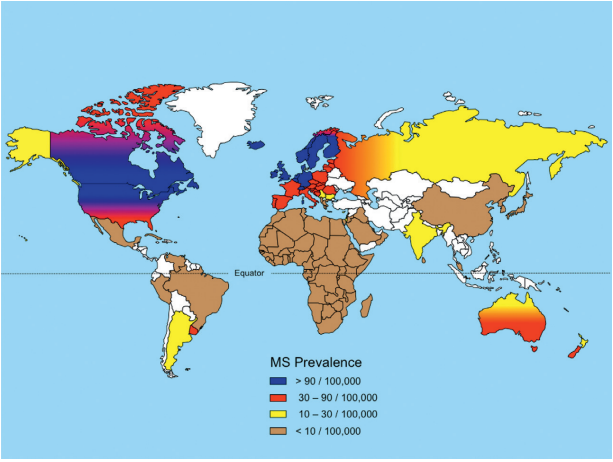 As alluded to, the causes of MS are highly contested in the literature and mainly result in a sense of misdirection. Highly-respected experts can have diametrically opposed views. The unsatisfying, but probably correct, answer is that MS occurs for a number of reasons. It may be that a ‘critical mass’ of factors coincide in the individual who develops the disease. Equally, it may be that genetic abnormalities are the main driving factor in some patients, whereas in others, it mainly relates to some environmental exposure, and a wide overlapping spectrum exists between these two extremes. One day, a venn diagram will explain it all neatly I’m sure. Until then, it seems MS is an acquired autoimmune inflammatory condition of the central nervous system…

Despite the lack of a neatly explained cause, the scientific community has forged ahead with treatments that modulate the immune system and they actually work. Licensed DMTs have been shown to be effective for some of the problems caused by MS, but not all.

The DMTs which have been developed, and are seen as standard care in healthcare systems that can afford them, have all been demonstrated to reduce the frequency of relapses and number of scan abnormalities. Uncertainty arises when disease outcomes beyond relapses and scan changes are considered, however. MS is a lifelong disease and occurs in young people, hence it is the long-term outlook which patients are usually concerned about and is the major cost to society. Yet the clinical trials of the DMTs used in MS are usually only undertaken over a few years: retaining methodological and ethical integrity for a study over 40-50 years is essentially impossible, never mind the cost, meaning we cannot demonstrate their long-term benefits in as robust a manner as the short-term outcomes described. Additionally, ‘unseen disability’, such as cognitive dysfunction, is less frequently measured and further muddies the water of the true impact of this disease, and its current treatments, in the long-term.

And so, we return to the art rather than the science. Treatment choices in MS are not precise calculations, but we do have effective treatments, despite a limited understanding of the condition. The progress of MS research and the development of these treatments is a testament to the success of the iterative scientific approach, yet also exposes the challenges of understanding and treating a complex condition. I fully believe the truth is out there and that, despite the complexities, we should not be Going Underground.

Dr Paul Gallagher is a Neurology Registrar at the Institute of Neurological Sciences in Glasgow, currently undertaking a research degree on Multiple Sclerosis.