In December 2015, Senator Jeff Flake published Wastebook: The Farce Awakens. A waste book is an informal report that details 100 ‘wastes’ in public expenditure and is meant to be read by the various news outlets of America, whom would ridicule the presumably ludicrous use of public money. Obviously, having your own research listed would be highly damaging to your reputation; this is where our subject comes into the spotlight — Sheila Patek, an associate Professor of Duke University, had her research on mantis shrimp and the weapons at their disposal listed as number 33: ‘Shrimp fight club’ in the waste book 1.

Roughly four months later, the Coalition to Promote Science Funding invited Sen. Flake to a poster session at Capitol Hill to see what Patek and other researchers were doing, allowing the scientists to defend their work against the claim that it was fruitless. Afterwards, it was reported that Sen. Flake was sympathetic to the research, saying “This has been enlightening, and we want to make sure we are accurate.”2 What made him change his mind? Why are Patek and her team looking at the mantis shrimp, and is it really useful research? Before we can answer, we need to know some mantis shrimp basics.

Stromatopods, more commonly known as mantis shrimp, are predatory crustaceans which have modified mouthparts, called ‘raptorial appendages’, that allow them to kill prey. The appendages are composed of four parts, the most important being the dactyl, whose shape depends on the species of mantis shrimp; varying from hammers to spears. For example, the peacock mantis shrimp (Odontodactylus scyllarus) has hammer-like raptorial appendages; they’re incredibly powerful, reaching up to speeds of up to 23 metres per second in water and can strike with a force of up to 1500 newtons, which is equivalent to a 22. caliber bullet fired from a hunting rifle 3. These incredible weapons are the focus of Patek’s research: how do mantis shrimp generate such devastating force? 4; 5. 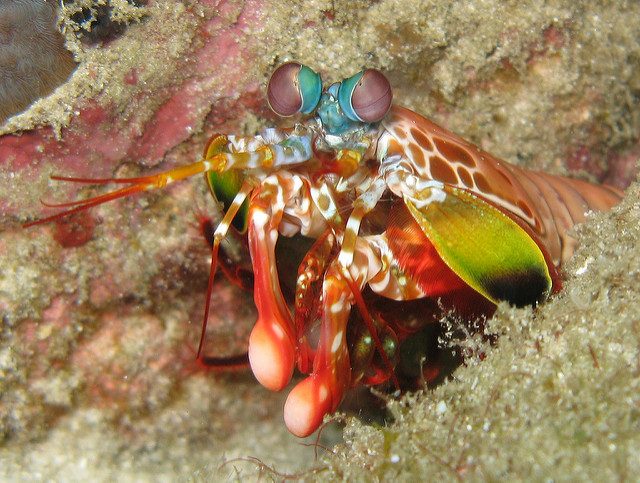 Credit: prllfish, via Flickr The aptly named peacock mantis shrimp is an ambush predator that lies within its burrow for most of the day, usually with its two excellent eyes at the top of the burrow that are used to spot prey. Once spotted, the mantis shrimp will smash the prey with the two hammers, which are pictured.

They utilise a process called ‘power amplification’, which describes the usage of several elastic structures, in conjunction with latches, to store and release kinetic energy. Human designs incorporate this concept in the form of crossbows, with the slow muscles of the human pulling back the bow, with energy then stored by a latch and ready to be released when the trigger is pulled. This allows the bolt to go much further than it would if merely thrown 6. The mantis shrimps’ own power amplification system uses two antagonistic muscles in the upper part of the appendage 7, the merus, to deliver the killing blow. In the first stage, the flexor muscles contract to activate the sub parts of the merus against the exoskeleton acting much like the latch of a crossbow; at the same time, the extensor muscles contract and bend saddle and ventral bars to store the kinetic energy as potential energy, which is analogous to the strings of a crossbow pulling the arms back as the string is pulled over the latch. When the mantis shrimp is ready to strike, the flexor muscles relax and the latch is released; the spring-like saddle and ventral bars rapidly return to their original shape, releasing the kinetic energy and sending the dactyl forward.

Related research done by David Kisailus 8 shows that the appendages get even more interesting. The forces at which they strike cause cavitation bubbles around their hammers and at the point of impact as they hit their target. A cavitation bubble is a small vapour bubble that forms as a result of rapid pressure change in the water; these bubbles then implode to give off kinetic energy, heat and light 9. The cavitation effect adds extra oomph to the power of the strike, making any unlucky snail, crab or bivalve trivial work for the peacock mantis shrimp.

It’s a problematic phenomenon for ships, because cavitation bubbles can cause dents and even holes in the propeller blades as they rotate quickly. However, the peacock mantis shrimps’ hammers never seem to suffer damage as a result of the cavitation effect, even though the hammers are made of chitin and calcium carbonate, which are considerably less tough than steel — so what’s going on with the hammers?

Kisailus discovered that the club is comprised of three layers. The outer impact region has high concentrations of hydroxyapatite crystals, which is the substance that gives our bones great compressive strength. Just before the outer impact region is the periodic site, which is mostly comprised of chitin; it isn’t as strong as the impact site but the arrangement makes up for it. The chitin fibres are arranged in helices; if any cracks do occur after repeated smashing of prey, the the energy of these cracks is dissipated in multiple directions along the spiral to avoid completely breaking the fibres 10. This contradicts conventional wisdom — usually engineers design armour or buildings to resist fracturing, while the peacock mantis shrimp allows fractures to occur but severely limits their growth to save the whole structure 11. 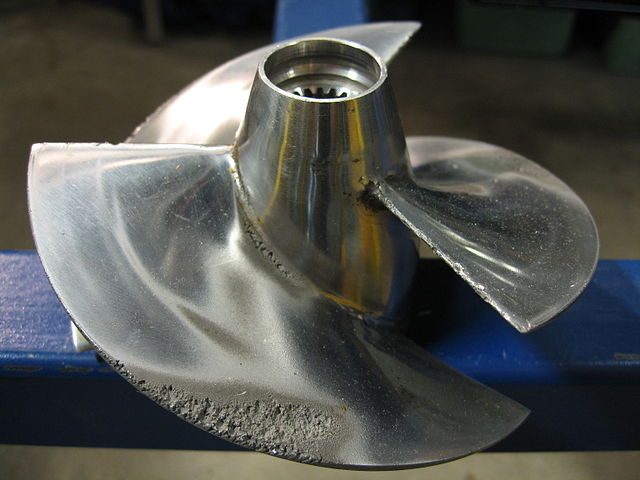 Credit: Axda0002, via Wikimedia commons Despite the propeller blade being made of a harder material, it has suffered severe cavitation damage on the outer edge; research into the mantis shrimp hammers could design blades that are less prone to such damage.

It’s clear that the work of Patek and Kisailus on mantis shrimp hammers have many benefits to human spheres of life; engineers could mimic the mechanisms of energy storage and release from Patek’s work to create stronger construction equipment or improved factory tools that don’t use much electricity. Kisailus’ work can be used to develop hardier building materials, better armour, and superior shock absorbers for high power tools 12.

This is what impressed Sen. Flake so much at the poster session, however, Patek stated that such research is not done with these goals in mind but rather for the sake of discovery itself and that such research is best done for this purpose 13. This is not the first time that a science for the sake of knowledge itself has paid off; the identification of the green fluorescent protein from jellyfish was initially the result of Osamu Shimomura’s personal interest in why jellyfish glow green. The same protein can be artificially made by scientists in a lab, providing them with a powerful tool to track what is happening inside human cells without killing them — allowing great strides to be made in medicine 14. It seems that if society wants science to be of public benefit, it will sometimes have to fund research that may not have obvious practical use; which is a risk for all scientific endeavors, even science with the intent of finding something immediately useful to us. However, the rewards are so great that the risks are indeed worth it.