Epigenetic Engineering — The Next Generation of Gene Editing

Pick an unwanted personal trait you wish you could change. It could be a physical detail or character flaw gradually developed during your lifetime, like caffeine addiction, a fear of closed spaces, or being an aggressive drunk. Or how about a life threatening condition — diabetes, depression or cancer?

These are all caused by unwelcome changes in your genes during your lifetime. But what if such genetic modifications could be corrected?

After decades of designing gene editing toolkits, researchers have closed the gap between science fiction and reality. They have developed the most efficient tool yet — the CRISPR-Cas9 system. Even the smallest mention of CRISPR illuminates the eyes of a biomolecular scientist, and the next step is to ignite curiosity in everyone else.

Firstly — what is epigenetics?

The biological code of life is essentially conserved so that instructions for survival are not lost between generations. However, the time and quantity of gene expression varies between cell types, providing them with specific properties at specific times. Ever wondered why twins with identical DNA still manage to have fantastically unique quirks?

Our behaviour and environment can cause changes in our gene expression; this variability is called epigenetics. Epigenetics is mediated through punctuating the grammarless pages of the genetic novel — determining which DNA sequences to express and which to keep quiet. Attaching non-coding RNAs or methyl groups to the DNA strand can silence a gene completely, whereas adding various molecules on DNA reeling proteins shifts the overall arrangement and availability of the stupendously long molecule.

Although epigenetics is a budding field, scientists have discovered links between the loss of epigenetic control and the development of diseases. These include many forms of cancer. Acute myeloid leukemia, for example, is caused by hypermethylation — over silencing — of tumour suppressive genes. Epigenetics is also suspected to play a role in obesity, diabetes, heart disease, and various mental conditions like autism and depression.

So if epigenetic control derails, a vile condition may follow. Got it. And how does CRISPR fit into the equation?

How CRISPR-Cas9 edits our genome

CRISPR-Cas9 is a DNA-shredding mechanism, shamefully stolen from the immune system of bacteria. When a foreign organism invades a cell, fractions of its DNA can become embedded in the host DNA. These jumbled regions are called — much to our misfortune — clustered regularly interspaced short palindromic repeats (CRISPR). CRISPR sequences are then processed into small guide RNAs, each designed to mirror the CRISPR locus. These complementary guides are stamped onto a DNA snipping enzyme — the CRISPR associated protein 9 (Cas9). Guide RNAs direct Cas9 to the CRISPR site, where it creates a double-stranded break. The damaged region becomes subjected to sloppy DNA repair, leaving permanent mutations behind 1. 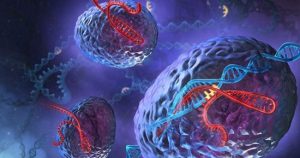 Image 1: Seen here are Cas9 enzymes bound to guide RNA strands (red), enabling them to hunt down the target sequence (yellow) from the incredibly vast genome.

Ready-made guide RNAs remain in the cell and act like antibodies, providing lasting immunity by recognising a returning invader. We can use the target specificity of CRISPR-Cas9 to our advantage. Guide RNAs are hand-designed so that potentially any gene could be targeted and mutated.

As you can expect, the technology has unlocked unforeseen opportunities for studying what genes do, and how their function is regulated.

The advantage of epigenetic modification is the ability to change gene expression without causing permanent DNA damage. We can modify the splicing domain of Cas9 and create a deactivated enzyme (dCas9) that binds to the target gene but cannot make a double-strand cut.

We can take this innovation a step further. Pasting epigenetic modifying features from other enzymes directly onto dCas9 transforms the broken scissors into a multifunctional Swiss Army Knife. These so-called effector domains either activate or repress a gene, and they can be easily glued onto dCas9’s tiny back 2.

Since effectors can be piled up like Legos, various molecular systems have been designed to pump up the efficiency of dCas9. Effectors can be linked together like chains, tagged onto a dangling polypeptide tail or directly onto the guide RNA. 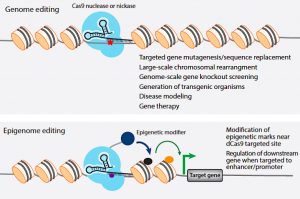 Epigenetic engineering can be used to modify disease-causing epigenetic tags in our DNA. CRISPR-controlled editing could therefore spark a revolution in cellular reprogramming and human therapeutics.

In June 2016, researchers demonstrated the technology’s potential. They reactivated the fighting power of immune cells against invasive tumours. CRISPR was used to upregulate cancer recognising genes in human T-cells, which are often turned off by growing tumours. T-cells were therefore reprogrammed to home in on cancer cells and target them for elimination. This method has already been green-lighted by the National Institute of Health, and is quickly being pushed for human trials 3.

The flow of publications on the prospects of epigenetic editing seems to be merely picking up speed. Invasive genes of HIV could be diminished in-vivo 4; silencing the mutated BCL11A gene could cure sickle cell disease and beta-thalassemia 5; treating retinitis pigmentosa in pluripotent stem cells could revert blindness 6; eliminating thickening protein plaque could cure Alzheimer’s and Parkinson’s disease 7.

But despite all this potential, how far can we, or should we, go?

Ethical concerns and challenges for the future

It is difficult to predict how far the CRISPR machinery will develop and how it will impact medical research. However, fast advances in the field have raised public discussion on the ethical, social and legal implications of genetically modified humans. As the technology becomes increasingly applicable, the temptation to use CRISPR-Cas9 for non-therapeutic gene enhancement will correlate. David Baltimore, of the California Institute of Technology, states that one of the concerns of CRISPR is how it “might be used prematurely or in ways that might be viewed as inappropriate”  8. Private companies could make easy profit from cosmetic genome editing, encouraging the loss of human diversity and the rise of eugenics, steering us straight into a world of ‘designer babies’.

However, epigenome editing is still in its own infancy. CRISPR-Cas9 continues to face many technical challenges, especially with its specificity and delivery to the target gene. The machinery relies on finding a single molecular needle in a haystack of billions, and off-target mistakes are catastrophic. Personalised therapies would involve modification of millions of cells, and the immune reaction to a genome-wide screen remains unclear. Furthermore, specialised effector and guide RNA constructs are difficult to introduce into cells, and easy single-vector delivery methods are yet to be developed.

Regardless, the prospects of CRISPR for gene therapy are universally accepted. As with any new invention, we are hurried by excitement and unnerved by uncertainty.

These two wondrous pedals of human curiosity will drive our advancements in the future.

This article was specialist edited by Alisha Aman and copy-edited by Kimberley Wood.

I am a BSc Honours student of Molecular and Cellular Biology (MCB) in the University of Glasgow. I am interested in biotechnology and analysing mutations in complex cellular systems. I enjoy mind-bending books, visual art and music. I express myself through writing; you can spot me in your local coffee shop, scribbling vigorously into a small notebook. I expand my comfort zone through travelling, meeting new people and picking up skills such as ballet, acoustic guitar, vegan cooking and blogging. I embrace quiet solitude, and practice mindfulness through yoga, meditation and minimalism. Overall, I am devoted to a conscious lifestyle, and living in the moment.

Need a mid-day pick-me-up?
How about some Mars rover?

Interact with a 3D model of @NASAPersevere created in collaboration with @GoogleArts: https://go.nasa.gov/3swMjuf

I don’t understand why we just wouldn’t continue to wear masks anyway? If we can? Surely this is a sensible measure to continue with in enclosed spaces like trains etc

LIVE🔴
I've sent back the videos I took of my Mars landing. It was quite the ride! Tune in to see this one-of-a-kind footage and some of my latest pics of Jezero Crater. Comment your questions below or use #CountdownToMars.