Does Rock Music Make You Happier?

I’m waiting in my cold cell,
when the bell begins to chime.
Reflecting on my past life and it doesn’t have much time,
‘Cause at 5 o’clock they take me to the Gallows Pole.

The sands of time for me are running low.
When the priest comes to read me the last rites,
I take a look through the bars at the last sights,
Of a world that has gone very wrong for me.

For those of you not versed in the metal music scene, the above is the opening two verses from “Hallowed Be Thy Name” by Iron Maiden released in 1998. If you are listening to, or already know the track, you’ll hear that it’s quite a slow melody with a thumping drumbeat that quickly gains speed and that classic guitar riff comes ringing in. The lyrics are about a man who is awaiting execution at the gallows as he realises that he is very afraid of dying; and the song depicts this fear and his eventual execution. Cheery, huh?

Well, actually, yes! The Guardian recently published an article titled “Metal fans turn out to be happier than everyone else” last month 1. The title would make it seem like a surprise find! Fortunately enough for this GISTer, the journalist at the Guardian did good and actually cited the scientific study that found these results 2. So let’s investigate the science behind this – does metal music actually make people happier? And if so, what is it about metal music that makes people happy?

But first of all let’s get one thing straight, metal music is never going to make you happy if you simply don’t like it. One of the best things about the world of music is the diversity – we all have different tastes in music and music styles. Thundering drums, screeching guitars, and lyrics screamed out of some hairy guy wearing a tattered tank is not going to make everyone happy if they don’t like that style! I wouldn’t want to give away the scientific findings right at the beginning of the article, but just a little disclaimer that this is not indicative of everyone and if you don’t want to mosh, you don’t have to!

Peaking in the 1980s and 1990s – topping the charts and best sellers, everyone can at least describe what heavy metal music is. It has taken its fair share of media flak over the years, with artists being sued by parents of children who had committed suicide purely because of the music that they listened to. This issue was brought up recently by the Daily Mail regarding the emo band My Chemical Romance. Parents of teenagers listening to “emo music” accused the band of causing a rise in teenage depression and suicide, because the bands’ music is laced with dark themes and lyrics such as “I’m not okay” which were seen to glorify mental health issues. 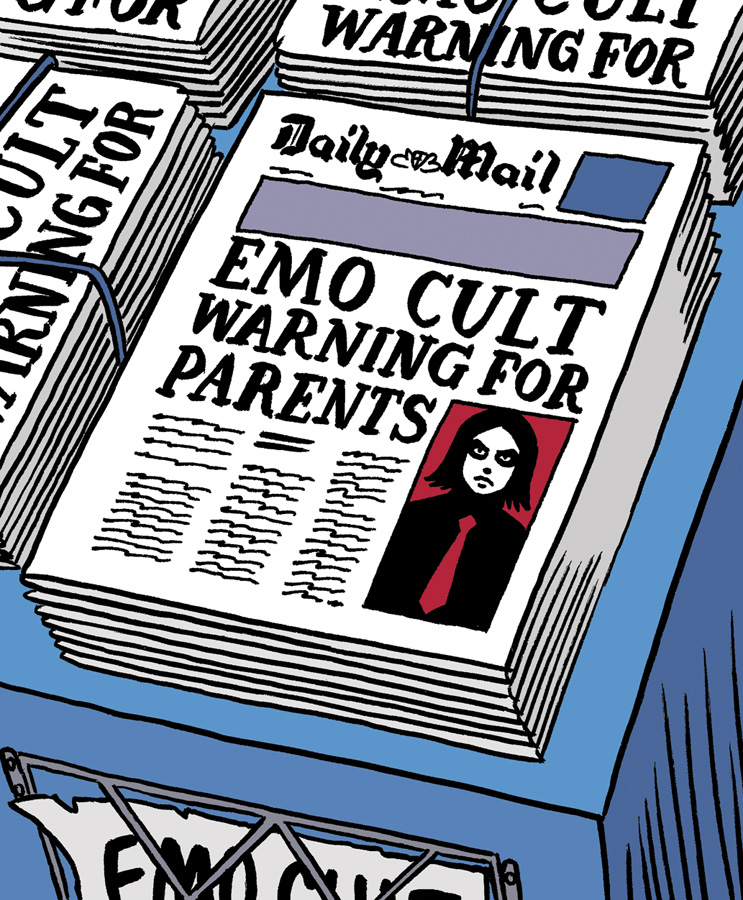 There was also that time that someone played Stairway to Heaven by Led Zeppelin backwards and claimed they heard messages referring to satanic beliefs, and therefore the song had the implicit purpose of converting people to satanism – find out more on this youtube video.

So with all the media press gearing us up to blame metal music for causing satanic worship and teenage suicide, why did the recent study find it actually made people happier? Let’s look at the study specifically in more detail. The study had a large sample of many groups of people in their “metal listeners” cohort; from those who used to listen to metal music, to those who still listen to metal music, and even those who played metal music professionally. This group, the “metal group” let’s call them, were asked whether any difficulties occurred in their childhood and what their relationship with their parents was like growing up. Compared to typical present day university students, people who listened to metal music in the 80s had no significant difference in occurrence of childhood trauma. Metal listeners also did not attempt suicide any more frequently than the group of current students. Although they did engage in more underage drinking, sex and risky behaviours (such as, drinking and sexing at the same time!), metal listeners were not significantly any less happy with their lives, then and now, than current college students.

However, past and current “groupies” of metal bands were found to have higher rates of depression and anxiety, and were more likely to have an abnormal family. But disregarding groupies, there were no significant differences found in ratings of current happiness between those who listened to metal music (in the present) and those who did not listen to metal music. Interestingly, the group that listened to metal were actually less likely to have regrets from their childhood and adolescence, so maybe that newspaper article was a bit misleading. What the study actually found was that metal heads were no less distressed, depressed or dysfunctional adults than people who never listened to metal music. So listening to metal music specifically doesn’t necessarily make you a happier person, but there seems to be a correlation with social and occupational achievement as well as adjustment. But why?

Well, the study concludes with the idea that social groups (i.e. metal heads, goths, rockers) provides some sort of protective bubble against feeling distressed or depressed in response to life’s difficulties. For example, whilst the metal heads of the 80s were more likely to have unsafe sex and get drunk underage, the fact that they had this group that they belonged in reduced the negative consequences of that risky behaviour. So for example, there is a less negative consequence to underage drinking if someone does it in a group, with lots of other people doing the same thing than there is to someone doing that alone. There are lots of reasons why this might be the case, such as having someone else to help if there is an occurring danger, or being less embarrassed by underage drinking because “everyone else is doing it.” Indeed, another study, not specifically on metal listeners, has shown that being part of a social group reduces the occurrence of depression and anxiety 3. So maybe it wasn’t the metal music that necessarily protected the metalheads from a dysfunctional lifestyle, but rather it was being a member of a close knitted group that protected them.

So, if you listen to metal music already, keep listening! For there are lots of benefits, including a statistically healthier and wholesome life. However, as I mentioned before, the science really does only prove that it works for people who are actually fans of metal music. Listening to metal music on a one-off occasion might not take much difference to your life, especially if that is not to your taste. Being part of a group of people with similar tastes, listening to similar music with similar hobbies is what makes us happy. So to answer my initial question, metal music can make you happier, but only if you actually like metal in the first place!

Margaret Laurie is a Psychology student at the University of Glasgow with a keen interest in neuroscience and atypical psychology.