A study published last January claiming that drinking more coffee can reduce the risk of liver damage caused by excessive alcohol use quickly went viral on the internet and is still doing the rounds on social media. Is it too good to be true, or should we alternate Friday night shots with shots of espresso from now on?

The study in question was performed by researchers at the University of Southampton in the UK, in the form of a systematic review with meta-analysis 1. This means that the researchers have combined all the research on this topic performed by other scientists across the world, critically analysed the studies, and summarised the results. They then apply statistics to the results of these different studies to draw an overall conclusion.

The researchers set out to investigate the relationship between drinking coffee and liver cirrhosis. Cirrhosis is ‘scarring’ of the liver tissue that develops when the liver has been damaged over a long period of time. The scar tissue gradually replaces healthy liver tissue, which compromises normal liver function and can cause many health problems. According to the NHS, around 4,000 people die every year as a consequence of liver cirrhosis in the UK 2. Liver cirrhosis is most commonly caused by long-term alcohol abuse, hepatitis C infection, and non-alcoholic steatohepatitis (NASH). NASH can occur in obesity when excess fat builds up inside the liver tissue, leading to liver inflammation. Unfortunately, there is no cure for cirrhosis. In the early stages the healthy parts of the liver are still able to function well enough, but if the scarring is very extensive, the liver will fail and patients need a transplant to stay alive. 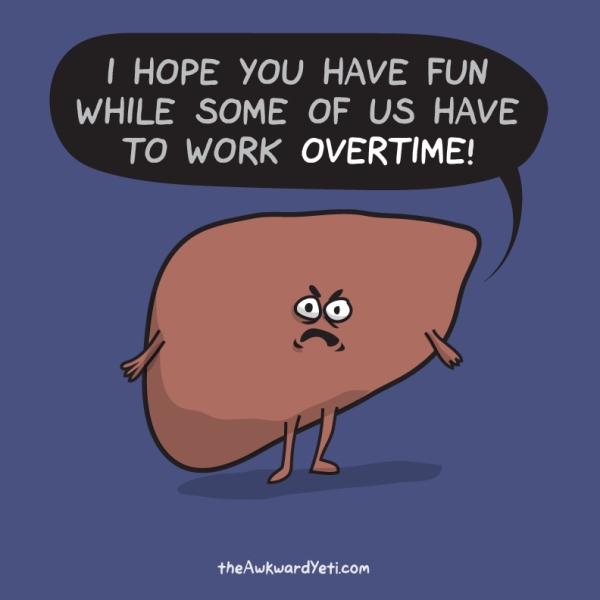 Our liver is a critical organ for metabolism and also protects us from toxic substances such as caffeine, alcohol, and other drugs. Image credit: The Awkward Yeti, http://theawkwardyeti.com/

After combining all of these studies, the Southampton researchers calculated the relative risk of developing liver cirrhosis when drinking two extra cups of coffee per day. They calculated that drinking two more cups of coffee reduced the risk of liver cirrhosis in eight out of nine studies, and by 40% on average; alas, sensationalist news headlines were born. Reuters, for example, headlined that “Drinking more coffee may undo liver damage from booze” 3. This was then picked up on by many other websites, despite the fact that liver cirrhosis is an irreversible disease and the research article itself did not support such strong claims at all.

It is important to understand the limitations of the cohort and case-control studies that were used in the meta-analysis. Scientifically speaking, both are called “observational” studies, because scientists just “observe” groups of people without performing any interventions or experiments. Therefore, we can only conclude that two things occur together (i.e. increased coffee consumption correlates with decreased risk of liver cirrhosis), but we cannot conclude that one thing causes the other. It could be that A causes B, but it could also be that A co-occurs with C, and it is C that causes B. In the current study, it could be that coffee drinkers also drink less alcohol, or have a healthier body weight, or exercise more, or smoke less; all of which could lead to a decreased risk of developing liver cirrhosis. Such factors that correlate with both the behaviour (coffee drinking) and the outcome (cirrhosis) being studied are called ‘confounders’. Scientists can correct for the influence of confounders on correlations by adjusting their statistical models for these factors, in order to determine whether the association between behaviour and outcome still holds true.

This graph shows a perfect correlation between margarine consumption and divorce rate in Maine – an example that correlation does not necessarily imply causation. Image credit: Spurious Correlations by Tyler Vigen http://www.tylervigen.com/spurious-correlations. Licence: https://creativecommons.org/licenses/by/4.0/

All studies included in this meta-analysis adjusted for alcohol consumption, the main risk factor for developing liver cirrhosis. However, only six of the nine studies adjusted for age, gender, and body mass index, and only four studies adjusted for diabetes. Importantly, there could be many other lifestyle and dietary factors that could further influence the risk of developing liver cirrhosis that were not taken into account in the original studies. The Southampton researchers note that liver cirrhosis is a late stage of liver disease and is preceded by decreased liver function, which would lead to slower metabolism of coffee. People with early stage liver disease may therefore drink less coffee to begin with, which would influence the results. Particularly in the case-control studies, subjects with cirrhosis may have stopped drinking coffee altogether to spare their liver, and therefore might report that they do not drink much coffee, even though they may have done so in the past. In studies such as these, where participants are asked to estimate their average daily consumption, the information subjects give may therefore not always be accurate.

This all means that we need to view the association between coffee drinking and development of liver cirrhosis in light of these study limitations. Most importantly, we need to realise the difference between correlation and causation. Unfortunately, even though the researchers have taken great care to report their results with all the precautions and limitations of the study designs, the media often does not take these into account. This leads to the publication of sensationalist articles that lead us to believe that as long as we alternate boozing with caffeinating, our livers will be fine. This happens often when it comes to science news and the media, and is funnily summarised by Jorge Cham in this comic from his website PhDcomics.com:

Coffee is one of the most popular drinks around the world and is a mixture of many different chemical compounds. Every once in awhile it surfaces in the news with claims of magical health benefits, as do many other drinks, foods, or chemicals. In such cases, it is best to remember that our overall health is a combination of genetics, diet, physical activity, mental wellbeing, and avoidance of risky behaviours such as smoking and excessive drinking. One single drink, food, or chemical is unlikely to overrule the combined effect of these factors. Although enjoying the occasional coffee or alcoholic drink may be pleasant, when it comes to liver cirrhosis, moderation certainly triumphs combination.

Jiska van der Reest is a PhD student at the CRUK Beatson Institute for Cancer Research in Glasgow. Before switching to cancer research, she studied Nutrition & Health in the Netherlands. Between raindrops, she likes to explore the Great Scottish Outdoors!