Buzzword or bête noire, ‘Big Data’ may be a familiar phrase, but there is no clear definition of what it comprises. According to the man who coined the phrase (John Mashey of Silicon Graphics) Big Data is ‘a simple phrase representing a challenging range of issues’ 1 With his intriguing words ringing in my ears and other preconceptions in tow, I visited the Big Bang Data exhibition in Somerset House (London; Big Bang Data exhibition at Somerset House (London; which ran till 20th March 2016 2) where I found unexpected insights to the concept.

For starters, you are awakened by Internet Machine, a video display by Timo Arnall breaking down two misconceptions: first that data do not take any space and second that it is silent. The bumblebee drone of the voluminous computers’ cooling systems in a so-called ‘data centre’ took me back to the days when connecting to the internet was a time-devouring chore accompanied by its own distinctive soundtrack – the magical dial-up tune (recreated here – listen to its nostalgic-yet-annoying soundtrack: 3 ).

You then move into data.tron, a dizzying sequence of pixels and numbers by Ryoji Ikeda accentuating the visual dimension. From a rainbow set of matrices you walk through a colour explosion of maps and globes.  Stepping on the  complex submarine network of fibre-optic internet cables (Telegeography by Markus Krisetya et al) everything appears playful, but a closer look reveals that dealing with the London underground system (Networks of London by Ingrid Burrington and Dan Williams) is nothing compared to this mesh of lines which becomes particularly intricate in certain areas of the planet. Captivated by standing on top of the world, you walk onto a stage of photogenic globes (World Processor by Ingo Gunther, as pictured)  that invite you to reach out and spin them around to discover the whole picture, the trends and the patterns…unless you are told ’do not touch!’ (as I was). 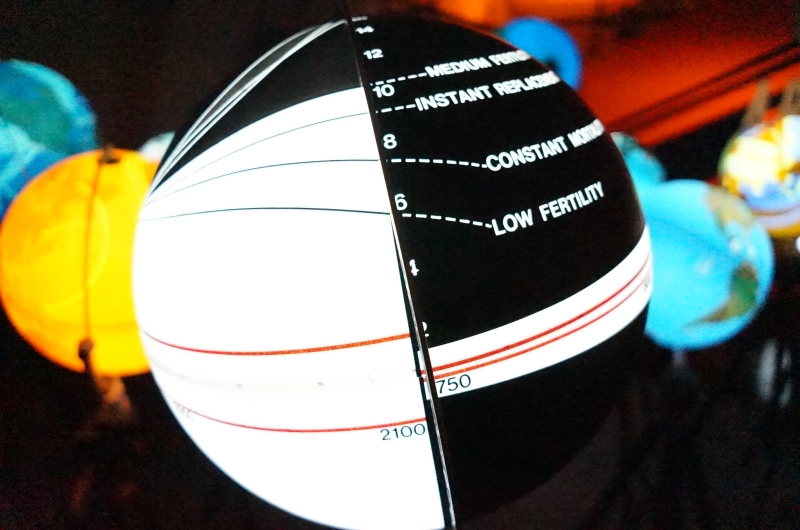 You so want to touch and spin these big data globes…World Processor by Ingo Gunther. Image Credit: Altea Lorenzo-Arribas

Big and getting ever bigger, one wonders where we are going to put Big Data. The show visualises the challenge in the form of bubbles whose content shrinks as its ability to contain amounts of data gets magnified.  The year 2002 is singled out with the astounding fact that this was the year when we crossed a threshold by storing more information digitally than in an analogue form. This has inevitably accentuated challenges in the ethical arena. The Others, by Eva and Franco Mattes, composed of 10,000 photos and songs from hacked computers and I  Know  Where Your Cat Lives, by Owen Munday extracted the location of publicly available pictures of pets (and consequently of their owners). Both expose the consequences of breaches in security at a very personal level and invite you to rethink a topic that cases like that of Snowden (PRISM Whistleblower: Interview with Edward Snowden, by Glen Greenwald and Laura Poitras) brought to the limelight. 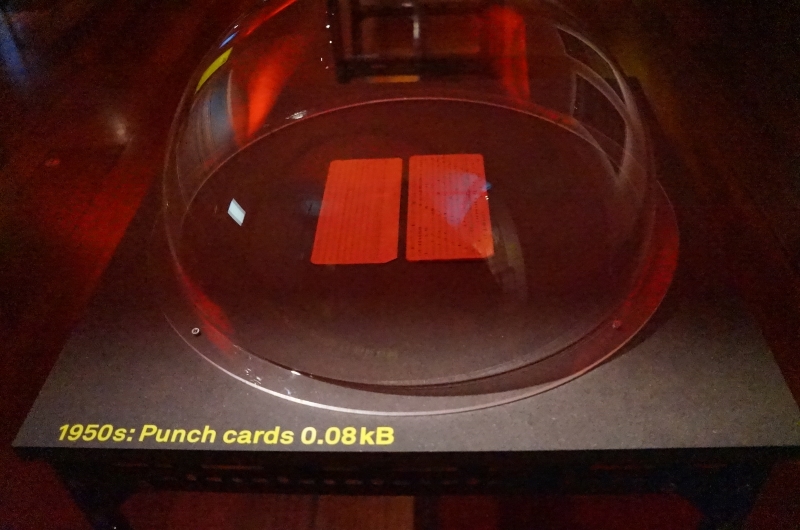 More than a standard exhibition, this is a sensorial experience that brings the concept closer to our daily life. Horst Ademeit’s carefully annotated pictures of clothes-drying racks and bicycles, and the ingeniously designed weekly postcards of Dear data, by Giorgia Lupi and Stefanie Posavec, make up a tangible and beautiful compilation of this ‘slow’ everyday big data.

If your sensory journey has left you feeling peckish, an edible installation by Ellie Harrison (of “Glasgow Effect” fame) completes your experience:  for every bad piece of news happening in the world, a vending machine pours a free bag of crisps, which gives big data a bitter-salted taste and puts you off fried potatoes at least for a while.

It occurs to me that there is a much deeper and less discipline-specific character to Big Data  than is often shown, which makes it particularly appealing, and I am left wondering what big data smells like…

Altea is an employee of BioSS studying for a PhD in Statistics at University of Glasgow, with an interest in socio-economic data.