We take it for granted that we are in complete control of our thoughts and actions. But what if I told you that the bacteria living in your intestines have the ability to influence your perceptions and behaviour? Well, a recent surge of research into the gastrointestinal (GI) tract has revealed that the organisms residing there may have the ability to communicate with the central nervous system (CNS) to alter brain development and function. These interactions may be involved in the development of schizophrenia by interfering with important processes associated with learning and memory, leading to cognitive dysfunction.

Intestinal bacteria, often referred to as gut microbes, are able to interact with the CNS through several mechanisms. These include the neural, hormonal and immune pathways, and have collectively been termed ‘the gut-brain axis’. The human body is home to a staggering number of microbes, with a ratio of around 1.3 bacteria to every human cell! We acquire this population of bacteria at birth when we come into contact with the environment outside the womb and it continues to develop as we grow older. The composition of microbiota can be influenced by a range of factors including genetics, diet, use of antibiotics and disease 1. In the womb, the brain begins life as the neural tube and undergoes a range of complex developmental stages before birth. This period is extremely vulnerable and neurodevelopment can be influenced by the mother’s stress levels, diet and infections, as these factors can interfere with the mother’s microbiota and cause transfer of harmful molecules to the embryo. Any problems at this critical early stage can affect the embryo by disturbing the structure and function of the brain. From birth, a relationship is forged between healthy bacteria and the human ‘host’ which is beneficial to both parties: the microbes provide us with several protective and metabolic functions and we provide the microbes with a safe environment in which to thrive. As the colonisation of the intestines at this early stage in life is thought to be important to development and have lifelong effects, it follows that any disruption may lead to disease.

There are thousands of different types of bacteria and while healthy people have some similarities, each individual person has their own unique composition. Whether or not a deviation from normal composition can lead to disease has recently been investigated in neurological disorders such as depression, autism and schizophrenia, as there appears to be a link between intestinal problems and psychiatric conditions. Schizophrenia is a major psychotic disorder which causes huge changes in the perceptions, emotions and behaviour of an affected person 2. There has been a huge amount of research into this mental illness, mainly focusing on genetics; thousands of small variations in the human genome (known as single nucleotide polymorphisms, or SNPs) have been discovered which are thought to account for around 30% of the risk of developing schizophrenia. Despite these findings, the exact mechanisms of how people develop schizophrenia are unknown, but it is clear that it involves a range of genetic and environmental factors. There are many symptoms linked to schizophrenia, such as hallucinations and delusions, but it is the cognitive symptoms (problems with learning and memory) which are thought to be caused by gut microbiota disruption.

So, how exactly do the bacteria in our intestines manage to affect our brain development? Well, there are two key players important for learning and memory which are thought to be involved: brain-derived neurotrophic factor (BDNF) and N-methyl-D-aspartate (NMDA) receptors. BDNF is a molecule which acts as a growth hormone for neurons, helping existing neurons to survive and encouraging the production of new ones. These processes are crucial to storing memories and learning new information. Studies have shown that mice without the BDNF gene have significant problems with completing learning and memory tasks 3, and those who have no BDNF gene at all die soon after birth on account of huge neurodevelopmental defects. This shows that BDNF is crucial to normal brain development. BDNF upregulates the NMDA receptors which are found on excitatory neurons in the brain (particularly in the hippocampus, the main brain area associated with learning and memory). In a pioneering study in 2004 4, scientists found that mice without microbes (known as germ-free or GF mice) had lower levels of BDNF in the hippocampus, as well as exhibiting behavioural changes. When the investigators treated the mice with bacteria, their behaviour returned to normal, which suggests that these changes were caused by the microbiota. In addition, drugs which block or inhibit NMDA receptors cause symptoms which mimic schizophrenia in healthy subjects (such as hallucinations), whereas drugs which enhance the NMDA receptors are able to reduce these symptoms in schizophrenic patients. This serves as further evidence that the receptor is involved in the mechanisms behind schizophrenia and highlights that it could be a useful area to target for treatment of psychiatric disorders.

The interaction of BDNF and NMDA receptors are thought to contribute to the pathogenesis of schizophrenia and produce the cognitive deficits which are characteristic of the disorder. The theory is that the gut microbes of a schizophrenic person are disturbed in some way at an early developmental stage. This change in the composition of microbes causes a reduction in levels of BDNF (post-mortem investigation of schizophrenic brains have shown a decrease in the levels of BDNF). If there is less BDNF to bind to NMDA receptors, these receptors become dysfunctional 5 and, because they normally play a key role in learning and memory, this causes problems with cognition in the patient. 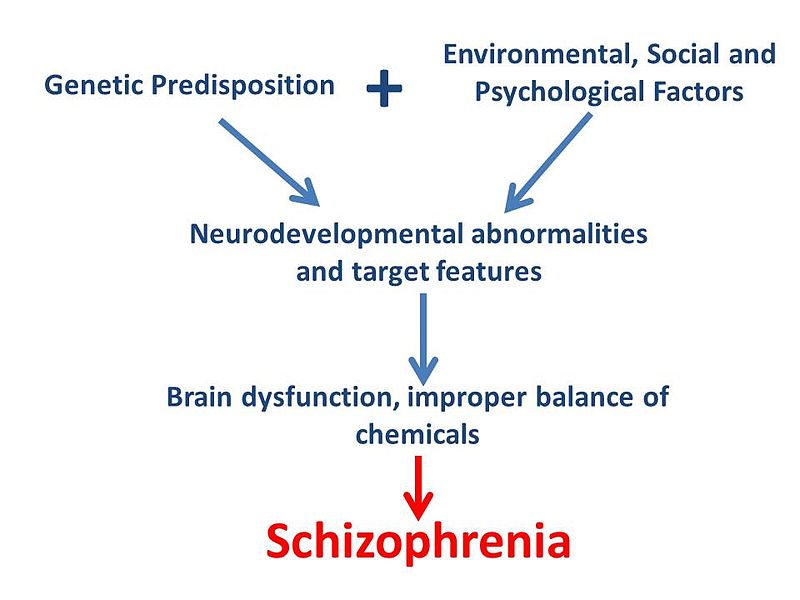 As mentioned previously, schizophrenia is multifactorial as it does not have one specific cause. The disruption of gut microbes (and subsequently BDNF and NMDA receptors) is just one piece of a much larger puzzle; genetics and other environmental factors must also be taken into account in order to fully understand schizophrenia pathology. Looking to the gut microbes for the cause of brain disorders is a new area of research which still has a long way to go. However, current findings are extremely fascinating and hold promise for further understanding and treatment of a range of disorders in the future.

This article was specialist edited by Emily O’Connor and copy edited by Matthew Hayhow.

Raeesah Maqsood is a final year undergraduate at the University of Glasgow studying Physiology and runs a science blog in her spare time which can be found at biobitesblog.wordpress.com