Depression, a disorder that creeps silently into many people’s lives. It is that constant feeling of worthlessness and guilt, where we are just unhappy mostly for no reason at all, and we lose all interest in everything that we love. You feel down all the time, become overly sensitive to the words spoken around you, and feel like a burden to everyone. It is the 3rd leading cause of disability in Europe. It is not merely a chemical imbalance in the brain, it is a systemic illness that affects your entire body 1.  It can take many forms, as mentioned here2. Most people are classified as having Major Depressive Disorder (MDD). The quest to understand the biology of depression and find its root cause has been going on for decades; currently various factors are held responsible for it, from genes to the environment or some balance in between.

Why do you get depressed?

Our brain is made up of millions of neurons that communicate with one another and it plays God, controlling all the processes going on in our body, including our mood and memories. At the centre of the layers of neurons we have the limbic system: the emotion and memory control region. It has three main structures: the amygdala which triggers emotions, thalamus which receives sensory information and relays them to appropriate regions of the brain, and the hippocampus that forms memory and collaborates with the amygdala to link any activity with our emotions, like the happiness when we see someone we love. How do these neurons communicate? Through neurotransmitters, any stimulus is converted to electrical signals and relayed by a neuron at the terminal. This neuron secretes chemical messengers called neurotransmitters that bind to the required receptors. This either excites or inhibits the neighboring neuron. The brain maintains certain levels of all the neurotransmitters for optimum functioning; hence, when there is an imbalance, things don’t work properly and there are consequences, and depression might be one of them. 3. This imbalance of neurotransmitters however, doesn’t cause MDD directly. It leads to the death of the neurons in the hippocampus. Recent studies have found that the hippocampus shrinks by 9-13% in chronically depressed people. When given drugs, these neurons seem to grow back (neurogenesis) and their mood seems to improve. The main point here is that it takes weeks, and this is one of the main reasons why drugs for depression don’t work right away.

Now, what actually causes this disruption?

When the genes falter:

The approximately 20,000 genes in each of our cells produce precisely the right proteins to keep us functioning, but genes do falter sometimes, and genetics contributes to depression. Studies have shown that the heritability of depression is around 40-50%, and this risk increases 3-4 fold if you are a first degree relative (sibling/children) of someone with MDD. Depression is a very complex disease, and we cannot pin-point a single causative factor. No single gene is necessary or sufficient to cause depression, and each of the identified candidate genes contributes some fraction to depression. However, no one inherits depression as such, we just inherit a certain combination of genes that might predispose us to the risk of developing depression 4.

Many of the studies done to find the genetic links have focused on genes for serotonin and dopamine transporters. The Genome Wide Association Studies (GWAS), are studies of the common genetic variations, known as the SNP or single nucleotide polymorphisms (the variants carried by at least 5% of the population), across individuals that have played a major role in providing  fresh insight into the genetic link to depression. To date, fourteen GWAS have been conducted for MDD and other depressive symptoms. There have been many candidate genes for depression, but GWAS couldn’t prove the associations, mainly because depression is manifested differently in individuals, and the sample size was not high enough. Further studies are required to prove the genetic links and, hopefully to find personalised and targeted treatments for depression, instead of prescribing random mood drugs 5.

Out of the manifold genetic links discovered, one of them is the 5-HTT/SLC6A4 gene. This gene, expressed exclusively by the neurons, produce the ‘serotonin transporter’. Serotonin, the ‘happy hormone’ 6, is responsible for the regulation of our anxiety, sleep, sexual drive, social behaviour etc; it is basically our mood regulator. So, 5-HTT plays a crucial role in maintaining optimum levels of serotonin in our neural synapses. Humans have two copies of this gene and each copy is called an allele. These 5-HTT alleles can be short (S) or long (L); the S form has a 44 base pair deletion that produces a less efficient serotonin transporter. Hence, we can have three different combinations (genotypes) for these genes: both short alleles (SS), a short and a long allele (SL), or both long alleles (LL). People with the SS genotype will have a less efficient serotonin transporter, and hence tend to become more depressed than people with the SL or LL genotype when in similar situations of stress 7 8.

A different set of researchers focus on the genes that regulate Dopamine (DA), which runs the ‘reward system’ of our body. One of the cardinal symptoms of depression is that our ‘reward system’ stops working properly, denying us the usual happiness we get by doing the things we love: we are unable to eat our favorite food or read our much loved book as we do not perceive any happiness in it. This is called anhedonia, and disturbances in the transmission of DA is responsible for it. Variations in the genes DR2 and DR4 have been found to be associated with the dysfunction of the reward system in MDD. These genes make two of the five types of dopamine receptors in the neurons, and each of these receptors works differently. There are two variations in DR2 that might cause individual symptoms of MDD. However, in DR4, present mostly in the amygdala and hippocampus, nine allelic variations have been reported to decrease the efficiency of dopamine receptor type 4, thereby leading to an inefficient reward system. There are also alterations in the genes responsible for the synthesis, degradation, reuptake etc of serotonin, dopamine, and other neurotransmitters that could contribute to MDD, and studies are still searching for a link 9. 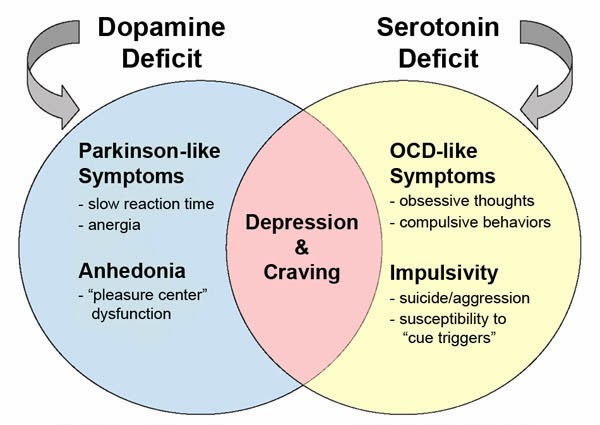 Various effects of the deficiency of Dopamine and Serotonin. Retrieved from: http://biologicalexceptions.blogspot.co.uk/2016/01/its-exercise-resolution.html

Interplay of the genes and life-events:

Fifty percent of depression is contributed to or caused by environmental factors such as stress and traumatic life events. A single life event happening later in life can lead to depression which is not chronic, and can be managed through counselling sessions. But what about traumatic events in childhood? Research has found that even a lack of affection from our mothers during childhood can cause a person to be easily depressed later in life. Something called epigenetics is responsible for this. Epigenetics is basically the chemical modifications to our DNA/genes; the addition of methyl or acetyl groups in DNA controls when and to what level a gene is to be expressed. It was found that, compared to individuals with a happy childhood, the glucocorticoid receptor (GR) gene of a person with a traumatic or affectionless childhood is hypermethylated, which means the excess of methyl groups in the genes decreases its expression. This leads to an abnormal stress response in the person, and they are easily depressed and have a heightened reaction to any kind of stress 10. Thus, counselling and managing this depression takes a lot of time and effort as it is partially imprinted on their genes due to their life events, but it is, nonetheless, reversible.

Depression is a serious condition, and cannot be taken lightly. More awareness is needed to help people understand and combat it. Even you, or your loved one, may be a victim of it and so it is necessary to understand that a person can neither just stop being depressed nor control when depression enters or exits their life. Nonetheless, there is hope that with the continued effort of the scientists involved and with more funding for new research, we will find the answer to depression and even more effective ways to treat it.

This article was specialist edited by Ellen O’Neill and copy edited by Andrew Denman.