It can be hard not to take coffee for granted these days. Most of us drink a mug first thing in the morning and continue throughout the day. At this time of year, as winter recedes and exams approach, many of us are rarely seen without one. Whether we drink it for taste, for warmth or for concentration, we rely on the stuff!

Your breakfast mug of Nescafé began life as the seeds of a coffea plant. These plants grow best in competitive, elevated tropical regions, and over time have evolved a highly specific mechanism of self-preservation. Young and vulnerable coffee seeds produce massive amounts of the endogenous neurotoxin caffeine in order to paralyse and kill insects that are looking for a quick buzz.

The two most important varieties of coffea seeds are coffea arabica (arabica coffees) and coffea caniphora robusta (robusta coffees). Arabica beans provide over three quarters of the world’s coffee. Arabica plants are significantly easier to grow and though they contain less caffeine than the Robusta variety, Arabica beans contain more fat and more sugar, which makes them tastier. Robusta, on the other hand has almost double the caffeine content, which gives it a very bitter, burnt taste. At the base of every coffee are about 50 beans, roasted and ground 1.

The fate of the coffea plant’s would-be predators may suggest that caffeine has the potential to harm, but fortunately for us, it would take roughly 70 cups of coffee to have similar effects on humans. 2 Caffeine is part of a chemical group called xanthines. Xanthines are produced naturally in the body, and have the ability to change the way in which some of the proteins in our bodies work, depending on their concentration. The main effect of xanthines is to block adenosine receptors. Adenosine is a protein found throughout the body which is responsible for some of the ‘downstream’ effects of the “fight or flight” hormone adrenaline. In the heart, adenosine can bind to receptors to slow your heart rate. In the brain, adenosine binding to other receptors can reduce the release of important neurotransmitters, reducing brain activity and slowing us down. On the other hand, when xanthines such as caffeine block adenosine receptors in these cell types, the opposite effect is observed, e.g. increasing heart rate and flooding the brain with the exciting and rewarding neurotransmitters glutamate and dopamine.

However, despite the beneficial few hours of heightened concentration, consumption of “the devil’s brew” has been extensively linked to almost every major disease known to man. Furthermore, large doses of caffeine can be fatal, causing cardiac arrest. At the same time there are claims that caffeine will reduce your risk of diabetes, stroke, dementia and cancer. Both sides of this heated argument have been considered extensively by policy makers around the world, most of whom have reached the conclusion that caffeine in moderation is okay and probably even helps protect against diabetes and some cancers. Moderation is defined as a maximum of 200 mg of caffeine in one sitting, and no more than 400 mg daily.

Back in 2011, the US company Dunkin’ Donuts performed a survey to assess which professions were most dependent on coffee 4, published in the Food and Function journal, compared the content and concentrations of caffeine and CQAs (a polyphenol also found in coffee) between a variety of coffee types and coffee shops in the West End of Glasgow, Italy and Spain. Espressos served in Spain contained the most caffeine, and those poured in Scotland contained the least. (A comparison of concentrations and content of Glaswegian coffee shops is shown in the picture below.) 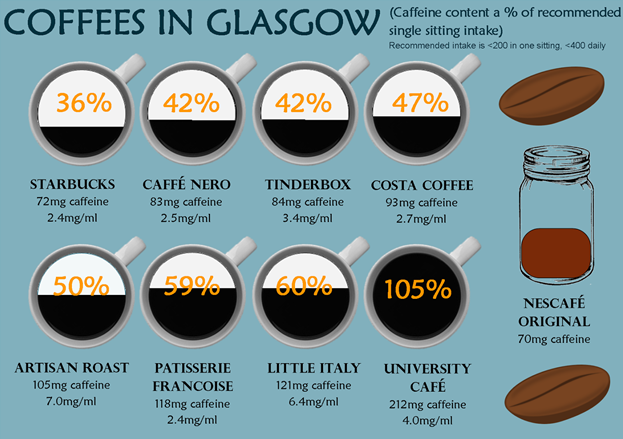 The researchers also compared the effects of both roasting the beans differently and using different barista techniques on the caffeine and CQA concentrations. Finally, they compared different types of commercially available instant coffee. Plain old Nescafé Classic contains more caffeine than more exotic alternatives such as Alta Rica or Gold Blend. This may be due to an increased Arabica to Robusta ratio in the more expensive, tastier coffees.

The take-home message from the study is that the caffeine concentrations and content of coffees vary hugely between countries, coffee houses and even baristas. These variations mean that it would be remarkably easy for those who frequent coffee shops to unwittingly consume more caffeine than their recommended daily allowance. Whilst we may rely on it, we need to be wary of our caffeine intake, and remember that caffeine can be found in other products besides coffee (for example, in teas, energy drinks and chocolate). However, as exams loom, there is a more practical message to be taken from this study: the next time you need that concentration boost, the West End’s best buzz-for-buck is to be found in the University Café on Byres Road!

This article was specialist edited by Debbie Nicol  and copy edited by Manda Rasa Tamosauskaite.

John is a medical student at the University of Glasgow. As a child, he dreamed of a career as an astronaut, but is now writing science articles and eating milky ways. Close enough.