The United Kingdom is Getting Greener

The United Nations Climate Change Conference (COP21) at the beginning of December 2015, was celebrated as equally as it was criticised. Either way, COP21 will forever be a landmark of international co-operation to tackle climate change. Many politicians praised it as a significant step towards preventing Earth from warming beyond the 2oC threshold. However, many scientists and environmentalists claim that these policies aren’t sufficient, criticising COP21 for producing voluntary emissions targets, rather than legally binding agreements 1.

One particular positive that came out of COP21 was that developed nations of the UN agreed to provide financial aid to developing countries to help move their economies from being dependent on fossil fuels to focusing on renewable energy. However, the developing nations believe that to secure short-term growth they must resist the switch to greener energy and continue burning fossil fuels 2. This is problematic as these nations tend to be the most at risk from climate change. Nobody likes a hypocrite, so is the United Kingdom setting an example for the more reluctant, developing nations?

To record emissions, a myriad of different greenhouse gases (GHGs) are measured. Carbon dioxide (CO2) is the most notorious GHG, and a model of which to compare the harmfulness of other gases. In comparison to CO2, methane is 25 times more efficient at trapping energy (heat) and sulphur hexafluorides (SFs) are approximately 22,800 times more efficient. The following is a list of GHGs from the least energy absorbing to the most: carbon dioxide, methane (CH4), nitrogen oxide (N2O), hydrofluorocarbons (HFCs), perfluorocarbons (PFCs) and SFs. With the exception of HFCs, emissions of the listed greenhouse gases have decreased in the UK because of European Union regulations 3. 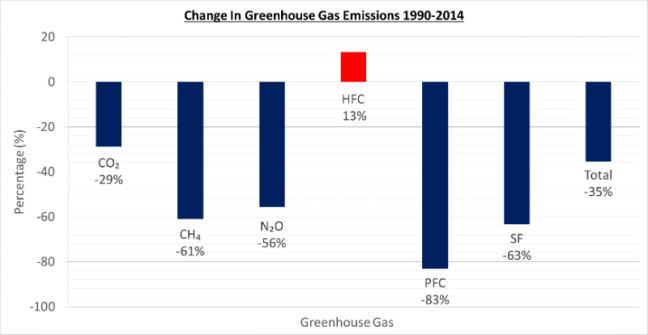 As a member of the EU, the UK is required to legally abide by four climate change targets. The first target, set from 2008-2012, has been achieved and from analysis of recently published data, the UK have already surpassed the EU’s second target by around 6%4.

To achieve all this the UK has had to cut emissions in some key sectors. The energy sector GHG emissions have dropped by 41% in 24 years. This is mainly due to large investments in renewable energy sources and co-operation with the EU 6. Progress is good within this sector considering it produces a high demand product and is by far the largest polluter. However, the transport sector hasn’t performed nearly as well. Its emissions only dropped by 3.3% within the same period. This small reduction is partly due to the 37% rise in licensed cars in the UK since 1990 7 and a reluctance to change to low carbon forms of transport. People’s desire to be able to travel anywhere at any time is now ingrained and habitual in everyday life. Transport will continue to be a problem area for reaching UK emissions targets until there is some revolution in technology or a shifting in the public’s  attitude.

Agriculture is another major source of GHG emissions. Although we don’t all hop into our tractors every day, we indirectly participate in the production of these emissions through our food choices. The production of animal products releases large quantities of GHGs making agriculture the third biggest GHG emitter, creating 14% of global emissions 8.  However, the UK predominantly relies on food imports so agriculture is a relatively low source of GHGs here 9. This makes the UK look greener “on paper”, but in reality GHG emissions are being outsourced to other countries. British agriculture only produces 9.6% of the total GHG, but it produces 51.4% of the methane and 74.5% of all N2O emissions, and these gases are 25 and 298 times more effective in warming the atmosphere than CO2, respectively. On the surface, agriculture is a relatively small emitter of total GHG, but it is certainly an area where the UK could look to improve its emission outputs.

Refrigeration and air-conditioning both produce small but significant quantities of the most effective group of GHGs. HFCs, PFCs and SFs are fluorinated gases which are incredibly efficient at absorbing heat – making them great for refrigeration but not so great for the planet. Before the 1990s, these compounds weren’t in abundance and similar compounds called chlorofluorocarbons (CFCs) were used. These were later banned by the UN due to evidence finding they were depleting the ozone layer 10. CFCs were then replaced with other supposedly “less harmful” gases – HFC, PFC and SF. These, plus a rising demand for temperature control, are responsible for a sudden increase in fluorinated gas production. These gases exist in relatively small volumes, but they trap a large amount of energy compared to other GHGs. Responsible and careful disposal or recycling of appliances that contain these gases is key to preventing their future release. Advancements in technology now allow fluorinated gas-emitting industries to convert or destroy them, with this becoming an increasingly common strategy for their disposal.

Amongst the “doom and gloom”, the UK has done remarkably well to reduce its GHG emissions thanks to reductions in key sectors and regulations imposed by the EU. Several industries have lagged behind due to reluctance and technological limitations. Our methods of transportation, industrial livestock farming and refrigeration have all become part of daily life, making them hard to change. Change, such as moving to greener sources of energy, is being made but it is only going to get harder from here. If we are to continue the same rate of reduction in emissions as we have so far, then we will need to take more drastic and widespread steps. But, environmentally speaking, the UK now has some serious bragging rights.

This article was specialist edited by Kieran Tierney and copy edited by Jessica Bownes.