The rise of Artemisinin: the malaria wonder-drug

The Who, Why, Where, and When1

Let me set the scene: we’re in late 1960s China, and a cultural revolution is underway, causing unrest to spread throughout the country. Chairman Mao Zedung is struggling to control the murdering malaria spreading like wildfire throughout his troops fighting in the southwestern Chinese jungles. He must stop this disease from wiping out his whole army. So on 23rd May 1967, Chairman Mao orders the setup of Project 523, the elusive drug discovery project so secretive that if I told you about it, I’d have to kill you.

What I can tell you (without killing you, I mean) is on 21st January 1969, a bright, dedicated scientist is recruited as head of Project 5232. Her name: Youyou Tu. Her mission: find the cure for malaria.

Tu turned to ancient herbal medicine books and experimented with hundreds of different recipes in her search for a malaria cure, one of which was the sweet wormwood plant (Artemisia annua) that would become the wonder-drug artemisinin. Yet none of her experiments resulted in an effective anti-malarial treatment.

It was while reading ancient Chinese pharmacologist Ge Hong’s 1700 year old “Manual of Clinical Practice and Emergency Remedies” that Tu made a breakthrough: she discovered that her method of extracting the active ingredient qinghaosu, now better known as artemisinin, from the sweet wormwood plant was actually destroying its anti-malarial properties. The heat Tu used to prepare the extract denatured the compound, so Tu altered her method and used a cold solvent instead.

This revised extract proved to be 100% effective in treating malaria-infected mice and monkeys; it became a pioneer in a new class of antimalarial drugs that reduced the number of Plasmodium (malaria-causing) parasites within the host quickly and effectively.

The discovery of artemisinin came at the right time, as old malaria drugs like chloroquine were beginning to lose their effectiveness as chloroquine-resistant strains of malaria began to evolve.

In order to proceed with the drug development, Tu and her team made the brave but risky decision to test artemisinin on themselves – in 1960s China, human clinical trials did not exist. The tests were fruitful, proving the potency and non-toxicity of the drug. Further studies were undertaken on malaria patients in the Hainan province which confirmed that artemisinin really did work.

Tu’s work on artemisinin has only in recent years brought her worldwide recognition. She was awarded the 2015 joint Nobel Prize in medicine3 and the 2011 Lasker Award in clinical medicine, an extraordinary feat for someone with no post-graduate qualifications (none were available in China at the time). Despite this, Tu explained that she wasn’t motivated by fame and recognition but instead only wanted to give back to China for providing her with an education4. 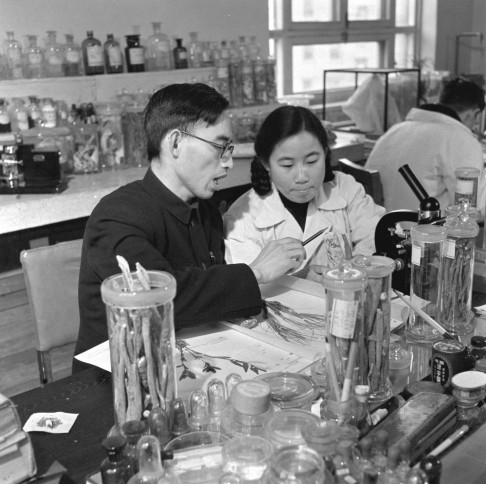 Learning from the master: Tu Youyou and her tutor Lou Zhicen working in the lab in 1951. Image via wikimedia commons.

So how does artemisinin actually work? Nobody seems to have a definitive answer to this question but of course, there are theories. The protozoan (unicellular eukaryotes) parasites that cause malaria are from the Plasmodium genus, of which 4 species are known to cause malaria in humans: Plasmodium falciparum is the deadliest.

The female Anopheles mosquito is the vector for the malaria disease. After she bites an infected human, the Plasmodium parasite matures inside her. When she bites and drinks blood from a healthy human, she injects the parasite while it is in the sporozoite stage. These sporozoites then infect the human liver, where they mature into schizonts; it’s the schizonts that then contaminate the blood. One popular theory suggests that it is at this stage that artemisinin shows the malaria who’s the boss.

Schizonts contain an insoluble iron compound, called hemozoin, which reacts with the peroxide group in artemisinin; this is thought to lead to the release of radicals which seek, attack and destroy the Plasmodium parasites, all the while shouting TERMINATE in a Dalek voice… It’s still unclear if that’s the mechanism artemisinin actually follows, but it’s a strong theory5.

Furthermore, although a consensus hasn’t been reached, the majority of studies have suggested that the early intra erythrocytic ring stage in a plasmodium parasite’s life cycle is most sensitive to artemisinin, supporting the theory above. More excitingly, studies have shown that artemisinin also effectively destroys the parasite’s gametocytes – the only transmission-competent cells that are made within the host. These cells don’t contribute to the disease pathology but killing them ultimately prevents malaria transmission nonetheless.

Artemisinin has very few side effects and is highly effective in treating malaria: the World Health Organisation (WHO) reported that since 2000, the global rate of deaths due to malaria has decreased by 60%6. Unfortunately, the chances of malarial relapse remain quite high. For this reason, the WHO recommends artemisinin-based combination therapies (ACTs), rather than just artemisinin alone. Indeed, in 2013, 392 million ACT courses were administered globally. 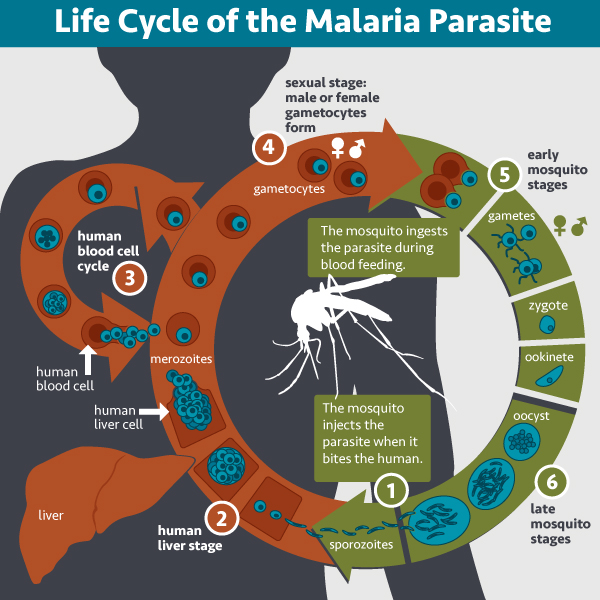 Round and round: the lifecycle of the malaria parasite. Image by NIAID via flickr (CC BY 2.0)

All good things come with a catch

Youyou Tu wholly deserves to be recognised and rewarded for her ground-breaking research: Artemisinin has revolutionised malaria treatments, and saved millions of lives. But, as with its predecessor chloroquine, the malaria disease is beginning to get savvy to its killer drug.

The growing number of artemisinin-resistant malaria strains seems to be a result of patients either taking sub-optimal doses of the drug, as bought on the black market, or taking the drug incorrectly. With no registered vaccine for human malaria, and no alternative treatment as of yet, more efforts are being made to inhibit malaria at the source, before humans become infected.

Is there a light at the end of the tunnel? Perhaps – but action needs to be taken now to prevent the disease spiralling out of control.

This article was specialist edited by Becca Lee and copy edited by Sarah Spence.

Katherine is an undergraduate student studying Chemistry with Drug Discovery at the University of Strathclyde. She loves sports, but also enjoys curling up with a good book and her dog by her side.