Skittles™ brand their product “taste the rainbow,” but have you ever wondered what a rainbow tastes like? When imagining it inside your head, you might think that red would taste like strawberry, orange would taste like, well, orange, and yellow like lemon, and so on. It is hard for us to deviate from this idea, because of the excellent marketing of Skittles™, Starbursts™ and other manufacturers; but what does the rainbow actually taste like? One way to find out would be to ask a synaesthete.

Synaesthesia is the blending of two typically separate senses, which enables a synaesthete to experience more than one sensory sensation 1 from each sensory input. One example, which the title alludes to, is being able to associate specific colours with specific tastes. In my own case, synaesthesia manifests as seeing colours and shapes when I hear a sound. I did not realise I was a synaesthete until a few months ago, when I took part in an auditory perception functional magnetic resonance imaging scan – all I had to do was sit in the scanner and listen to various noises and voices. My data came back and it turned out I had been excluded from the study, because the auditory part of my brain wasn’t being activated when I listened to the stimuli. Instead, my vision area was having a party – showing lots of activation! I didn’t think I had synaesthesia until I took part in a second study, which showed equally bizarre results! I then went to talk to a synaesthesia researcher in the department, who explained that it sounded like I have a very neural-based synaesthesia, and that my colour experiences to sound stimuli is a form of ‘projector’ synaesthesia – the least common of the two main forms of synaesthesia, which I will go on to mention. I reflected that I had always had ‘after-image experiences’ and saw colours, but never connected it to noise before. As is typical for synaesthetes, I thought that what I experienced was no different to anyone else, but apparently, this is not the case!

For some synaesthetes, synaesthesia can become quite personal – colours that do not taste nice, sounds that do not feel good, or even letters with bad personalities, might be avoided. When synaesthesia runs in families, as it can do, there can be arguments over what ‘colour’ a noise is, for example. 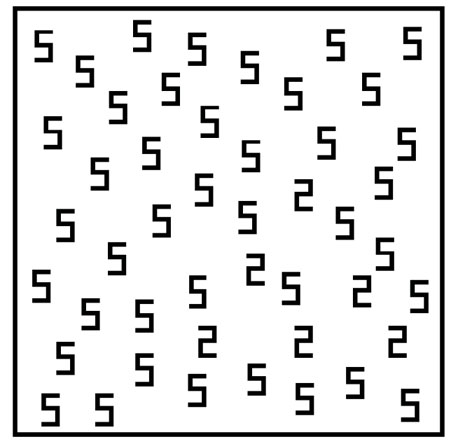 How long did it take you? Be honest. The number ‘2’ is quite similarly shaped to the number ‘5’, it has almost the same pattern and collection of curved and straight lines, just reversed. However, it you had grapheme-synaesthesia, the number ‘2’ would immediately stand out because it would be in colour. If you look closely, the ‘2’s actually form a triangle, which would have been immediately obvious to a grapheme-synaesthete, as they would see it in a particular colour.

It was previously thought that females were more affected than males, but with the rise of objective tests of synaesthesia, it is now thought that self-report gender divisions were caused by females being more likely to disclose their conditions 5. There are a number of theories about what causes synaesthesia. Most of the research in synaesthesia has looked at grapheme-synaesthesia, since this is the most common type.

One study looked at 11 grapheme-synaesthetes, and found that the colours that they experienced from text were the same colours and text in toys from their childhood. Many games and toys used for learning language, numbers and time all have colourful displays of numbers, letters, and words, and these synaesthetes’ experiences (i.e. A = red) were what they had been exposed to as a child. In this particular case, their favourite book for learning letters used the colour red for ‘A’ 6. This has led some people to believe that synaesthesia results from exaggerated memories, particularly from childhood 7. Whilst the memory theory might explain some cases of grapheme-synaesthesia, it certainly does not explain every individual’s case and cannot explain other types of synaesthesia, such as taste and noise experiences. 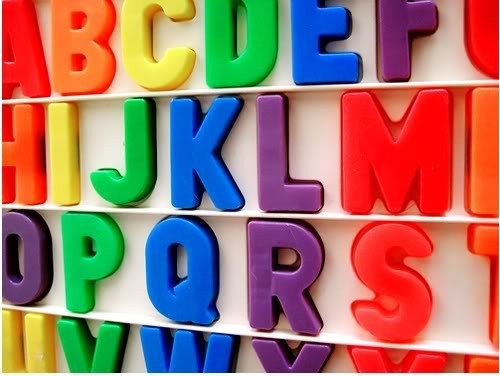 Cognitive neuroscience literature has sought to understand synaesthesia in terms of the ‘pathways’ in the brain. Typically, it is thought that we have a ‘visual pathway,’ an ‘auditory pathway,’ and a separate pathway for all other senses, that leads to a part of the brain where this information is collated to form one perception. The visual pathway and the auditory pathway meet together so we can process the voice (audio) coming from someone’s face (visual). Our main sensory pathways, whilst they have many interconnections, are generally thought of as separated. But in synaesthesia, it is thought that these pathways are not so independent, and this is why there is a ‘double perception’ to certain sensory stimuli (colours, letters, noises, etc.).

Synaesthesia might occur through ‘cross-tied sensory pathways’ in the brain, but as keen scientists, we want to try to explain why this happens. During development, the brain trims the unused or irrelevant neuron connections. A particularly large ‘synapse pruning,’ as this is called, happens when we are around two years old 8. In individuals with synaesthesia, theories suggest this pattern of pruning might not happen in the same manner. Potentially, there is a genetic component to this development, and synaesthesia often runs in families. So if synaesthesia generally results from over-developed pathways that we may all have or had at one point, does this mean we may all be capable of experiencing synaesthesia?
There is a very common association that red sweets have a strawberry flavour, and orange sweets have an orange flavour, etc. Also, many people associate red with warmth, blue with cold; red with danger and green with safety. These associations are tied to our experience, but why do they work so universally? Does it indicate that synaesthesia is possible in non-synaesthetes?

Researchers tested this hypothesis by hypnotising normal, non-synaesthetes, to induce colour-grapheme associations (i.e. the number 1 is always red, the number 2 is always blue, etc.). The participants then were asked to state what (plain black text) number came up on a (brightly coloured) screen. Those who had hypnosis-induced synaesthesia were unable to see the number on the screen when its associated colour was the same as a background screen, even though the number was explicitly displayed in plain black text. This indicated that experiences of colour-grapheme synaesthesia could be induced by the hypnosis 9. Since the tests ran after only an hour of hypnosis, it is unlikely that new pathways had been formed between the area of the brain processing text and colour. Instead, it suggests that the pathways were dormant in the non-synaesthetes, and activated after hypnosis 10.

The precise prevalence of synaesthesia is difficult to guess, since it is likely that many people are unaware that they have synaesthesia. This is because synaesthesia, usually, is something that you are born with – and a synaesthete might not realise that their perception is different from anyone else’s.

Synaesthesia is a perplexing condition that is still producing interesting investigations and results in the cognitive neuroscience community. Hopefully, if this research continues, we may be able to shed some light onto why some people “taste the rainbow”, and others don’t. Does your colour red taste like the sweet strawberry flavour of Starbursts, or is your experience of cross-sensory association against the grain of product marketing?

Do you think you might have synaesthesia? Check out here and here for more information.

This article was specialist edited by Laura Kane and copy edited by Rebecca Baird and Michaela Mrschtik.

Margaret Laurie is a Psychology student at the University of Glasgow with a keen interest in neuroscience and atypical psychology.