The Evolution of Nanotechnology

In 1959, Nobel Prize winning physicist Professor Richard Feynman gave a lecture titled “There’s Plenty of Room at the Bottom” 1. In this lecture he outlined the possibility for a new scientific field, which we have come to know as “nanotechnology”. Nanotechnology is a catch-all term that describes any material or device – be it electrical, medical, magical – that has at least one dimension on the nanoscale i.e. between 1-100 nm, a similar size difference to that of a centimetre and a metre – only 10 million times smaller. Nanodevices can be as much as one million times smaller than a single grain of sand; these tiny dimensions become even more mind-boggling when you consider the fact that this is equivalent to the size difference between that same grain of sand and the Golden Gate Bridge in San Francisco.

Feynman’s lecture is widely believed to have kick-started the entire field, however this is not quite true: It actually went mostly unnoticed by the science community until the 1990s when research into nanotechnology was already well underway. Despite this, Feynman is still known as the ‘Spiritual Grandfather’ of nanotechnology and, in that lecture, he had some interesting insights into what was to come. 2

In the 1950s computers needed a good few square metres of space and had internal memories of only a couple of megabytes at most. This is equivalent to a computer taking up your entire living room (or, if you’re a student, possibly your entire flat) but only being able to store one song on it. Comparing this to nowadays, when it is possible to carry your entire music collection in your pocket, you can see that technology has advanced immensely. This is due to the decrease in size of transistors– the main components of computer chips, with over one billion of them now being packed onto chips that can be smaller than a fingernail 3. Since 1971, they have decreased from 0.00001m to 0.000000014m 4. This may not look like a big decrease but it is actually about 1000X smaller, similar to the size difference between a human and a midge. Improvements in nanofabrication processes are to thank for these tiny transistors, allowing smaller computers to be made with larger memories. 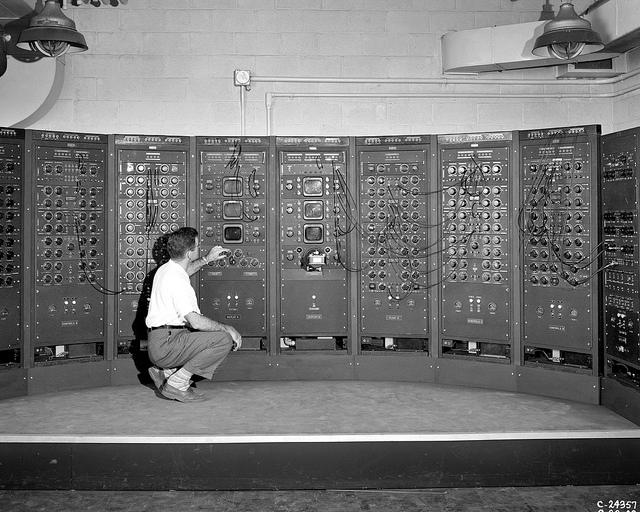 An early Computer, in the days before semiconductors.
Credit: James Vaughan

Richard Feynman talked about the need for decreasing the size of computers and increasing memory in his lecture, although this was before transistors were used in computers. He also mentioned new applications that he thought would be possible with more advanced computers, including facial recognition which is commonplace today, saying “There is no machine which, with that speed, can take a picture of a face and say even that it is a man; and much less that it is the same man that you showed it before.” He goes on to say that if applications like this were to be achieved with the technology of the time, the computer would have to be as big as the Pentagon; that’s a little bit bigger than your average smart phone!

Another question that Feynman asked in his lecture was whether it was possible to write all 24 volumes of the Encyclopaedia Britannica on the head of a pin; it turns out it is. Feynman calculated that by decreasing the size of the writing 25,000 times it is physically possible to fit the entire encyclopaedia onto an area of about 1.6mm. This hasn’t actually been done but other works have been shown to fit on to tiny spaces. Here at Glasgow University, Dr Stephen Thoms managed a rather patriotic feat by writing the entire works of Robert Burns so small that more than ten of them could fit on the head of a pin 5.

Feynman even described possible tools that could be used to achieve this and these descriptions sound very similar to some of the techniques that are in use today. One of his ideas is to use electrons, focusing them with lenses to form an intense beam that is capable of marking a material. He suggested marking the metal directly initially but goes on to say “If it doesn’t work for a metal surface, it must be possible to find some surface with which to coat the original pin so that, where the electrons bombard, a change is made which we could recognize later”. In fact, this is basically how electron-beam lithography works, a tool commonly used for nanofabrication; the metal is coated with a material called a resist whose chemistry changes when electrons hit it, causing it to either weaken or harden. The weaker part can then be removed using an acid, leaving the rest behind as a protective layer over certain parts of the metal. This means that parts of the metal can be removed but those bits covered with resist won’t be, allowing tiny patterns, such as letters, to be made in the metal. Electron-beam lithography can create features smaller than 10 nm in size so it’s a pretty important tool for nanofabrication and is how Dr Thoms ‘wrote’ the works of Burns on such a tiny space.

Nanotechnology has a lot of applications in biology and medicine but most of these are still in their infancy. Feynman, again, predicted some of the biological applications that are currently being researched; He talked about a “mechanical surgeon” that could be injected into blood vessels to look at the heart and use nano-sized tools to fix whatever’s wrong. Having one device that is capable of doing all of that is a very long way off but a lot of different types of nanodevices that can be injected into the body are in development.

A lot of research in nanotechnology is geared towards non-invasive treatments for cancer. For example, carbon nanotubes are being researched for photothermal therapy. A nanotube is basically a single sheet of carbon atoms that has been rolled into a very small tube. With small modifications, these could be injected into the body where they would preferentially bind at tumour sites due to particular molecules that have been attached to the surface of the nanotubes. When they are inside the tumour, a low energy laser is fired at the affected area. The carbon nanotubes absorb a lot more of this energy than other materials in the body and therefore heat up a lot more quickly than the surrounding tissue and this heat causes the tumour to start dying from within 6. The main advantage of this technique is that it only kills tumour cells, thus getting rid of the side effects associated with current treatments such as chemotherapy.

Also under investigation are nanomotors, which could have additional devices attached for diagnostics and treatments. These look nothing like full size mechanical motors as they are much less complex devices with only one or two components, and can be manually manoeuvred from outside the body if required, using magnetic fields or pulses of ultrasound, for example 7. One particular nanomotor design (that has quite possibly the best name I’ve ever heard) is ‘Acoustically Propelled Microbullets’. These are tiny little conical shaped structures that carry their own fuel source. When one of these ‘microbullets’ is hit with a pulse of ultrasound the fuel inside it explodes causing it to propel forwards with a velocity high enough to tear through flesh and tissue 8. These could make it possible for nanosurgery to become a reality, however, these technologies are still at a very early stage of development and would have to be controlled very precisely if they were ever to be let loose inside the body.

These devices may not quite live up to Feynman’s ‘mechanical surgeon’ but they are still leaps and bounds ahead of medicine in the 1950s. In the future, who knows what will happen? Maybe we’ll all have tiny surgeons inside us that will fix problems before we even know we’re sick.

These are just a few of the many ideas Feynman had about nanotechnology with him going on to give further lectures on the subject during his career. Unfortunately he died in 1988 and so didn’t live long enough to see many of his more outlandish ideas come to fruition. However, he did witness the miniaturisation of computers as well as the development of several tools that are now commonplace in nanotech labs around the world. He even lived to see nanotechnology researchers win the Nobel Prize in Physics. 9 Feynman’s ideas may have been ahead of their time but, considering the many applications that are now utilizing nanotechnology, it is plain to see that he was right: There really is “plenty of room at the bottom”.

Jennifer Hamilton is studying towards a masters in Nanoscience and Nanotechnology at the University of Glasgow.