Rapid technological advances within the past decade now allow the isolation and analysis of individual tumour cells circulating in the blood stream of cancer patients. We are beginning to realise the potential of these cells, which carry the hallmarks of the patient’s tumour, in developing personalised treatments with the possibility of avoiding invasive biopsies.

Tumours are complex, and can contain millions of cancerous cells. Cancerous cells are formed when mutations occur in the DNA of healthy cells in tissue. These mutations, which often differ among patients, lead to the cells being able to grow rapidly, ignoring programmed death signals. This allows the newly-transformed cancerous cells to clump together into a dense mass and survive on low levels of oxygen.

Following these early events in the progression of cancer, many tumours will begin to spontaneously spread around the body using the bloodstream as a highway. Around 14 tumour cells can be found in each millilitre of blood 1. However, they are vastly outnumbered by millions of red blood cells contained in the same volume. Only 0.01% of circulating tumour cells (CTCs) will go on to form secondary tumours in the organs along this highway 2. As these circulating tumour cells act as seeds from the patient’s tumour, scientists are trying to understand whether they contain the same genetic abnormalities as the patients tumour. CTCs could potentially provide important information about the unique mutations driving the patient’s tumour, allowing doctors to select the best treatment for that patient’s cancer. 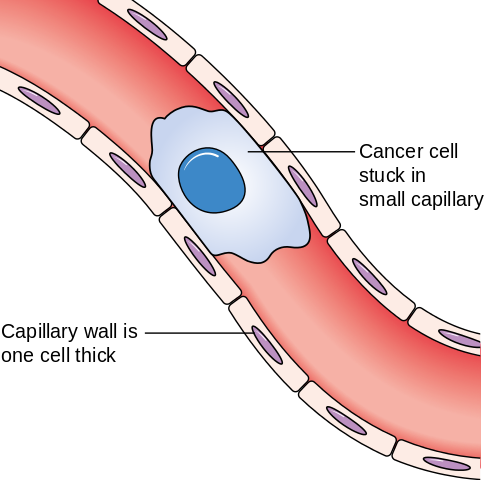 When circulating tumour cells get stuck in the blood vessels, they can exit the vessel into the surrounding tissue, forming a secondary tumour. Image credit: Cancer Research UK via Wikimedia Commons (License)

One of the most recent techniques developed to isolate CTCs is called CellSearch. This method enriches CTCs from the patient’s blood using unique markers on the surface of the tumour cells. Scientists like Fernandez and colleagues at the Thomas Jefferson University in Philadelphia used this method to isolate CTCs from the blood of patients with a particular subset of breast cancer [lref id=1]. After isolation, they analysed the DNA mutations in single CTCs and compared them with the mutations found in the patient’s tumour.

The original tumours of patients involved in the study had mutations in the TP53 gene, a gene which is important in preventing cells from becoming cancerous. They discovered that some of the CTCs isolated contained the same mutation in TP53, meaning that these cells could provide a method of discovering the mutations that have lead to the patient’s cancer. This would be very useful as currently the best way to gain information on the tumour is to perform an invasive biopsy. Blood can also be taken at multiple stages from the patient, providing information about the progression of the patient’s tumour. However, some CTCs harboured different mutations to the original tumour, highlighting our need to understand the connections between these cells and the tumour. If we can understand these connections, these cells may help us understand the fundamental mutations in a patient’s tumour, allowing us to select the best course of treatment for the patient, and even get an idea of how the tumour may develop in the future.

Emma Woodham is a PhD Student at the Beatson Institute for Cancer Research, working to understand how cancer cells move.