Finding the Origins of Life in Space

ALMA on a starry night in the Chilean Andes. European Southern Observatory and Tafreshi B. via Flickr ( License

Researchers at the Max Planck Institute for Radio Astronomy, the University of Cologne and Cornell University, have recently discovered a molecule with an important structure. By analysing light from space using spectroscopy with a radio telescope array, isopropyl cyanide was identified within the star forming region Sagittarius B2. With a similar structure of carbons as amino acids, astronomers now believe that these building blocks of life could also be found in space.

Astronomers use spectroscopy as a way to identify the chemical compositions of celestial objects by analysing the light radiated by those objects. A black body is a hot dense object that emits a complete spectrum of electromagnetic radiation, including a rainbow of visible light. The spectra observed from celestial objects, however, is not continuous. They have dark gaps in their spectra, known as spectral lines, that can be analysed to find the atoms and molecules that make up the object as well as their abundance, temperature, pressure and magnetic field.

A hot tenuous gas gives an emission line spectrum, where an electron drops from a higher energy state to a lower one, with the energy being released as a photon of a specific frequency. Because there are fixed orbits and energy levels for electrons within an atom, only certain frequencies of light equivalent to these energies can be emitted. Emission spectra look like a horizontal black bar with thin vertical lines of varying colour and thickness corresponding to the emitted photons, the inverse of absorption spectra.

This latest discovery was found using ALMA – the Atacama Large Millimeter/ submillimeter Array. It consists of a total of 66 antennae spread up to 16 kilometres, where 54 antennae have a diameter of 12m and the other 12 are 7m across, looking more like very large satellite dishes than a tradition telescope 1. The combination of the antennae in an array creates an interferometer. The total resolution of an interferometer is equivalent to a telescope with a diameter equal to the largest separation of antennae. This gives sensitive and powerful telescope without all the limitations of a single large diameter telescope. The array is designed to measure wavelengths of light in the area between infrared and radio waves. It is expected to detect waves from objects in space such as the formation of stars from dust clouds, galaxies, and even remnants of the Big Bang.

Its location in the Atacama Desert in Chile was carefully chosen to be away from the most populated areas so as to reduce interference from man-made television and radio waves. Specifically, the millimetre and submillimetre wavelengths used by ALMA are also absorbed by moisture in the Earth’s atmosphere, so building it in a dry desert 5000m above sea level minimises this.

The interstellar medium can be thought of as occupying the areas in space far away from the influences of stars. It can vary drastically from one region to another and is made of gas and dust. Light is scattered and absorbed by these dust grains, reducing the apparent brightness of stars seen through the medium. The absorbed light is reemitted in microwave and infrared wavelengths, making it observable to ALMA. The interstellar material is concentrated into the disc of our galaxy, containing about 10% of the mass of the Milky Way. The more complex molecules found in the interstellar medium tend to form cool, more dense regions called molecular clouds, between 4 and 8 kiloparsecs (13,000 to 26,000 light years) from the centre of the Galaxy 2.

Reactions take place within the molecular clouds such that radicals, ions (produced by cosmic rays) and molecules are formed. The density is still low so reactions are unlikely to take place with more than two particles at a time. There are various possible routes for molecules, e.g. water and silicates, to form under these conditions. 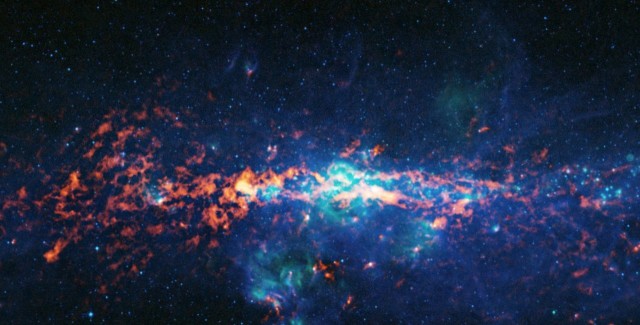 Colour composite image of the Galactic Centre and Sagittarius B2. Bo Stern via Flickr ( License )

One molecular cloud of interest is Sagittarius B2, one of the largest molecular clouds and star forming regions in the Milky Way. This is where the recent discovery of isopropyl cyanide was found to be. Isopropyl cyanide is the first organic molecule to be found in interstellar space that does not have a straight chain of carbon atoms. It has the same chemical formula as the normal straight chain molecule, C3H7CN, but instead of the CN group being on one end of the chain, it is bonded to the middle carbon. Since a structure like this had never been observed in interstellar space before, it was assumed that the conditions made it impossible for branched structures to form. Perhaps most surprising is that it was found to have very similar abundances to that of the normal straight chain propyl cyanide molecule.

The researchers were able to discover this molecule and so prove that branched chain structures are able to be formed in space. Amino acids, which have a similar branched structure to isopropyl cyanide, have previously been discovered in meteorites but there has been uncertainty over how and where these could form.

Proteins are made up of long chains of amino acids, and so amino acids are essential for life on Earth. Amino acids also store and transport certain nutrients and help heal wounds. The discovery that branched carbon structures are able to form in interstellar space strongly supports the idea that amino acids can also form. This means that it likely at least this one biological essential for life as we know it could be found spread out through the Milky Way, and the possibility for life elsewhere in the Universe has increased, even if only slightly.