Usually if a building needs to withstand an earthquake, architects and engineers find ways to safely absorb its energy, for example, by building shock absorbers into the foundations. However, scientists at the Institut Fresnel are investigating a new technology which could, in certain circumstances, prove to be a superior option when dealing with the problems posed by earthquakes: seismic invisibility cloaks.

The first invisibility cloak for light was built in 2006* using “metamaterials” 1. Metamaterials are devices that interact with energy in unusual ways. If they are to interact with light energy they must be very small, smaller than the light’s wavelength (for example, the wavelength of visible light is ~1/50th the thickness of a human hair). Things that small are kind of tricky to fabricate.

However, earthquakes, like light, also transfer energy and also take the form of waves. Wavelengths of earthquakes are varied but much greater than wavelengths of light. Therefore, it’s significantly easier to build metamaterials for earthquakes. In fact, it turns out to be surprisingly simple. 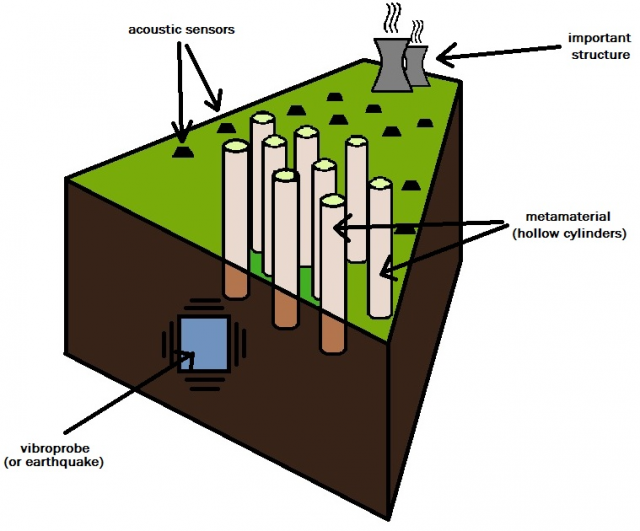 Figure 1: The author’s attempt at an illustrative diagram. The vibroprobe shakes the ground – simulating an earthquake. Rows of hollow cylinders act as metamaterials, reflecting the vibrations away from the important structure, making it “invisible” to the “earthquake”. Acoustic sensors measure how well this works.

An experiment, inspired by computer simulations, was composed of a vibroprobe (a machine that simulates earthquakes), an array of uniform, hollow cylinders inserted into the earth and an array of acoustic sensors to pick up the vibrations. The researchers found that after the first row of cylinders the vibrations were greatly reduced. After the second row they were almost undetectable.

So if you surround a building with rows of boreholes an earthquake’s vibrations shouldn’t reach it and it will survive. Great news! There are some drawbacks, though. Any earthquake energy that isn’t absorbed is reflected. Fine for the structure you’re protecting but catastrophic for its neighbours. So this is recommended only for valuable, isolated structures like power stations.

The metamaterials work best if the earthquake’s frequency is known in advance, which it usually isn’t. Research is ongoing to learn more about protecting against earthquakes with frequencies which are particularly damaging to buildings.

*That’s right! We have an invisibility cloak now. However, it can only hold small objects and only works in microwave frequencies so the human eye can still detect the “hidden” item, but it’s a start. We’ll get better.