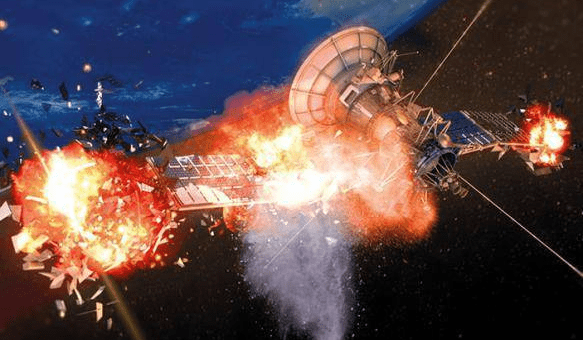 It has been observed that spending too much time on Twitter can lead even the most innocent user to overly dramatic behaviour. The hostility on the social media platform can seem infectious, influencing the unlikeliest of users. In September, the European Space Agency (ESA) decided to post a thread of passively aggressive tweets aimed at one of the world’s most prolific private space companies, Elon Musk’s SpaceX1.

The story, as told by ESA, was that a SpaceX satellite was on a collision course with one of their own spacecraft and SpaceX ignored their calls to move it out of the way. With little time to spare, ESA performed their own manoeuvre, boosting their satellite into a higher orbit and avoiding the risk of destroying both objects2.

SpaceX, who recently launched a ‘constellation’ of 60 satellites, claim they missed the warnings due to a communication error. Anyone with a car may have had the displeasure of encountering a stubborn driver who refuses to reverse after getting themselves into a standoff on a narrow road. For satellites moving at more than 20,000 miles per hour, this sort of behaviour can become a deadly game of chicken3.

With each orbit, satellites gravitate closer to Earth. Thus, long-term spacecrafts need propulsion that can keep them high enough to avoid burning up in the Earth’s atmosphere. As many of us know, fuel can be rather expensive. That price tag increases exponentially when the propellant has to be launched thousands of kilometres upwards on-board a spacecraft4. Thus, a satellite’s lifespan depends on the efficiency of its fuel expenditure, which can incentivise space companies to be stubborn about changing their craft’s trajectory.

With SpaceX planning to launch up to 12,000  internet-providing spacecrafts in the future5, this incident begs the question: who has the authority to dictate space traffic? The answer, as it stands, is up in the air.

In 2009, the USA’s Iridium 33 satellite collided with an inactive Russian orbiter, destroying both objects and creating thousands of flying fragments6. Events like this increase fears of “Kessler Syndrome”, wherein debris from collisions will inevitably collide with other objects, leading to huge growth of satellite destruction7.

The USA have regulations in place that encourage disposal of ‘dead’ satellites by letting them burn up in the atmosphere or sending them to a ‘graveyard orbit’ where they won’t get in the way of active spacecrafts. For newly space-faring nations, abiding by US regulations may feel far from compulsory. While important, American legislation only applies to spacecrafts launched from America8.

A new dawn of space activity has made the problem of ‘space junk’ more apparent than ever, with the USA and Japan agreeing to join forces in a bid to help clear up the mess. NASA provides a space debris tracking system, while Japan is  gathering the most dangerous debris using specially-designed spacecraft9.

There is no doubt that a global ‘space traffic control’ authority may be needed in the near future. With the blatant fallibility of human decision-making, it seems that new tracking technology will have a crucial role to play.

Michael Turner is a Physics and Astronomy undergraduate at the University of Glasgow. He is mostly interested in observational astronomy and space exploration.

I urge everyone from @UniStrathclyde to do this survey! If you or someone you know who has been harassed, bullied or been discriminated against! It's important for the University to know what actually goes on https://www.strathunion.com/ents/event/1187/

This, by @rooneyw1991 was picked up by @SPAJournalism for their most recent magazine 🤩

Originally published in our #ScienceIsForEveryone issue, check it out below 👇

Thanks to @emilyxarmstrong for editing. Artwork by Ryan Harley.

Check out my latest @GlasgowGist article about how we can die better! This was featured in our ‘Science is for Everyone’ Issue and the temptation to call it ‘Dying is for Everyone’ was overwhelming https://the-gist.org/2020/01/modern-medicine-and-successful-dying/