Behind Birdsong: Environment’s Influence on Language 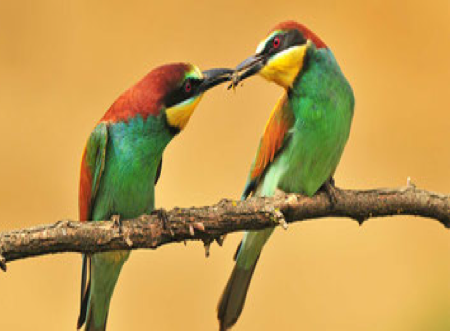 It’s deep in the night: a myriad of calls echo through the rainforest. A tropical bird tries to communicate with a mate far into the overgrowth. How can it hope to distinguish itself from the discordance of the other calls?

This issue – the ability to communicate with each other efficiently – is highly important to a variety of creatures. Insects, for example, can communicate by depositing chemical signals on the ground for the receiving insect to later detect. Moreover, some species that inhabit arid climates use chemicals that are more resistant to evaporation than their temperate cousins, thus increasing their signal’s efficacy. Additionally, to communicate better, some nocturnal fish don’t overlap their acoustic signals to each other. Doing so prevents a confusion of signals – comparable to being talked over when speaking on the phone. Improving the clarity of these signals is imperative at night, as there are fewer visual cues to support communication than during the day. This subtle difference between day- and night-active fish highlights how the environment actively pressures nature into adapting to a more suitable form of communication.

Acknowledging that animal communication can be directly influenced by the environment is one thing, but can the same be said for human language? Recent research has shown potential; however, some researchers are reluctant to investigate further. Such reluctance stems from the presumption amongst linguists that language is excluded from environmental influence. This mindset, however, is beginning to change1.

Returning to the plight of the tropical bird. In the rainforest environment, reverberation is rife and the humidity is high – acoustics are easily obscured. The thrush-like antpitta (a bird that inhabits the ground level of the rainforest) has a song of a low-frequency2 3; low-pitch booming travels easier in such a location, facilitating the bird to communicate more effectively. On a related note, consonant sounds are relatively high-frequency compared to vowel sounds, which led Tecumseh Fitch – a linguist in Vienna – to notice a potential environmental influence on human language. He found many languages spoken in these areas don’t use consonants extensively, perhaps due to their disadvantageous acoustic properties. Unfortunately, the relation between consonant usage in language and tropical environments is a hypothesis that currently lacks strong evidence4.

Nevertheless, solid evidence on the influence the environment has on language was detailed in a 2015 study. Herein, they found that more humid locations exhibit a significant correlation for a language having complex tones (such as Mandarin and Vietnamese) compared to languages from dry climates. To conjure a complex tone, the vocal cords require precision, and in dry climates, the vocal cord vibration is imprecise. When the climate becomes more humid, the vocal chord ability isn’t negatively impacted by the air, meaning humid climates are more suited for complex tonal languages. Even though the geographical location is considered irrelevant for a speaker to use their mother tongue, the researchers hypothesised that languages would be more likely to lose or never develop a characteristic of speech that is at odds with the local air conditions5.

There is a huge range of factors that affect the form of a language. One point to note is that a weak but consistent cognitive bias – such as a minor environmental influence – that is repeated over generations can produce considerably strong effects6. While the work conducted so far is intriguing, more research is needed to clarify how environmental factors affect languages. From the chemical traces of insects to birdsong across climates, much is still to be deciphered about the nature of communication.

Have u heard of a “living will”, “advance directive”, “deluxe dying” or “The Order of the Good Death”? Intrigued, or spooked?

If you’re at the Refreshers Fair in GUU, we’re in the Debates Chamber - come say hi and grab a free magazine! 😄

Thanks to everyone who entered our first video competition and congrats to those who made it onto the big screen! This was so fun to organise with @GlasgowGist @SteveatThree1 and @scottishscicomm - what a team 🤘Can’t wait to go and watch the videos all over again 🤓 https://twitter.com/glasgowgist/status/1217453700702265344