American pharmaceutical giant Johnson & Johnson is currently fighting more than 9,000 lawsuits involving their talc-based products. Many of these are based on the allegation that their popular Baby Powder has led to users developing ovarian cancer. Talcum powder is a refined form of talc, a clay mineral containing magnesium, silicon and oxygen. Its use dates back to ancient Egypt1. Today, talc is still one of the most common ingredients in cosmetic powders, however, it is best known for its absorptive properties. Johnson’s Baby Powder has been on our shelves for over 100 years and has been dusted onto thousands of bottoms around the world, minimising friction and preventing nappy rash. Johnson’s “best for baby, best for you” branding was extremely popular with mothers, leading the company to market Baby Powder as a feminine hygiene product. In an interview for The New York Times Magazine in the 1980s, the company revealed that 70% of Baby Powder users were actually adults. The potential link with ovarian cancer has been causing controversy since the ‘80s, but no warning label has been added to the products, and a recent spate of lawsuits has seen Johnson & Johnson ordered to pay out billions of dollars in compensation.

Originally, concern that talc had the potential to cause cancer was raised due to some naturally occurring talc being mined in close proximity to asbestos (a substance proven to cause cancer). Microscopic asbestos fibres have no smell or taste, and once inhaled, can cause a variety of cancers of the lung and the surrounding pleura. Despite chemical similarities between talc and asbestos, they are morphologically distinct and belong to different mineral subgroups. It is well documented that asbestos’ carcinogenic properties are due to its fibrous morphology, enabling the substance to accumulate in body tissues causing chronic inflammation and cellular damage over time. As it is rare for talc to occur in a fibrous form, many researchers doubt that talc is a carcinogen. However, it is listed as “possibly carcinogenic” by the International Agency for Research on Cancer (IARC), the World Health Organisation’s specialised cancer agency.

Since 1982, several case-control studies have been undertaken to investigate the association between talcum powder and ovarian cancer. Researchers were able to observe a link, suggesting that dusting talcum powder on the perineum led to an increased risk of developing ovarian cancer. This may sound like solid proof that talc is carcinogenic, but a number of concerns have been raised about the findings. While these studies reached the same conclusion, there was great variation in methodology and the size of the increased risk determined. In addition, a lack of dose-response curve has led to criticism. The dose-response curve is one of the most fundamental concepts in pharmacology and describes the relationship between the affect on an individual caused by exposure to different concentrations of a substance. Not being able to reproduce this data makes determining the presence (or absence) of a cause-effect relationship extremely difficult.

On top of this, case-control study design can be problematic. These studies are inherently prone to bias; subjects are not randomised into exposed or unexposed groups but are observed by researchers who can deduce both their exposure to a cancer-causing substance and the outcome. Case-control studies provide less evidence for causal inference than randomised controlled trials; however, despite being the gold standard, conducting this type of trial would be unethical as researchers would be required to deliberately expose women to the suspected carcinogen. Instead, researchers can draw conclusions about inference from three factors: assessing the strength of the proposed association, the consistency of findings across multiple studies, and proposed biological mechanism underlying development of the disease. Looking at these factors across multiple studies, several research groups believe that the association observed between talc and ovarian cancer is statistically weak2.

Inaccurate reporting across studies may contribute to the varied results observed, as participants had to remember their talc usage over time. A meta-analysis of 16 case-control studies that found an association between the use of talc on the perineum and ovarian cancer concluded that the relative risk is 1.3. In other words, habitual users of perineal talc would have a 30% increased risk (compared to non-users) in contracting this already rare cancer. This is difficult to visualise, but relative risk below 1.5 is considered to be fairly small3. This data analysis has been interpreted as proof that talc has a causal role in the development of ovarian cancer, however, as it is difficult to control for brand and quantity of talc used, in addition to the frequency and location of use over a number of years, comparing results across studies is complex. Many of the case-control studies investigated only compared one or two of those factors.

Jacqueline Fox blamed Johnson & Johnson’s products for causing her aggressive ovarian cancer; she had been habitually dusting Baby Powder in her underwear since she was a teenager. She passed away in 2015, and a jury awarded her family $72 million in damages after finding Johnson & Johnson liable for negligence, conspiracy, and for failing to warn customers of the potential risk of dusting Baby Powder in the genital area. The foreman of the jury said they reached this verdict after a series of internal memos presented during the trial that gave the impression that the company were “hiding something”. Dr Roberta Ness, former dean of the University of Texas School of Public Health and former president of the American Epidemiological Society, testified as an expert witness in the trial. She criticised the studies finding no link between perineal talc use and ovarian cancer, claiming that only five studies measured both frequency and duration of talc use (although similar concerns have been raised about studies that did find a link). Johnson & Johnson felt they did not have a responsibility to add warning labels to products as they could not conclusively prove that talc dusted on the genitals can reach the ovaries. Dr Ness made it clear that she believes this does not excuse the company from their duty to warn Baby Powder users of any known association with health risks. Following the verdict, 17,000 people contacted Fox’s attorneys with claims of their own. This verdict was eventually reversed on appeal, not because of any new evidence or distorted science, but because the trial took place in Missouri instead of the plaintiff’s hometown Alabama4. Fundamentally, lawyers and expert witnesses in the case seemed to realise that the science supporting a link between perineal talc dusting and ovarian cancer is disputed. However controversial it may be, it is still peer-reviewed scientific evidence, and the jury believed that Johnson & Johnson should have warned their customers that this evidence existed.

In July of this year, again in Missouri, a judge ordered Johnson & Johnson to pay $4.7 billion in damages to 22 women alleging that talcum powder caused their ovarian cancer. This figure is one of the highest ever awarded for punitive damages in a product liability case. Perhaps taking the scientific evidence (and more likely previous successful appeals) into consideration, this most recent lawsuit is the first to suggest that the ovarian cancer was not caused directly by talc, but by talc contaminated with asbestos. The IARC states that ovarian cancer is one of only four cancer types that can definitely be caused by asbestos exposure. This conclusion has been reached as researchers have found asbestos accumulated in the ovaries of women who have died from ovarian cancer, but the way it reaches the ovaries has still not been proven. Some more unusual theories suggest that asbestos might reach the ovaries through the blood or the lymphatic system5. However, if dusting your genitals with contaminated talc, the most likely route for asbestos would be through the reproductive tract. This is still an impressive feat, as in order for the microscopic fibres to reach the ovaries they would have to travel a distance of approximately 18cm. 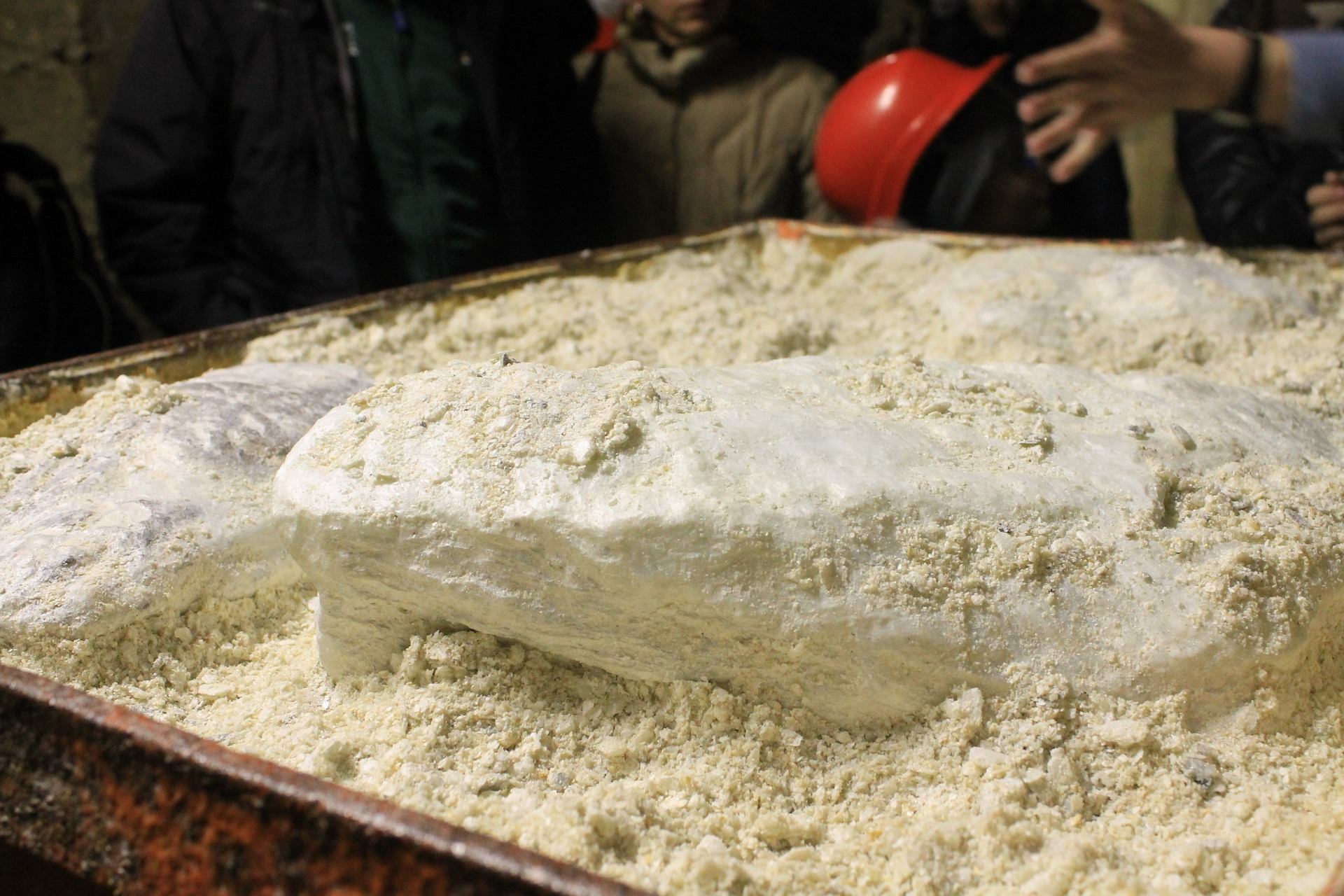 A talc mine. Credit: Pixabay

In the US, FDA safety regulations are in place to ensure that talcum powder products are asbestos-free. These rules were introduced in the mid-1970s when the link between asbestos and cancer was first suspected, however, as asbestos-related cancers can take years, if not decades to develop6, cases from before the regulations were introduced are still being diagnosed today. However, many were shocked by the verdict of this latest trial, as several of the plaintiffs began using Baby Powder after the FDA regulations were brought in. During the suit, lawyers representing the women alleged that Johnson & Johnson were aware that their Baby Powder products were contaminated with asbestos and have been systematically covering it up since the ‘70s. Witnesses in the trial claimed that talc becomes contaminated with asbestos during the mining process and that it is impossible to separate the two substances. Johnson & Johnson refute this allegation, stating that they have rigorous purification and testing protocols in place. In response to persistent public concern, a year-long study commissioned by the FDA in 2009 investigated the asbestos content in an array of talc products, including Johnson’s Baby Powder. None of the samples tested by researchers were found to contain any asbestos fibres7. Despite the FDA findings, it was claimed during the trial that many of the women had talc and asbestos present in their ovaries. Johnson & Johnson are appealing the verdict.

It is possible that further scientific study will reveal a causal link between genital talc dusting and ovarian cancer, but for now, the National Cancer Institute states that the “weight of evidence” does not support this8. This may not be enough to let Johnson & Johnson off the hook; lawyers have acknowledged that they are not interested in the science. Plaintiffs in Baby Powder cases are suing in small groups to maximise the impact on the jury. Mark Lanier, a lawyer representing the group of 22 women, stated “It’s easier to get justice in small groups. In small groups, people have names, but in large groups, they’re numbers”9. Many of the expert witnesses in the trials have admitted that the science is ambiguous and that more study is necessary. However, this was not what stuck with the jury. They weren’t interested in study design or statistics, what they saw was that there was some evidence of a connection between talcum powder and ovarian cancer. They felt that pharmaceutical companies should not be able to pick and choose what study results they share. At best, Johnson & Johnson failed to warn their customers of a potential risk; at worst, they covered it up.

This article was specialist edited by Miruna Costreie and copy-edited by Kirstin Woollcott.

Katrina is the Strathclyde Editor-in-chief of theGIST. She is a PhD student in Optical Medical Imaging with Healthcare Innovation and Entrepreneurship.