A New Step in Cancer Immunotherapy

Vaccines against cancer have been a long sought-after treatment for the disease. Our many attempts to make this treatment work has often ended up deadly, until now.

T cells are excellent at coordinating massive assaults on specific pathogens that will destroy less ‘self’ cells in comparison to simple innate immunity. The problem with T cells is that they are specific to one kind of antigen, therefore, finding the exact T cell that will respond to the exact foreign antigen found by the innate immune cells often takes a long time. This can be avoided, however, if the body has previously encountered the pathogen and thus recognises the antigen presented. This recognition is thanks to the adaptive immune system, which has the ability to develop “memory” cells, allowing for a much faster response to further infection. 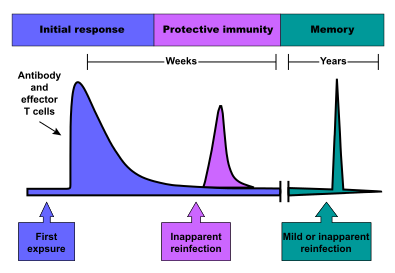 This is famously how most individuals do not develop chickenpox virus a second time in their life (although it can happen and potentially lead to infertility in adults). Vaccination seeks to utilise this memory process by artificially introducing antigens to the body in tandem with an adjuvant, a chemical that increases your body’s immune response. This then ensures your body can quickly fight off an infection you have never actually been introduced to before.

There are multiple forms of vaccines, each usually defined by what they cause the body to target during infections. For example, an inactivated vaccine is a vaccine made from an inactivated, dead or severely weakened form of the pathogen. Such a pathogen is easy-picking for the immune system to fight off and in doing so a memory of the pathogens’ antigens is created, so if the pathogen returns the body is better able it fight it off. A toxoid vaccine introduces weakened pathogenic toxins called toxoids to the immune system, giving immunity to the toxins produced by the diseases rather than the disease itself. The tetanus infection, for example, is prevented by a toxoid vaccine. There is a huge range of different vaccines simply because there is a huge range of diseases your body can create memory for 1.

The idea of cancer vaccines is based around the fact that the immune system has defence mechanisms already in place to destroy cancer cells – this is the reason that, despite it being estimated the average body develops one million cancer cells every day, the majority of the human population isn’t suffering from cancer 2. Cancer vaccines defy our general understanding of vaccines as they are administered after someone is ill. Rather than help our body target foreign antigens, they encourage the body to attack cancerous cells, which in essence are our own cells that divide rapidly and do not respond to bodily signals, creating tumours.

How the body fights cancer:

Immune defence against cancer is much trickier than with most infections, primarily as the target for the immune system is an uncontrollable mass that can mutate rapidly enough to change its antigens. The situation is further complicated by the fact that cancer cells often reduce the expression of a key receptor called MHC Class 1. This receptor is expressed by nearly every cell in the body and allows communication between the immune system and cells. It is through these receptors that the immune system can trigger cell death in rogue cells and without them the job simply gets harder. However, an innate immune cell called a Natural Killer (NK) cell can detect reduced MHC Class 1 Receptor expression, thus detecting the presence of cancer. Once a cancer cell is detected, the NK cell will coat it in chemicals that will either destroy the cancer cell or make it a target for other immune cells such as macrophages. Unfortunately, it is indiscriminate with its killing and can cause just as much damage to the body as it can to the cancer, unlike its acquired immune system cousin, a T “killer” cell.

T cells come in two flavours, T killer cells and T “helper” cells. If the immune system is an army, T “helper” cells are the officers, orchestrating tailored attacks and producing chemicals called cytokines to encourage the other immune cells to fight harder. T killer cells, however, are more interested in taking out traitors to the cause, destroying ‘self’ cells that pose a threat to normal bodily functions, cancerous cells being the key example of this cell type. T killer cells require the presence of MHC Class 1 for clean, surgical killing, but can effectively kill cancerous cells without nearly as much collateral damage as NK cells. 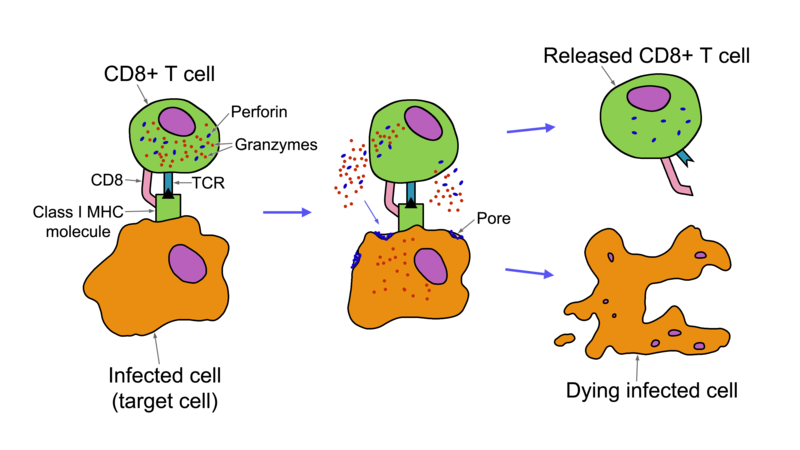 All of this is orchestrated by T helper cells, which as their name implies aids the immune system against any invader by recruiting and activating more cells, organising the clean-up and eventually storing immune memory of the antigen.

Whilst these immune processes are extremely effective, they are often faced with numerous problems as cancerous cells mutate so quickly they can often shut off any of the danger signals that are essential to elicit an immune response.

The science of cancer vaccines:

A cancer vaccine works by essentially creating an artificial danger signal within the tumour itself, utilising T cells that can recognise the tumour left over from the initial immune response to release chemical ‘help’ signals, thereby ushering in a huge immune response. In the past, this has been dangerous when tested in humans and mice, due to a phenomenon called ‘cytokine storm’, where triggering a huge immune response has caused severe, long-term damage to a person. However, so far this vaccine has shown no severe damage to mice and is moving to a 15-man human trial soon.

Recent research led by Ronald Levy and Idit Sagiv-Barfi at the Stanford University School of Medicine in early 2018 has furthered our understanding and control over cancer vaccines, by developing a vaccine that has seen uncontested success. The cancer vaccine developed by this research team is made up of two key components, a short strand of bacterial DNA, called a CpG oligonucleotide, and an antibody. The DNA acts as a danger signal for the T cell, causing it to express more of a protein called OX40 which is used to elicit a strong immune response. However, in tandem with the antibody (which has been designed to bind to OX40), the immune system is able to very easily pick up OX40, allowing for a huge immune assault on the tumour whilst retaining its memory on how to fight the tumour in future, preventing the regrowth of those specific cancer cells. Interestingly, these T cells are then able to move out of the tumour and orchestrate an attack on metastasised (broken off) tumours throughout the body.

Trials of the vaccine have been carried out on mice and the results were extremely promising. A large group of mice were all artificially given two mouse lymphoma tumours in separate locations. Injecting the vaccine into one of the tumours eradicated both tumours in 87 out of 90 mice. The three mice that had the tumours grow back responded well to a second treatment. It is important to note that these tumours were artificially given, so were not representative of spontaneous tumours.

However, the researchers addressed this discrepancy and genetically engineered mice to be susceptible to breast cancers, which are notorious for metastasising into more tumours.  Once treated with the vaccine, the mice were less likely to develop future tumours and lived much longer. When the researchers induced the mice with two lymphoma tumours and a colonic cancer tumour, they discovered that treatment using the same vaccine cannot prevent different types of cancers. When the vaccine was injected into one of the lymphoma tumours, the lymphoma tumour along with the first was eliminated but there was no effect on the colon tumour.

These are extremely promising results, especially when looking at possible treatments for the world’s second biggest killer 3. The researchers have gone on record saying: “I don’t think there’s a limit to the type of tumour we could potentially treat, as long as it has been infiltrated by the immune system.” 4.

With human trials beginning shortly, it is everyone’s hope that the excellent results seen in the mice experiments will be replicated. With such promise already being shown, it seems certain that the future of cancer research will be cancer immunotherapy. It is becoming more and more likely that we may have a universal cancer treatment in our lifetime, we will just simply have to wait and see the results from the human trials, and hope that, with this vaccine, the benefits outweigh the damage caused.

This article was specialist edited by Alisha Aman and copy edited by Kirsty Callan and Kirsten Woollcott.