The placebo effect, or placebo response, is a well-known medical mystery that is one of the strangest examples of ‘mind over matter’. To see the placebo effect in action, a patient is given what they believe to be real medicine for a health problem they are experiencing, however, they are instead unknowingly given a fake treatment such as a sugar pill. Everything we know about science and physiology tells us that the patients should come back complaining that the pills had no effect, but some will usually return saying their symptoms actually improved.

Since it was first discovered in the late 18th century by John Haygarth, scientists have been trying to understand why simply believing that you will feel better can be enough to ‘trick’ the body into recovery1. You can even see evidence of this recovery in real physiological measures; someone who thinks they have been given a stimulant might find that their heart rate and blood pressure both increase, while someone given a fake sleeping pill might find the opposite effect2. You can even manipulate how strong the placebo effect will be by changing the suggested ‘strength’ of the placebo. Someone given four sugar pills may feel much better than someone given two, yet a sham acupuncture session may make them feel even better than that3.

The existence of a placebo response could be largely beneficial – it suggests that some patients may not have to use real medicines which come with complications, such as addictive painkillers like codeine and tramadol. However, having a placebo response could mask whether a drug was medically effective or not. In an iconic paper discussing the placebo effect published in 1955, Henry Beecher stated the importance of conducting double-blind clinical trials, in order to ensure any improvement in symptoms could be attributed to the relevant treatment4. In double-blind studies, neither the participants nor the experimenter know who has been placed in which experimental group (real medicine or placebo). If patients are told whether they are receiving the active drug or not, simply the belief that their symptoms will or will not improve could be enough to sway the outcome of a trial, and even the experimenter knowing which is which could cause a difference between groups.

There are many people who believe in alternative medicines. A recent survey by YouGov found that 39% of voters from the general public believe that homeopathy (complementary or alternative medicine) is effective, while 39% believe it to be ineffective5. However, the majority of experts have strong opinions that homeopathy simply does not work, and that any effect can instead be described as a placebo response6. 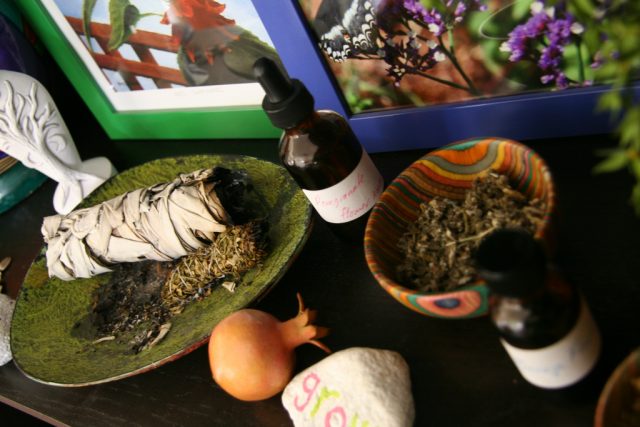 Herbal remedies have been used for thousands of years, and many people today believe that they can be effective treatments. Credits: Latisha via Flickr

Part of the confusion over whether alternative therapies work comes from evidence that certain herbal remedies can have a medicinal effect. For example, one herbal medicine called St John’s Wort, which contains the active ingredients hypericin and hyperforin, could possibly help alleviate depression, however there is still no conclusive evidence7. Probiotics can offer relief from gastrointestinal problems, and krill oil could help prevent or alleviate arthritis, but therapies like these still do not have enough empirical support and are prone to a placebo response creating the illusion of medical efficacy8,9. The NHS website actually warns that choosing an alternative medicine could risk you missing a more effective medical treatment, due in part to this potential for developing a placebo response, however they also acknowledge that this same placebo effect can be beneficial10.

Interestingly, there also exists a ‘nocebo’ effect, where warning a patient of negative effects of a treatment can result in them really experiencing them. In one study, two groups of chronic back pain sufferers were recruited to undergo a flexibility test, but only one group was warned beforehand that the procedure might be painful. Those who were pre-warned of pain reported significantly higher levels of pain during the test, despite having had exactly the same flexibility test as the control group11. This effect could even be strong enough to kill – one documented case described someone who believed they had swallowed real pills while trying to commit suicide, however, they had actually swallowed sugar pills. Despite this, their blood pressure dropped so dramatically that they required intervention and fluid injections to stabilise them12. The power of this effect became even clearer once the patient was told that they had swallowed sugar pills and their symptoms quickly disappeared.

Few can deny that the placebo effect exists, and that it can cause powerful, measurable physiological changes. However, until now the neurological cause for this has been a mystery. A recent experiment published in PLOS Biology claims to have found a ‘placebo area’ in the brain13.

In the first part of the study, chronic pain patients were told that they were taking part in a clinical trial for a new analgesic (painkiller), but in reality all participants received sugar pills. As expected, a greater number of the participants given sugar pills reported an analgesic effect, compared to a no-treatment control group where few reported an improvement. However, the crucial part of this study used fMRI to measure the blood oxygen level dependent (BOLD) response of patients’ brains during the instruction period. The researchers found that placebo responders showed differences in activity in an area of the brain called the right middle frontal gyrus (rMFG). They found that these same participants had increased levels of connectivity from their rMFG to the rest of the brain. Interestingly, this area has previously been described as an area where two attention networks in the brain meet, and this connectivity difference could be an explanation for why some exhibit the response while others do not14. 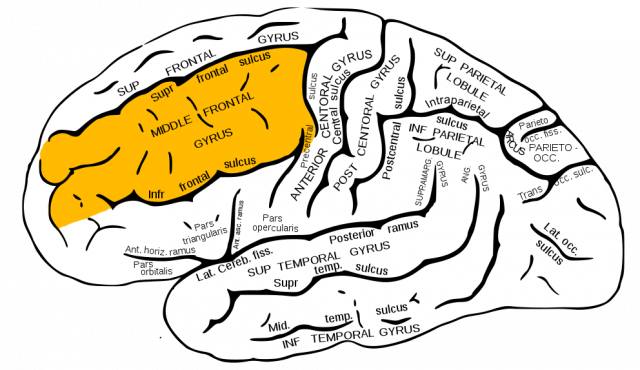 Placebo responders had differences in brain connectivity going to and from the right middle frontal gyrus, shown in this diagram. Credits: WikiCommons

The experiment built on these findings by comparing placebo and active drug groups during an analgesic clinical trial. Equal numbers of patients from both the placebo and active drug groups reported that the treatment they had received helped to relieve their symptoms, and the placebo was rated just as effective as the active drug. Amazingly, the researchers found the same pattern of connectivity in the rMFG in placebo responders as they did in the first part of the study, and they were able to identify them using this marker with 95% accuracy.

This study suggests that this mysterious effect, one which many have discussed as a matter of belief, higher thinking, and more complex cognition, might come down to something as simple (relatively) as a difference in brain structure. The cause of the placebo response has long eluded science, and it is exciting that research techniques have advanced enough to begin to grasp an understanding of it. It seems to be a neural process that involves higher thinking, attention, and physiological responses, which together involve a highly complex network within the brain. While the existence of this placebo area would need to be confirmed with more research, it could potentially lead to a reliable way of identifying how susceptible someone might be to ‘believing’ their way into recovery.

In summary, the placebo effect seems to consistently cause some patients to respond to a false treatment in a specific way, largely because of their trust in the treatment and belief that it will work, despite its lack of an active ingredient. It remains of great interest to science and the general public, and research such as this can only lead us to more exciting discoveries about how small changes to the complex wiring of our brains can add up to such fascinating differences in the way we respond to things in our world.

This article was specialist edited by Miruna Costreie and copy edited by Rebecca Laidlaw.