The Future of Stratified Medicine

Joan* is a 15-year-old girl and she has multiple cancers riddling her body. Despite treatment with a cocktail of medications, she is getting worse. The cancer has spread to most of her organs and her chances of survival grow bleaker by the day.

Unable to find any clinical explanation, Joan’s genome was sequenced. This analysis revealed that she was carrying a genetic variant that made her resistant to the drugs being used to treat her cancer. Based on this information, her doctors changed her treatment, but it was too late and the damage done could not be reversed.

Joan’s story isn’t just an apocryphal tale used to highlight the importance of a personalised approach to modern medicine, but is an example of a real scenario that is happening in hospitals throughout the world every day.

Precision medicine is an emerging area of research and clinical study that sheds the old trial and error approach to disease treatment and focuses on what makes you you! It explores the DNA sequence of a person to ascertain whether the medications prescribed are beneficial, with little or no toxic effect.

Even though two human beings are genetically 99.9% identical, the 0.1% variation in their genetic code makes all the difference – varying body structure, skin colour, and disease susceptibility to name a few. Furthermore, these variants also determine how a person responds to a drug; a drug that could cure one person may prove to be toxic to another thanks to these variants. Essentially, precision medicine means “targeting the right treatment to the right person at the right time.”1

Conventional treatment is when one drug is prescribed to anyone with a particular condition, for example hypertension or high blood pressure. However, only some people show improvement and are called responders, while the rest do not show a response – these are the non-responders. Some people suffer side effects and are clinically known as toxic responders.

If patients could be separated into these three groups by a test, doctors would be able to prescribe the most beneficial medication for a patient and save toxic responders from any adverse side effects, whilst also saving the NHS time and money.

So how do doctors know which drug to prescribe? This is where pharmacogenomics come into play, with decades of research finally now beginning to bear fruit in the clinical environment. Everything starts in the research laboratory, where the effects of these genetic variants are studied and new drugs are developed based on these effects. This is followed by years of clinical trials and ultimately approval to be used in the clinics. Simultaneously, these data are also updated in numerous pharmacogenomic databases and are made readily available to clinical laboratories around the world. Pharmacogenomic databases, such as PharmGKB, are a treasure trove of information for clinicians and scientists alike, allowing doctors to know what the likely effect of a drug will be on the patient, whilst also allowing identifying variants that require further research.

Tailored just for you

There are around 30 trillion cells in the human body. These cells divide at a controlled pace and help us grow, heal and function. At some point, a cell will die and this is a natural part of the ageing process. However, sometimes a few cells can turn rogue and start dividing uncontrollably, forming tumours. Some of these tumour cells then keep on growing at a very rapid rate, invading other cells too. These are malignant tumours, but we better know them as cancer. These are the result of a cell accumulating numerous mutations, either germline (those inherited) or somatic (those acquired after being conceived).

The implications of precision medicine in cancer treatment are massive.

Mutations occur at random, so two people with breast cancer, for example, will have two genetically non-identical tumours. They are different. In precision medicine, these tumours are genotyped to identify the driver mutations – the ones that make the cells metastatic.Tailored drugs are then prescribed to target and destroy the cells with these particular mutations.

This is far more effective than the conventional chemotherapy approach, where the drugs prescribed destroy any rapidly proliferating cells, whether cancerous or not, which leads to the loss of many healthy cells.

This has changed the way cancer patients were grouped. Previously, it was based on the location of their tumour, for example breast, prostate, pancreas etc. With advancements in the understanding of cancer genomics, it has become clearer that regardless of the location of the tumour, cancers with the same driver mutations are similar. A breast and pancreatic cancer with the same driver mutation can be targeted and treated in the same way. Hence, for a clinical trial that targets a specific driver mutation, the genetic profile of the patients can be used to recruit only the ones for whom the treatment will prove to be effective.

Genetic variants not only identify what types of drug may be effective, but also what dosage is required. Many variants affect a drug’s rate of metabolism in the body and depending on this, two people with the same tumour and driver mutations may require different doses of the same drug. 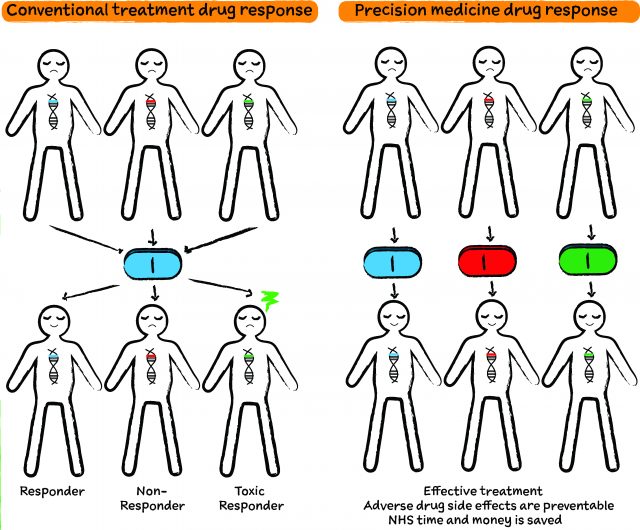 Afterall, one size does not fit all

“Precision medicine is important as it provides a disruptive technology and disruptive thinking in the process of practice of medicine” says Professor Anna Dominiczak, Head of the College of Medical Veterinary and Life Sciences and the Vice Principal of the University of Glasgow. Professor Dominiczak, working closely with the NHS and industry, has been a key player in developing the use of precision medicine here in Scotland.

As we are beginning to understand the enormous complexity of the human genome, the “one-size-fits-all” approach is losing its weight, even for simple things like headaches. For conditions like hypertension, we can try different medications to see which one works. The patient has time. But for diseases like cancer, time is of the utmost importance.

Experimenting with different drugs to find one that the patient responds to may take a lot of time and expense. In some cases, the patient is may be unlikely to last long enough to find the right drug for them. For example, in colon cancer, which is responsible for around 10% of all cancer deaths in the UK 2, patients whose tumours have specific mutations in the KRAS gene are non-responders to the drugs cetuximab (Erbitux) and panitumumab (Vectibix)3. Hence, if they are prescribed these drugs for chemotherapy, the tumour will continue to grow unabated, wasting time, money, and most importantly, a life. Today, the NHS does check for KRAS gene mutations in colon cancer patients prior to prescribing chemotherapy, which is a step in the right direction towards precision medicine.

With both the UK and USA deciding to invest a huge amount of funding towards the development of precision medicine, Scotland is placed at the forefront, with the establishment of the Stratified Medicine Scotland Innovation Centre (SMS-IC) dedicated to the development of precision medicine, in collaboration with the NHS and other partners including Universities of Edinburgh, Dundee and Aberdeen, Aridhia Informatics and Thermo Fisher Scientific.

Scotland has a population of just over 5 million people, a number which just happens to be ideal for the study of precision medicine. Compound this with Scotland’s very well-organised medical record system, spread across 14 health boards, and you have excellent conditions in which to test precision medicine.

Founded in 1996, the Community Health Index or the CHI number is unique to the Scottish population and is responsible for maintaining the health record of every individual in Scotland electronically. Thus, every detail of a person’s health journey from birth is right there, accessible to doctors from any health centre, hence allowing efficient data management for more streamlined research. Also, surveys have shown that the people in Scotland have an increased predisposition to chronic illnesses, placing this country at a strategic point for the development of precision medicine1.

Some of the ongoing SMS-IC projects encompass the development of precision medicine for the identification of genetic biomarkers for drug response for pancreatic and oesophageal cancer, inflammatory bowel disease, chronic obstructive pulmonary disorder (COPD), and multiple sclerosis. It combines the clinical and genetic information for patient stratification to methotrexate that is used for rheumatoid arthritis, and identification of DNA repair gene mutations for the usage of PARP inhibitors in ovarian cancer.

There are always obstacles in the way of progress and it seems our own human genome may prove the toughest at the moment. The way our genes switch on and off isn’t simple and there are many factors that affect this. If DNA is the recipe book, epigenetics decides what gets cooked and when. To add to this, there are millions of variants in our non-coding DNA too and how these affect the expression of our genes and interaction with drugs is still largely unknown.

This emphasises the importance of basic research if we are to succeed in this attempt to revolutionise the way we treat human diseases, but the dwindling funds for basic research is somewhat hindering this. It can take decades for teams of scientists to make breakthroughs in our understanding of disease and even longer to develop drugs that are effective in the treatment of these diseases.

Many people fail to realise the complexity of scientific research and how even small improvements in our understanding can take many years of exhaustive work. The competitive nature of grant funding for academic research means that often rarer diseases will go unfunded and, as such, unresearched, with the more well-known diseases receiving more than the lion’s share of funding.

The waters are further muddied when we consider the societal implications of DNA sequencing. Could insurance companies demand higher premiums from a customer who has a genetic variant that requires them to have a treatment with a more expensive drug if they were to fall ill? Legislation needs to keep apace with scientific progress to ensure the interests of the patient are kept at the forefront.

It will require a lot of effort to overcome these issues, but support from the government is of utmost importance. Public education in how genetics influence disease progression and drug efficiency will also play a key role in surmounting these obstacles.

With continued progress, the incorporation of precision medicine into the healthcare environment will very soon become a reality. Imagine a world where your entire genome can be sequenced cheaply and every drug you are prescribed thereafter, for anything from cancer to depression to a headache, is tailored just for you. Such a world may only be a few decades away.

TheGIST is very grateful to the following people for taking out time of their hectic schedules and providing insight into the landscape of precision medicine in Scotland:

A special thanks to Dr. Saeeda Bhatti for providing and helping in gathering all the content used for this article.

This article was specialist edited by Derek Connor and copy edited by Kim Wood.