The Valdiva expedition set out on July 1898; its mission was to traverse the west of coast of Africa, the Gulf of Guinea, the Indian Ocean and the Antarctic sea and capture deep sea organisms for scientific study. Among the scientists on board was Carl Chun, a zoologist specializing in squid – he was about to uncover a terrifying monster of the deep that was thought only to exist in the darkest depths of the human psyche – Vampyrotheuthis infernalis1.

The species name literally means ‘Vampire squid from hell’2. It’s an apt name, if slightly flamboyant: the dark blood-red squid has 8 tapering arms lined with fleshy webbing between each arm, forming a fleshy funnel that could latch onto someone’s face à la the face hugger from Alien. 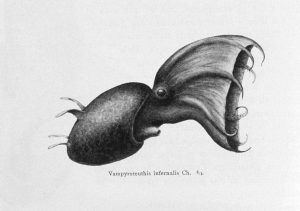 A drawing of Vampyrotheuthis infernalis by Carl Chun. With its bulging eyes and dark funnel on the end, this drawing in black and white evokes an image of a cloaked villain similar to Nosferatu. Image credit: Carl Chun, 1903. Public domain

However, such frightful imagery says more about us than the squid; V.infernalis is a 30cm long, shy and sluggish animal that feeds on the falling ‘marine snow’ (tiny particles of decaying organic matter)3. It uses two long, retractile filaments lined with hairs to catch the marine snow, which the animal then reels in to deposit the ‘snow’ near its mouth4.

Its home is the oxygen minimum zone, a 600m-1000m area where the oxygen concentration is so low that few other organisms can live within it and survive. To deal with the harshness of the oxygen minimum zone, the vampire squid has large gills to absorb as much oxygen from the water as possible and has a very low metabolism to reduce energy costs; to help with the reduction of energy costs further, it is neutrally buoyant and so it can just sit back and eat in the darkness5.

Despite rarely moving, it can get up and flee the scene very quickly for an underwater coach potato and uses two false eyes on the back of its body (which it can contract and expand), fooling a predator into thinking that it is getting away faster than it really is6. 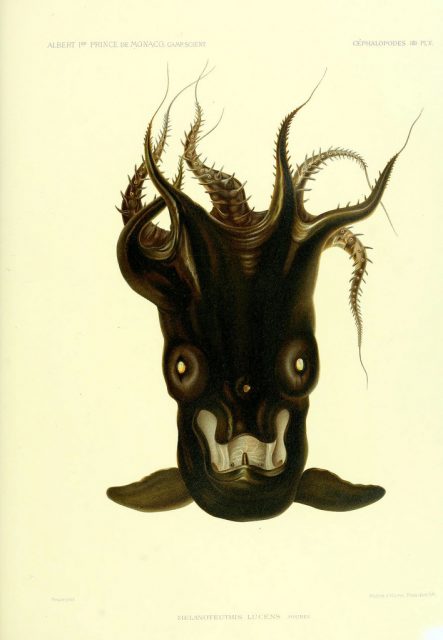 Strangely enough, it is isn’t even a squid: the vampire squid belongs to Vampyromorphida and is the last member of that group. Vampyromorphida is a line of cephalopods that are distinct from octopuses and squids and may even be an ancestral group that diverged from the early octopus and squid line, informing us about the obscure history of Earth’s most interesting animals7.

Those that can eke out a living within the oxygen minimum zone will find abundant food and few predators. Here in these harsh waters the vampire squid thrives – an absolutely fascinating creature that illustrates how animals fit their environment and tells us how much more there is still to know about the world’s oceans.