How Harmful Are Introduced Species?

An alien species can be an animal, plant or microbe introduced into an environment to which it is not native. Redistribution and colonisation can happen either deliberately or accidentally, and is exacerbated by globalisation. Potential alien species are imported inconspicuously; hidden in plants, stowed away in ships’ hulls or ballast water, even attached to travellers’ bags and shoes. Their tenacity and ability to thrive in new ecosystems often have devastating impacts on native species and human endeavours. This is why most people would umbrella all non-native organisms as harmful invasive species. However, in some situations, detailed inspection suggests this is not true. In many cases we have judged these migrant species too quickly. 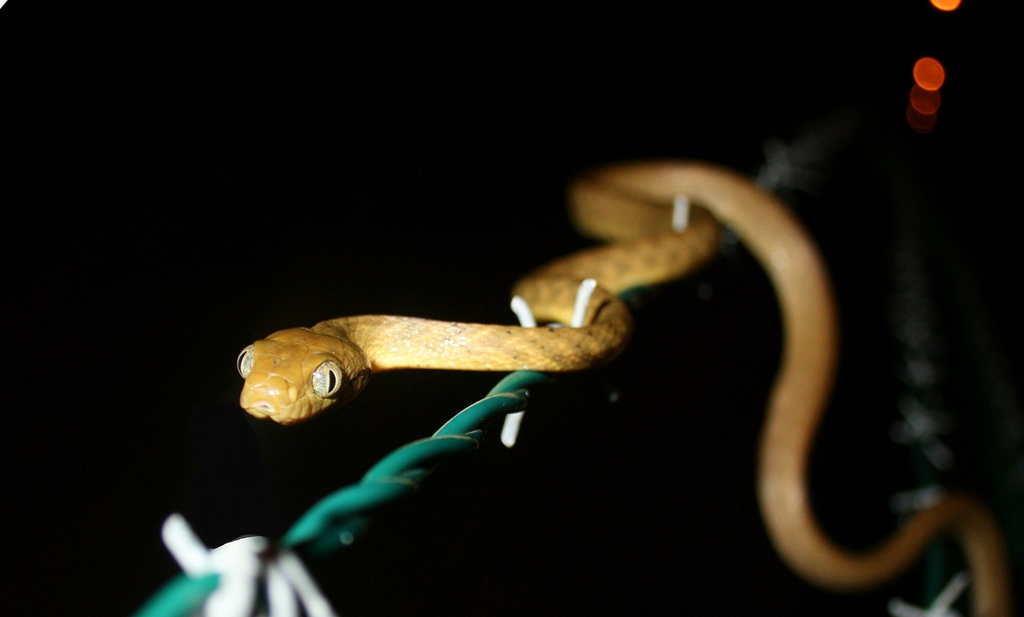 Guam has experienced a dramatic decline in native bird populations due to the accidental introduction of the brown tree snake. Image by USDA via flickr (CC BY 2.0).

There are numerous cases in which the explosion of an invasive species has led to the eradication of natives; the impacts are often most clear on isolated islands. Guam is a small U.S. island territory in Micronesia, in the Western Pacific, which experienced great conflict during World War II. Historically it was home to a diverse population of endemic forest birds found nowhere else on Earth. However, in the 1960s their numbers dramatically declined. Guam had 12 species of native forest birds, of which 10 are now extinct 1 and the others severely threatened. Initially researchers blamed pollutants, rats and habitat loss, but none of these turned out to be the culprit. Eventually, researchers identified the brown tree snake as the reason for the birds’ decline. This snake is believed to have hidden in a cargo ship carrying U.S. military equipment from Papua New Guinea to the island at the end of WWII. It had eluded discovery due to its camouflage and nocturnal behaviour. The brown tree snake has significantly reduced Guam’s species diversity, which has destabilised the ecosystem 2. This is a situation where the impact of an invasive species has been completely negative. In light of such dramatic cases, it would be easy to pigeon-hole invasive species as purely destructive, but research shows that some invaders have been wrongly vilified.

The plant genus Tamarix contains 54 species, of which Tamarix ramosissima is the most widespread in North America. Commonly known as tamarisk or saltcedar, it was introduced to North America as an ornamental plant from drier parts of Eurasia in the 1800s. There are large efforts to prevent its spread along the Colorado River, where it is accused of consuming large volumes of water and lowering the water table, allowing it to outcompete native species. Tamarisk also increases salinity in the soil, making it uninhabitable for salt-intolerant native plants. Since its introduction it has spread to cover a million acres, and a study in Afton Canyon, California, found that the area native plants occupy has 3. According to the global invasive species database 4, tamarisk is “a rampantly invasive shrub…dominating arid climates”. However, is it possible that tamarisk is being wrongly accused for the decline in native species?

The Colorado River has seen a lot of development and human alteration. Extensive dam creation and irrigation for agriculture has altered the water table, and the use of fertilisers and agricultural runoff has increased soil salinity 5. These factors have provided the basis for a new hypothesis — that anthropogenic activities are causing the environment to change and tamarisk is taking advantage of the newly emerged, more arid niche. However, due to a lack of records it would be hard to confirm whether the spread of tamarisk preceded or followed these human activities. Although this doesn’t prove that tamarisk is innocent, it doesn’t prove it is guilty for the decline in native species either.

A similar scenario is seen with the freshwater zebra mussel currently invading North America. These molluscs were accidentally introduced by ships that had taken on ballast water in Russian lakes. This species allegedly outcompetes native freshwater bivalves and causes infrastructural damage to structures like water intake pipes and turbines. However, studies carried out by the US Corp of Engineers 6 have highlighted several credible benefits of zebra mussel introduction. Due to their filter feeding activities, the water clarity in Lake Erie has increased by 1.8–4m, consequently increasing plant life by 6–30%. These bivalves are also becoming an important food source for diving duck species and other bottom feeders. 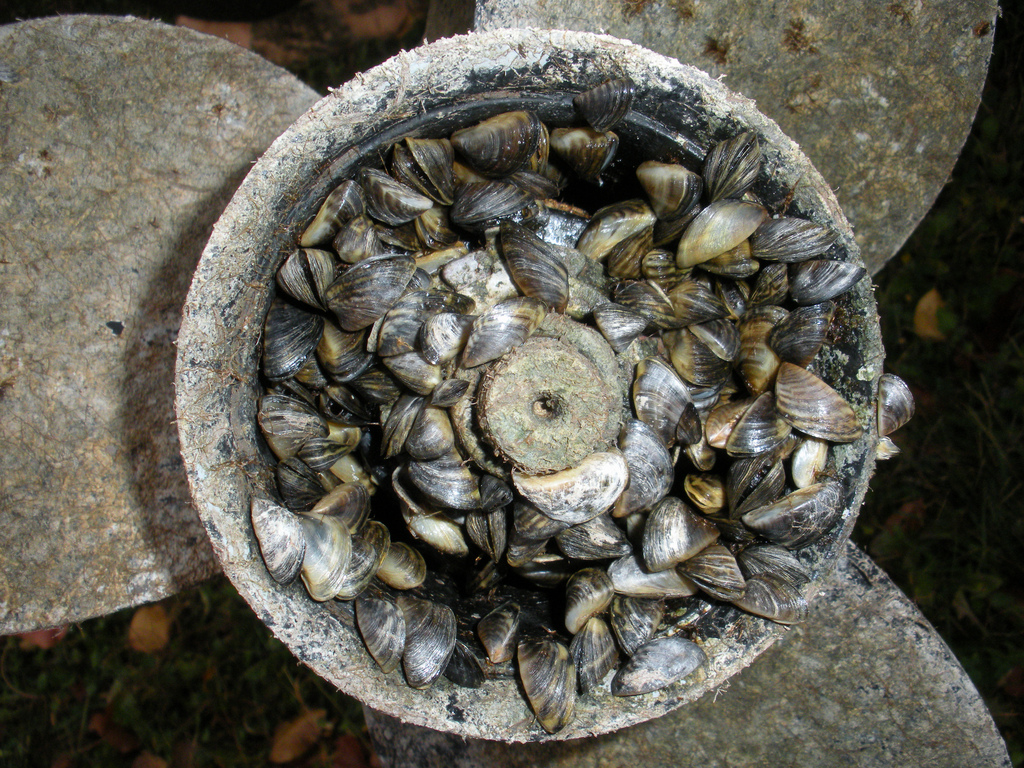 The zebra mussel can cause infrastructural damage as shown on this boat turbine. Image by TownePost Network via Flickr (CC BY 2.0).

Much like tamarisk, zebra mussels may be being used as a smokescreen for human activities. The decline of native bivalves 7 started before the introduction of the zebra mussel in the 1980s, and correlates with anthropogenic activity like dam construction, agriculture and pollution. It is becoming clear that there are some environmental benefits from zebra mussels and their full ecological impact is not completely understood. Establishing the complete relationship between invasive species and the native ecosystem can ensure a more effective management programme is implemented.

Non-native species that are wholly beneficial are hard to find, though there are some very important species that many people don’t even realise are introduced. For example, the European honey bee was introduced to North America by some of the first pioneers. These insects have become important pollinators for the agricultural industry, so much so that there are large projects for their protection. Similarly, Douglas fir trees have dominated UK coniferous forests since they were first transported from North America in 1827. Ireland’s forestry industry oversees 8,750 hectares of Douglas fir 8 and sees it as a valuable resource. Additionally, these trees have become an important refuge for buzzards, red squirrels, capercaillies, wild cats and more. Introduced species are accepted and welcomed when they hold economical significance. Only if their economic benefits are outweighed by their economic consequences are they perceived as invasive species.

From an environmental point of view, non-native species are sometimes negative, sometimes positive, and sometimes both. Invasive species devastating fragile ecosystems are a major threat to local biodiversity, and documenting their relationship with the environment is the first step to their control. However, this process forces us to challenge our preconceptions, allowing us to identify species that we may have misunderstood. This is particularly important as most beneficial invaders are so valuable to society that they are treated with the same conservation efforts as many native species. Understanding whether non-native species are positive or negative overall is fundamental for effective action. A more systematic approach to classifying non-native species is needed, rather than labelling them all harmful invaders. This may pave the way for a better understanding of management methods needed to maintain a healthy, productive ecosystem.

This article was specialist edited by James D. Burgon and copy edited by Nina Divorty.