Nanotechnology behind the evolution of iPhone

“Every once in a while a revolutionary product comes along that changes everything.”1

Thanks to the iPhone and other revolutionary products, Apple has become one of the biggest companies in the world. Overall, global electronics industries have undergone rapid growth over the last half century. Behind these achievements is the evolution of semiconductors. Size, cost, performance and power consumption are four aspects which have benefited greatly from nanotechnology.

The most important component inside electronic devices is the transistor. A transistor is an electronic switch which only has ‘on’ or ‘off’ states . A large number of transistors can be arranged in a certain manner to build logic blocks and integrated circuits. Since the first transistor was invented at Bell Labs in 1947, the size of a single transistor has continuously decreased in accordance with Moore’s law, an empirical law that shows the increasing speed of this component in an integrated circuit. In 1965, Gordon Moore found that the number of components per unit in integrated circuits can double every year. Ten years later, he revised the forecast to doubling every two years. As the number of transistors per unit increases, the electronic device itself can shrink. The benefit is also obvious in the price of transistors. In 1968, a single transistor cost $1. Five years later, the price decreased to $0.1. In 2002, a single transistor only cost $0.00000026. Gordon Moore himself once said that “Moore’s law is really about economics”.2 As a result, customers can buy higher performance electronic devices cheaper and cheaper each year. Thus, though the performance of the iPhone has doubled every year, we can still buy the latest iPhone for the same price as its predecessor.

Moore’s Law and Transistor’s Price. Credit: Thomas Scherer via elektormagazine and Singularity is Near

As the scaling continues, the modern transistor has already shrunk to nanoscale (1-100nm). The term ‘nm’ is a unit of length which stands for nanometre and equals to 10-9 m. Since Richard Feynman’s lecture “There’s plenty of room at the bottom” at the California Institute of Technology in 1959, the idea of manipulating individual atoms or molecules has inspired the field of nanotechnology. The word ‘nanotechnology’ was coined by a Japanese scientist Norio Taniguchi at the International Conference on Production Engineering at 1974, and was used to describe a process of separating, consolidating and deforming materials at nanoscale. The term was later popularised by K. Eric Drexler in the 1980s as the industry took off. Advances in nanotechnology allow semiconductor industries to make increasingly large numbers of transistors. William A. Swope, vice president at Intel, once said “Before, we were making them one at a time. Now we’re making them a billion at a time.”(Check out the lecture given by Will Swope at 3http://bigthink.com/videos/will-swope-on-sustaining-a-business-in-a-weak-economy4) 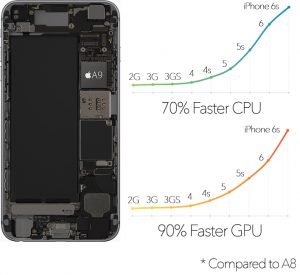 Apart from the lower cost for both manufacturers and customers, the enhancement of performance is another significant benefit of nanotechnology. As we can put more transistors in the CPU, the performance of electronic devices has increased proportionally to the decrease in transistor scaling. A new generation of technology (also known as node, which is the minimum metal line width of transistors) is introduced each time the minimum feature size of the transistors is reduced. Currently, the most advanced chip inside the iPhone 6s/6s Plus/SE, the Apple A9 chip, consists of billions of transistors. The Fin Field Effect Transistor (FinFET) technology they use has already scaled the transistor to 14nm (Samsung) and 16nm (TSMC) nodes. At each new node, various feature sizes of the circuit layout are normally reduced by 30%. This decrease leads to an area reduction of approximately 50% for the same performance (i.e. 70%, new component width, times 70%, new component length, = 50%, new area). Thus, even though the iPhone becomes thinner and lighter, it still boasts increased performance and storage.

The last benefit of transistor scaling is power consumption. What concerns most users may not be how fast the chip is or how thin the smartphone can be, but how long the battery lasts. As the smartphone becomes thinner and lighter, the power bank together with the phone becomes larger and heavier. To achieve longer battery life, increasing the battery capacity is a typical solution. However, transistor scaling can lower the power consumption by reducing the capacitance and supply voltage drop. Therefore, the battery life of portable devices can last longer even as they become more powerful. 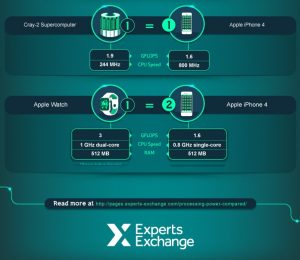 What will happen in the future? Well, both the iPhone and any other smartphone may have the same destination – becoming wearable devices. Since nanotechnology can shrink the size of electronic devices, and improve their performance as well, in 3-5 years , wearable devices may have the same capacity as the smartphones we are using today. In fact, the performance of an Apple Watch (2015) with a 1 GHz dual-core is slightly greater than two iPhone 4 devices (2010) which only has a single 0.8 GHz core, while the performance of an iPhone 4 is nearly equal to a Cray-2 supercomputer (1985) (for more information see Fig.4). The iPhone already has the ability to replace some functions which only personal computers could do in the past. In the near future, wearable devices may well take the place of smartphones. Luckily, as nanotechnology keeps rapidly evolving, we will likely be there to see whether this comes true.

This article was specialist edited by Manda Rasa Tamosauskaite and copy edited by Andrew Denman. 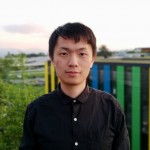 Yongpeng recently recieved his M.Sc. degree with distinction in nanoscience and nanotechnology from the University of Glasgow. He is currently an Assistant-Doctorant in Prof. Kevin Sivula's group at École polytechnique fédérale de Lausanne (EPFL).