The assisted evolution of corals

Bleaching is affecting corals worldwide: 19% of coral reefs have been lost and 35% of them are dying1with 93% of the world’s largest coral reef, the great barrier reef of Australia affected2. Loss of the corals themselves is a loss of the coral reef; 500 million people depend on coral reefs for food and many islands rely on them to reduce wave erosion3.

Coral bleaching is the ejection of the symbiotic, photosynthetic dinoflagellates (unicellular organisms with an external shell made of cellulose) under heat, light and chemical stress because the photochemical compounds of the dinoflagellates breaking down; evoking an immune response4. The symbionts provide pigmentation and food for their hosts and once ejected, the white limestone skeleton is revealed and the corals quickly die because they cannot sufficiently feed themselves. 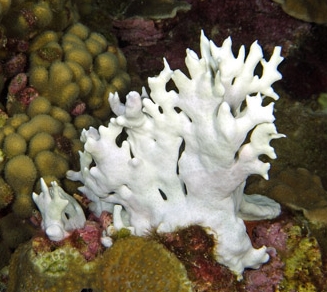 The coral in the center has been bleached, in stark in contrast to the colorful corals surrounding it. Image Credit: NOAA – Joyce & Frank Burek via Wikimedia (CC by 2.0 license)

Coral bleaching is expected to get worse as a result of global warming and increasing ocean acidification, so saving them is a humanitarian and ecological effort. Scientists are leading the effort via assisted evolution, which is using modern scientific knowledge along with the established techniques of artificial selection. This is in contrast to genetic modification, which seeks to modify a host organisms’ genome by inserting novel genes into the genome5. The modern scientific ideas involve epigenetics and the concept of the microbiome.

Epigenetics is the process of how cells store their genome, usually due to an external stimulus, and how the storage alters gene expression. It was found that some Samoan corals were able to tolerate the extreme temperatures of 35OC. Both the heat sensitive and heat tolerant were found to have the same 16, 728 genes. However, 74 of those genes had greatly altered expression; one of which encoded heat shock proteins, which act to mend broken proteins due to heat stress6. For scientists, the trick is to do this within a lab so as to maximize the benefit.

The relationship between the microorganisms and the host can be considered an ecosystem in itself; the microbes are to be considered a part of the organism due to such a relationship – this the microbiome concept. It’s already known that the corals are in a symbiotic relationship with dinoflagellates but there are different species of dinoflagellates that exist in different proportions within the coral tissue. Scientists are trying to figure out how to make corals select the more stress tolerant dinoflagellates, which are less likely to break down; however the more sensitive dinoflagellates are more likely to be picked by the coral because they can produce more food for the coral than the hardy species7. These new techniques of assisted evolution will hopefully create a super coral, with the fittest corals being taken from the lab and planted in the reef to regenerate it. 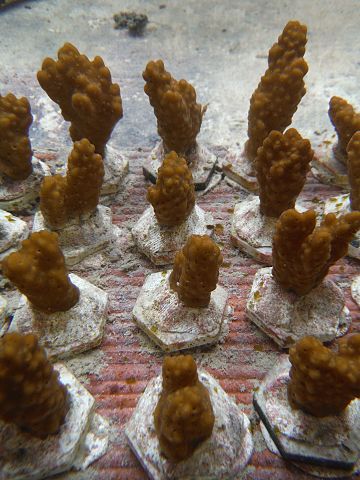