Laughing at Stupid Jokes Can Help Us in Court

Let me tell you a joke. Here it goes:

Two elephants were sitting in a tub and one elephant said, “Where’s the soap?” The other elephant says “No soap, radio”

Isn’t it hilarious? No? Good. This is one example of the “No soap, radio” joke 1 — a joke that is not supposed to be funny, however in the right circumstances can make us laugh. If the joke is told with enough confidence in front of large group of people, most of which are familiar with it and laugh hysterically at it, the rest will most probably laugh too, even though they don’t “get” the joke. This technique is also used on TV. The annoying laugh track in a comedy show? It’s been shown that people are more likely to laugh because other people do, just like the “No soap, radio” joke 2. But why does this happen? The simple answer: “conformity”. 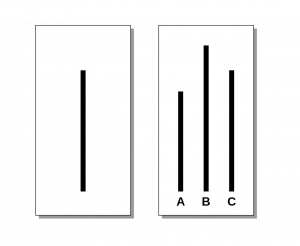 An example of the types of cards used in the Solomon Asch line experiments.
Image Credit: Fred the Oyster via WikiCommons

Conformity is the tendency of people to act or think like the majority, even when they disagree with it. We usually conform because we want to be accepted into society and feel safe and secure. One of the most famous experiments in this field is the “Asch conformity experiment” from the 1950s. In it, Solomon Asch devised a very simple task — show the participants three lines obviously different in length and another line that matched the length of one of them. The participants then had to say which two lines matched. He studied how a group of actors, who were told the right answers beforehand and were asked to purposely give the same wrong answer to some of the questions, influenced the answer of the participants. The experiment was set up in such a way that the participants would hear the answers of the most confederates (who, from the participants’ point of view were just other participants) before giving their responses. The control experiment showed that nearly every person was capable of identifying the correct line when asked alone. Interestingly, the results differed drastically when the test was performed in groups: here three out of four participants followed the wrong answer given by the confederates at least once 3.

The Asch study showed just how easily people would give wrong answers to questions that they know the correct answer to, in order to fit in with the group. While that study is considered to be of great importance for social psychology, many psychologists (including Asch himself) argue that it in itself does not give enough information to make a conclusion for a wider population. The main criticism is that the original experiment includes only male American students, therefore the effect could be demographic rather than a general human trait.

Further research demonstrates how different factors can affect conformity. Age was not taken into consideration in the original study by Asch, but it turns out that younger people are more likely to conform 4. Gender can also be a factor 5 — women are generally more influenced by the majority compared to men, although the difference is not huge. Milgram showed 6 that if the task is more important, people tend to be more independent because they feel responsible for the outcome. In the same study, he showed a difference in the conformity from participants with different cultural backgrounds and he proposed that people from individualist countries are more independent, compared to ones from collectivist countries. That statement was confirmed by a more recent meta-analysis 7 of over 130 studies in the field. That analysis showed that levels of conformity have decreased over the years, although no explanation of this trend was provided

People are more likely to conform when people are not confident in the accuracy of the information they have to provide, a phenomenon called informational conformity. This is not surprising — we often need external verification of our thoughts and memories, and when the result is not what we expect, we tend to think that it is us who are mistaken rather than everyone else. After all, that’s far more likely. Right? Well, sometimes. Other times, we wrongly conform to the majority and this can have many negative consequences, especially when in a stressful situation such as giving testimony.

It is natural for witnesses of a crime to have a misunderstanding of what really happened during the event. In fact, they often have false memories of the details, the people involved and even the chronological order of the events, as showed by Elizabeth Loftus in her excellent TED talk 8. Because of this, eyewitness testimony has been criticised heavily as to whether it is a reliable form of evidence. It is important to remember that memories are not stable, and they can easily be changed on an unconscious level.

Informational conformity can play a huge role in eyewitness testimony. One study 9 used a very naturalistic approach: instead of recreating the events in the laboratory (when it can be doubtful that it is a true representation of reality), they used participants that had been witnesses of real crimes. Each participant was shown a video of the same crime, but with slightly different details. Then, they were encouraged to discuss the content with the other participants before performing a memory test of the videotaped crime. As one may expect, many of the participants made mistakes. But the number of mistakes was far higher than it should be. With nearly three quarters of the participants stating at least one item that was not presented in their unique video, the results were comparable to the original experiment of conformity by Asch. However, this study has much higher significance for us as a society, because it provides practical information about how listening to other people’s accounts of a crime can change one’s own perception of it. Another shocking result is that many of the participants were ready to accuse a person who was not even present in their videotapes, but was believed by another “co-witness” to be guilty. How many? Most of them; around 60 percent of the participants were ready to blindly follow the accusations of their peers. Another experiment 10 conducted in a similar way, showed that men are actually more likely to conform in such circumstances, which is a surprising fact, given that previous studies in the field show the opposite trend. As we know, when a person is more confident in their thoughts and memories, they are less likely to conform, so the scientists suspect that this effect is due to the fact that women can remember more information in a video compared to men 11, and, thus, are more certain of what actually happened.

As a result, researchers in the field suggest 12 that it is important to ask the witnesses whether or not they have discussed the events with another witness, because that would be something which should be taken into consideration. Another advice given is is to interview the witnesses as soon as possible with minimal delay, as this decreases the chance they to discuss the events with other people and, thus, be influenced by them. Informing the jury (if present) of the possibly influenced testimonies of the witnesses can be helpful as well 13.

Conformity plays a huge role in our society. We have to admit, it has many positive effects — it sets social standards, makes us feel accepted and trust each other more. However, we have to be aware where to draw the line and learn to trust in ourselves, as blindly following the majority can cause us to make mistakes and, in more extreme cases, lose our individuality. No matter if we are talking about a scientific experiment, or a real court trial, standing against the crowd can have a huge impact on the overall result, and not necessarily a bad one. And who knows, maybe that stupid joke you heard a while back wasn’t actually that funny.

This article was specialist edited by Ida Emilie Steinmark and copy edited by Kirsty McLean.

Arti is a Computer Science student at the University of Strathclyde. He loves programming, human brains and everything open - open source, open science, open education and open minds.