Can we use online games as educational tools?

On the 3rd of August this year KeyArena Center in Seattle was flooded with people eagerly awaiting to see their favourite teams play. But they were not there to watch the stars of NBA or the next edition of the Super Bowl, instead the reason for their excitement was The International 2015, an electronic sports Dota 2 championship tournament. The competition was impressive, not only because of the vast number of visitors but also because of the impressive prize pool of over $18 million. Esports are organised multiplayer video game competitions between professional players. They include game genres such as real-time strategy, fighting, first-person shooter, and multiplayer online battle arena. In 2013, figures showed that approximately 71 million people worldwide watched competitive gaming 1. Since online games have attracted the attention of so many people, can we use them not only as entertainment but as educational tools as well?

What are MMOGs and who plays them?
Massively multiplayer online games, or MMOGs, are games in which players can interact with one another to explore environments and fight ferocious computer-generated enemies or even other players. At the same time they have to develop the strengths and abilities of their in-game character. Some people have in their heads the image of a young, socially awkward male when they hear the term ‘online video games’, but studies show that this is largely a misconception. The latest report from the Entertainment Software Association reveals that the average age of videogame players is 35 and 44% of them are women 2. 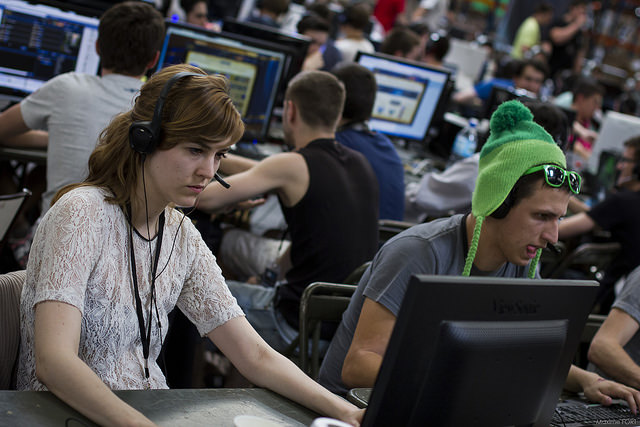 Not all gamers fit the stereotype of a young male. Image credit: Maxime FORT via Flickr CC BY-ND 2.0 license

One of the most important components of these games is the social aspect. If players want to participate in communities, and complete the most difficult challenges that these games offer, they need to show positive social skills such as being friendly and helping one another. Just like in the real world, anti-social behaviour towards others can have detrimental consequences for the player. Those who do not put effort into developing their social competence will not be welcomed into groups and will be reported to others as a bad example, resulting in virtual ostracisation. It is not uncommon for players who want to join particular teams to fill in application forms and be interviewed by group leaders, much like for a real-life job. The structure of the teams is the same as that of real-world organisations where a chosen leader distributes tasks to individual members and the team works together to achieve an assigned goal 3.

MMOGs as learning environments
Based on such games, scientists and educators have developed massively multi-student online learning environments, pedagogically designed spaces where students can learn online by completing tasks and interacting with others. Since the current teaching environment, in which students learn in a classroom with a teacher, is mostly content-oriented and centered around the educator, too much importance is given to memorising facts out of context and preparing for exams. Thus when students are faced with a problem presented in a slightly different way, they find it problematic to come up with a solution. This is why they should be encouraged to develop better thinking and problem-solving skills, which can only happen through active participation 4. This is where we can utilize online games. When interacting with virtual environments students leave behind their passive role in the education process and can have fun while asking questions, socialising, and solving problems. They can take risks and explore at their own pace without any major consequences 5.

Educational games encourage developing strategies, testing hypotheses, and higher order thinking rather than simple comprehension. They have rules, goals, outcomes, feedback, and require socializing 6. Online games make the students decision-makers and allow them to learn through trial and error, receiving immediate feedback for their actions. In games like World of Warcraft (WoW), a popular MMOG, you need to develop genuine expertise since players are part of a team in which every player has a different and essential role. In order to win a battle, you need to understand other players’ in-game abilities as well as your own. Online games are fun and engaging, and the skills involved can be applied to a wide variety of topics including geography, engineering, and military training 7.

Games also lead to unintentional learning. For instance, in WoW, players can take up a profession like blacksmithing, which involves becoming familiar with the necessary tools and metals. While interviewing two gamers in their research, Jane Barnett et al. found that they have developed a basic understanding of metallurgy from their time spent online. On a science test at school the gamers had no trouble coming up with the two substances that make bronze, something which no one else in their class knew 8 .

The case studies
In 2007, Foreman and Borkman used The Sims Online to conduct learning exercises in their sociology class. Through structured interactions in a set of simulated scenarios, their students could develop an understanding of sociological principles. The students showed high levels of analytical and interpretative abilities, and had little difficulty recognising sociological concepts when they appeared in the game 9.

In a similar study, Dede et al. designed a game called River City, which teaches scientific enquiry skills to middle school students. The goal of the game is to find out why the residents of the city are getting ill. To do that the students worked in teams, exploring and analysing water-related health problems. The game provided them with the opportunity to become scientists and to use their knowledge in an applied context. Moreover, they enjoyed the mystery factor and the absence rates went down 10. The colourful design of the game served as an effective tool in capturing the children’s interest. Photos of the game’s interface can be found on Harvard’s original website about the project 11.

These promising studies show that massively multiplayer online games can be utilised as effective educational tools, if developed and applied properly, due to their wide-ranging student appeal. Despite the fact that they are entertaining, these games can not replace all aspects of the current education model. Instead they can be used as the basis of innovative homework assignments. Games like River City can improve the computer skills of students in a time when technology is widely used in many professions. It is not surprising that even large companies like IBM are starting to recognise the usefulness of gaming experience: ‘It’s not a stretch to think resumes that include detailed gaming experience will be landing on the desks of Fortune 500 executives in the very near future. Those hiring managers would do well to look closely at that experience, and not disregard it as mere hobby. After all, that gamer may just be your next CEO’ 12.