Me, Myself and Microbes

What lives inside our bodies, weighs in at up to twice the weight of the human brain, boasts 10 cells for every single human cell, and has a DNA sequence 150 times larger than the human genome? A diverse array of microorganisms, collectively known as the gut flora or microbiota1. The human gut contains a staggering 1 x 1012 (that’s one million million!) bacteria per gram of colonic content. This mutually beneficial co-habitation begins from birth and continues throughout life, but can be altered by various changes in environment or diet and significantly through the use of antibiotic treatments. A surge of research in recent years has uncovered the complexities of the relationship humans have with their resident gut bacteria, which some researchers in the field have termed a “forgotten organ” of the human body. Amid the growing understanding of the microbiota comes the astounding revelation that these microbes are not simply back seat passengers, taking advantage of the nutrient-rich gut environment, but may be essential to maintain digestive health and even influence the behaviour of their human host.

The key means of investigating the microbial population involves germ free (GF) mice raised in a sterile environment, preventing bacterial colonisation. GF mice show abnormal activation of a key pathway relating to stress, the hypothalamic-pituitary-adrenal (HPA) axis2 which can be reversed by reintroducing bacteria to the gut. Abnormalities in the gut flora have been strongly linked to chronic inflammatory conditions of the gut and bowel such as irritable bowel syndrome (IBS), ulcerative colitis and Crohn’s disease3. IBS is the most common and well researched bowel condition, and has a neurological dimension, with up to 80% of patients presenting with behavioural symptoms, commonly manifesting as anxiety or depressive disorders4. Furthermore, recent research has suggested that food cravings may be manipulated by gut bacteria. In one study5, participants with identical diets were found to have different microbial waste products in their urine which matched whether or not they craved chocolate. As the microbiome itself is shaped by what we eat, this suggests two-way communication.

How do the bacteria living in our gut affect the inner workings of our brain? The answer: Through the bidirectional communication pathway known as the brain-gut axis. Microbes can synthesise an extraordinary variety of complex molecules, including some neurotransmitters also produced by our brain cells. Microbes can therefore exert neuronal actions within the “brain of the gut”, otherwise known as the enteric nervous system. Neuronal changes in the gut are transmitted to the central nervous system, further affecting the inhibition or release of neurotransmitters and potentially altering the way the brain functions.

Another way the microbiota can affect the brain is through activation of the gut endocrine cells which release hormones into the bloodstream. As mentioned previously, the lack of microbiota in GF mice models has been shown to exaggerate the HPA axis stress response, which involves release of hormones from the pituitary gland in the brain stimulating the release of the stress hormone cortisol from the adrenal gland. The ability of the microbiota to influence this important pathway illustrates the involvement of neuroendocrine pathways which act between the gut and the brain. Furthermore, gut microbial composition has been shown to affect systemic levels of inflammation-promoting chemicals6, which have been implicated in a range of psychiatric disorders including depression through their action on the brain.

So how do we look after this largely neglected “organ” that outnumbers us, resides within us and may be influencing everything from our choice of snack to our day-to-day mood? Should we all be buying overpriced bio-yogurts to expand our population of good bacteria? In short, maybe. Neuroscientists have been sceptical of the claims of the probiotic market in the past, and quite rightly so due to a lack of clear evidence7. In recent years, however, the growing interest in brain-gut interaction, and the proven advantageous effects probiotics have on gut inflammation, have prompted many studies investigating the effects of supplemental microbes on behaviour. In rat models of depression, probiotics reduced depressive symptoms and one strain of bacteria in particular, bifidobacterium, was more effective at treating depression and anxiety symptoms than antidepressant medication8. In a human MRI study, healthy female participants taking probiotic supplements saw decreased emotional responses in brain regions often associated with anxiety when viewing negative images. This finding questions the use of probiotics in the treatment of anxiety disorders and mental health conditions9.

So, with our gut bacteria proving integral to our digestive health and mental wellbeing, what does this mean for antibiotics? Evidence suggests that the overuse of antibiotics in medical treatment may be more harmful than previously thought. A rise in gut inflammatory conditions has been linked to alterations in the gut flora due to antibiotics. These changes can be substantial, with alterations in both composition and activity, such as the production of essential proteins and molecules. Some changes in the gut microbiome may even be irreversible following antibiotic treatment according to some researchers10.
If antibiotics are throwing our microbial populations into disarray, what potential effect is this having on the brain-gut axis? We know that disruptions in our gut flora is linked to neurological conditions but what if this disruption is already present in an individual? Autism symptoms improved in some cases with antibiotic treatment11, which may be correcting an overgrowth of certain forms of gut bacteria associated with the condition. 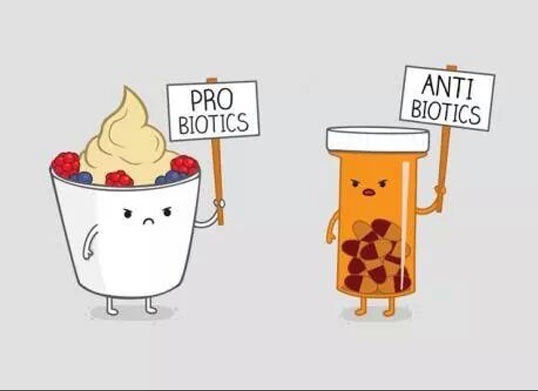 The tricky relationship we have with our gut flora may be described most simply as a balancing act. A lacking bacterial population may be just as detrimental as atypical overgrowth. How to strike that balance is something the scientific community has yet to ascertain. We know probiotics can supplement levels of some bacterial strains, and we know antibiotics deplete and alter other bacterial strains, but what we don’t know is how these strains interact with one another and the definitive effects of individual strains. Knowing more may pave the way for individualised treatment to ensure our microscopic communities thrive. Taking extra care of our gut flora is unlikely to be an all-encompassing treatment for all digestive and neurological ailments, but we are beginning to realise our microbes may be just as important as our traditional organs and every bit as interconnected. The gut flora literally outweighs the human brain, but uncovering how much weight they really carry depends on the continued push for more large scale human microbiome studies.