With the increasing demand for cancer treatments, the rapid growth of antibiotic resistance and the mounting pressure for the medical and pharmaceutical industries to find new wonder drugs, it is of no surprise that scientists have begun to experiment with “outside the box” treatments. One of the most interesting of these unconventional treatments is the development of “DNA Robots” as a novel drug delivery system. However, if this proves to be a viable treatment then it could be a game changer for modern pharmaceutics as we know it.

Sci-fi versus reality
The image evoked by the term DNA robots or nanorobots, as they have been affectionately dubbed by their inventors, is enough to alarm those with little knowledge of the science behind this fascinating technology. For some, the idea of small robots swimming through the bloodstream is alarming – we are after all a generation morbidly interested in genetic modification and robotic intervention in surgery (Terminator anyone?). However, while these nanorobots have some robotic function1 like their mechanical cousins (thus the name) they are created entirely from DNA and are used for very specific functions. To create a nanorobot the desired DNA sequence is synthesised and then folded into the required orientation in a process known as DNA origami.

Back to Basics
DNA origami was invented in 2006 by Paul Rothemund, who used the technique to create a smiley face out of a strand of viral DNA. The technique works by matching up the base pairs in the long DNA strand to the complementary base pairs on smaller DNA strands. The larger DNA strand can be molded into shape and then “stapled” in place by the smaller DNA segments, thus allowing for the creation of two and three dimensional nanoscale shapes2. This technology has several useful features that have been exploited by scientists, such as its ability to create precisely folded, and thus specifically sized, DNA shapes. Frederick Simmel has explored these properties in order to create a DNA origami ruler, which can be used to adequately measure the space between molecules and as such this can be used as a nanoscopic ruler for super-resolution microscopy3.

It’s a strange new world
And yet, for me, the most exciting piece of technology produced by DNA origami is the nanorobot. Douglas, Bachelet and Church have experimented with DNA origami to create a barrel-shaped container out of DNA which is about thirty-five nanometres in diameter. This container is the DNA nanorobot, named thus because of its robotic functioning and due to its ability to be programmed to treat a variety of different diseases.

The nanorobots consist of two halves that are linked together by flexible DNA joints and the inside of the robot contains twelve sites that can be used to attach drug “payload” molecules such as antibodies or anti-cancer drugs. The nanorobot is held together by clasps called aptamers which are short nucleotide strands that are attached to the outside of the nanorobot. These aptamers are specially sequenced in order to recognise cell markers on target cells, allowing specific types of cells such as lung cancer cells to be targeted. When the aptamers come into contact with surface of the target cells, they open and the drug within the nanorobot is delivered into the immediate vicinity of the cell. 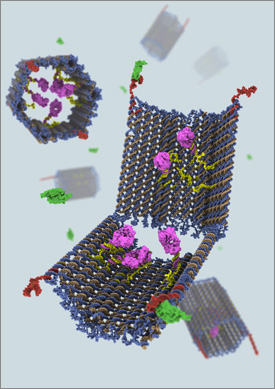 Dr Bachelet insisted that these nanorobots are capable of detecting a small population of target cells within a large population of healthy cells. These healthy cells do not have the correct set of cell markers to open the nanorobots and, therefore, are unaffected by them. Douglas, Bachelet and Church have tested multiple types of aptamer “clasps” which were all designed to detect and target different types of cancerous cells within a cell culture. The study showed that the nanorobots designed to target leukaemia cells could distinguish them from other cancer cells and release the medication – an antibody – in order to prevent proliferation of the leukaemia cells. These nanorobots are capable of detecting (and targeting) twelve tumour types already and, with research continuing, there is no telling what the limit on this technique might be.

Perhaps the most obvious setback of this technique is that the nanorobots can only interact with the receptors on the cell surface and therefore if the drug target is within the cell then detection and treatment may be impossible. Another major consideration is the lifespan of these DNA nanorobots, as once in the body they may be destroyed by nucleases or pass through the body quickly. However, the knowledge in the pharmaceutical industry about the efficacy of drugs and how to lengthen the time a drug can stay in the body by adding excipients or film coatings, should allow for rapid improvement of these nanorobotic issues.

A new hope
The creation of drug delivery nanorobots poses a significant advancement in the treatment of cancer patients. When undergoing chemotherapy or radiotherapy in order to treat cancerous cells, it is not unusual for patients to experience the unpleasant side effects of nausea, hair loss and a constant feeling of tiredness. This is because the treatment, though readily effective against cancer cells, can often have a poisonous effect on the body’s healthy cells. In the case of chemotherapy, the aggressive drugs used to destroy the cancerous cells cannot differentiate between the rapid growth of cancer cells and that of blood or skin cells. As such, the drugs attack all of these cells, leaving the patient feeling weakened. The development of nanorobots as cancer treatments could prevent these unfortunate side-effects as only the cancerous cells would be targeted. This would also allow drugs considered too toxic for today’s therapies to be used to blitz cancerous tumours.

The potential applications for this technology don’t just include reactive medicines but also preventive therapies. Dr Bachelet has previously mentioned4 that he hopes this technology will be used on healthy people in the future. He foresees the ability to inject these nanorobots into a healthy individual during a general check-up and having them screen the body for any traces of any cancer. This preventive use of nanorobots could help to detect, treat and eradicate the cancerous cells long before conventional detection methods would have diagnosed cancer.

As this technology advances it is easy to see how people could be fooled into believing that the nanorobot is more science fiction than science fact. Even more incredulous is the knowledge that the first human trial will soon be underway to test this new therapeutic treatment in a critically ill leukaemia patient. However, if this nanorobotic technology truly works, as the researchers suspect it will, in the human body then this could completely change the way we look at targeted medicines. One thing’s for sure, with large pharmaceutical companies getting involved in the development of this technology5, it might not be long until we witness the revolution of medicine as we know it.

This article was specialist edited by Euan Wilson and copy edited by Andrew Denman and Rebecca Laidlaw.