Silence of the Spiders: An outsider’s guide to spider sex

Image in the public domain.

Size really does matter. Especially if you happen to be a male orb-weaving spider in a food-poor environment. I’m going to tell you a tale, a bit like silence of the spiders, about how and why cannibalism of mates evolved. It is a tale of sexual conflict and dimorphism (females are much bigger than males), and an evolutionary arms race consisting of bondage, genital mutilation, guarding, hypnotism and cannibalism. Sounds like my last Tinder date.

Let’s begin with sexual dimorphism: from our ape-centered viewpoint, we think “man strong, woman soft”. Biologically speaking (and ignoring the minefield of sexist implications), the effects of testosterone and oestrogen result in men being bigger and stronger (on average) than women. Being creatures of nature and evolution, we happen to follow other mammals with this pattern but not so most arachnids. 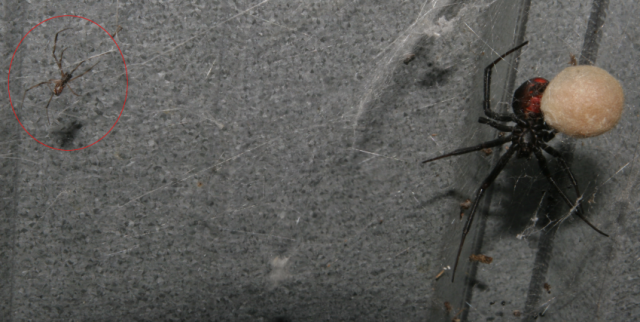 One explanation for the evolution of this size difference is “bridging” – spiders cast strands of silk into the breeze and then use it to move on to greener pastures, maybe to find some food or a mate. Bridging is much easier for smaller spiders – a PhD student at the Spanish National Research Council tested this bridging theory with male and female spiders from 13 different species using a fan to simulate a windy day. I imagine the result resembled a Spider-man tornado (coming to Netflix this fall). As female orb-weaving spiders build webs (instead of wandering from plant to plant as though trying to find themselves on a gap-yah), evolution favours larger bodies as they can build bigger webs, catch more prey and lay more eggs. The study also found that sexual dimorphism correlated with web building – female spiders of species that didn’t build webs and needed to bridge plants were much the same size as males. Larger females will find it easier to fulfil their other “job” of raising young and feeding the hungry males, who will hang around a female’s web so as to mooch off her food for free. Starting to feel a little less sorry for the men now?

So, what are the options for male spiders who want to avoid being eaten alive? Many species of spider have evolved complex mating rituals, some deemed too adult for 50 Shades of Grey. Xysticus cristatus spiders involve a little light bondage.  The male “gently” (How was this scientifically measured? What were the controls? This research raises more questions than answers..) ties the female onto her web with silk, mates with her, and then runs off. From an evolutionary standpoint there is a fickle balance here: if he ties her down too tightly she’ll die and no babies, but if he doesn’t tie her down she’ll eat him and no further mating. Evolution favours the male who can tie a female down and escape to tie up another.

Next up: genital mutilation. Males will break off their palps (a pair of appendages that can transfer sperm as well as taste, smell and in some species are rubbed together to make sound), “plugging” the females to prevent other males from fertilising her. Partial emasculation is common, but full emasculation as with coin spiders, Herennia multipuncta, seems unnecessarily.. wasteful? Scientists at the National University of Singapore say that removing all of the junk allows the male to continue inseminating the female long after mating (like an octopus tentacle wriggling around a dish in a Korean seafood market, but with sperm) as well as making the males lighter and more agile. Think: the Unsullied or Varys from Game of Thrones. Totally makes more sense that he’s called The Spider. In the case of Tidarren sisyphoides, each palp makes up 10% of a male’s body weight; shedding one makes him 44% faster with 63% more endurance. I can only imagine the endurance test involved a really tiny treadmill.  Some species guard the females from competing males, as there are no weight classes in spider dating – it’s all fair to snip off a little so you’re fast enough to ward off other men.  Extreme manscaping!

The last way of avoiding being eaten is hypnosis, which seems more like a way of the male spider announcing that he isn’t prey. He shouts “don’t eat me!” using distinctive vibrational patterns on a female’s web. Researchers found that females reacted to real prey more slowly when these mating “shudders” were played than white noise or no playback vibrations. I’m super curious as to what the male mating vibrations would sound like if played back in a human audible range. I suspect a Maroon 5 performance of Itsy Bitsy Spider or perhaps Tarantula by Pendulum. Sometimes though, the soothing sounds of spider web string music just aren’t enough and, after mating, the female decides to eat her baby daddy. #sadface.

Is it surprising that post-coital cannibalism occurs in a couple of dozen species, after the male mooches off the insects the female has caught? Even in species where it does occur it is the exception, not the rule, and most of the time the males escape alive without the black widow equivalent of a cigarette après l’amour. This is not a case of evolution favouring revenge: if you have large, web-building females and small, mobile males then it’s possible that the female might mistake her mate for prey. Genes favouring male sacrifice could evolve if they improved the chances of survival of the female and offspring. As the palps are damaged or removed in some spiders the male can’t go on to mate again; why not turn this evolutionary cul-de-sac into a nutritious meal?
Some researchers believe this behaviour is due to aggression: spiders have become such good predators that they sometimes can’t help being a little overzealous when hungry.  This would explain cases of sibling cannibalism and females that kill and then carry dead males around in their mouths. The complex adaptations and mating rituals of bondage, hypnosis and cannibalism are part of an evolutionary arms race that arose due to sexual dimorphism.  In all of these examples, the plucky male manages to mate thanks to his adaptations and so pass on his genes to another generation. Sometimes to the sound of music. Evolution is a cruel mistress, and doesn’t mind if the male ends up mutilated or eaten, so the moral of this story is: if you like someone, try serenading them and not stealing their food. Evolution high five!

Jonathan Orgill is a Biomedical Engineering PhD researcher, with an amateur interest in things creepy and crawly.