Reclaiming the Human Future: Energy, Engineering and Ideas of Progress

250 years on from James Watt’s ground-breaking invention of the separate steam condenser Professor Colin McInnes presented a fascinating lecture looking at energy production from the past to the future.

Around 250 years ago, James Watt, while walking on Glasgow Green, conceived of the separate steam condenser; an invention that made the steam engine industrially viable and, in doing so, revolutionised the way humanity produces useful energy. It moved us away from wood, wind and water power towards less land and labour intensive production, or, in the words of Professor Colin McInnes, whose “Reclaiming the Human Future: Energy, Engineering and Ideas of Progress” lecture was on Thursday, it “freed us from the land”.

Professor McInnes, who holds the James Watt chair at the University of Glasgow, gave a lecture that was sombre in its analysis of our current energy problems but also optimistic in its presentation of some of the fascinating potential solutions. 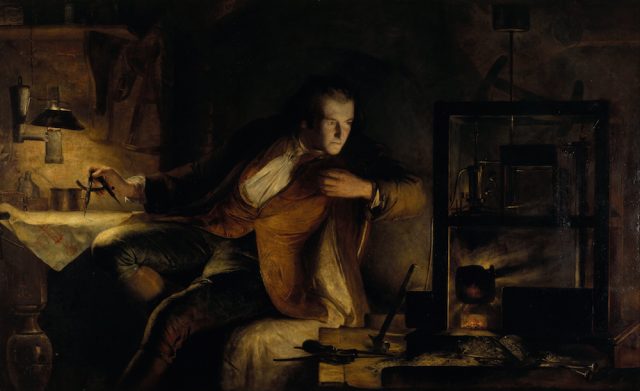 The modern quality of life we enjoy is heavily reliant on electricity and yet a large portion of the world is in a state of energy austerity. To address the need for increased worldwide energy production, Professor McInnes believes we should consider the energy density of the fuels we use. Energy density is the amount of energy contained in the fuel per unit mass and for hydro-carbons the higher it is the lower the amount of carbon dioxide produced when the fuel is burnt. The move from wood burning to coal burning that James Watt enabled was a move to a fuel of higher energy density. With further technological progress this advancement has continued, from coal to oil to gas and nuclear. In Professor McInnes’s opinion, to entirely ignore these engineering achievements in favour of renewables would a step backwards in reducing our impact on the land and thus environment. For example the Gemasolar solar power plant in Seville would need around 30 times the land area of the Torness nuclear power plant to produce the same amount of energy annually. Also consider that a new generation of fast spectrum nuclear power plants could power the U.K. for 500 years using only our current nuclear waste as fuel. Professor McInnes was not arguing against renewable energy, but for an energy abundant and environmentally conscious future made possible by both renewables and increasingly energy dense fuels.

Climate change is one of the most important issues faced by the world today. Though most of us are aware of the normal measures being taken, from being conscientious about our power use to building wind farms, Professor McInnes presented some of the revolutionary measures being considered, such as using man-made thermal mountains to rejuvenate deserts or creating a space sunshade out of an asteroid.

A thermal mountain, a tall area of warm air produced by a low albedo, or dark, surface, could be made by laying large black strips where a desert meets the sea. These thermal mountains would draw moist air from over the sea into the desert, leading to precipitation and thus increased plant life.  Not only would this new greenery draw in carbon dioxide, it would also, through photosynthesis, absorb the heat that the desert sand would have radiated into the atmosphere at night.

Alternatively the amount of the sun’s heat the planet receives could be tweaked by building a huge reflective membrane in space. The size necessary for this sunshade precludes the possibility of building it on Earth. It would require capturing a metal-rich asteroid, baking out the metal using a solar reflector and assembling an ultra-thin solar mirror to be positioned at the Lagrange gravitational midpoint between the Earth and the Sun.

Both of these ideas, though far from being realised and requiring careful study to manage the environmental consequences, are indicative of something that Professor McInnes wanted to highlight: humanity’s optimistic ingenuity. It is our continuation down the path of engineering progress that James Watt started 250 years ago that will provide solutions to our energy problems and possibilities for our future.

Andrew Denman is a physics undergraduate at the University of Glasgow. He likes strong coffee with a touch of milk and a good book.