We’re sitting at the bar in The Research Club on Ashton Lane near the University of Glasgow and, despite the drink in my hand, I’m about to do some research of my own, interviewing the mastermind behind the night’s activities. Some, like me, may remember when this bar used to be called Nude and served alarmingly cheap cocktails during student nights, back in the day when drinks promos were easier (and more legal) to come by. It re-opened in September as The Research Club and it has had something of a make-over.

It’s nice. There’s a large, round-cornered triangular bar in the centre of the room, which is well-lit, clean and no longer suffers from sambuca-sticky floors. I can no longer order an Absolut and lemonade for £1 (oh, for the bad old days) but they do have a nice variety of beers on tap, some tasty wines and, thankfully, an offer of a whisky and Death Star for £3. Brace yourselves whisky aficionados, for I’m sure you will have An Opinion about this – the whisky and Death Star turns out to be Jura with a large, Death Star-shaped ice cube in it. I’m sure this would upset purists, but as I am not much of a whisky drinker I find it much easier to drink when chilled, so I sip mine cheerfully enough.

Why a Death Star? Well, tonight is the launch event of a new series of exciting evenings that will all fall under the heading Late Night Science. People who spend their evenings doing sciencey stuff are often a little nerdy and nerdy people often like Star Wars, so there you go. We aren’t to drink on an empty stomach, though, and are provided with a small but delicious selection of free bar snacks; think chicken wings, enormous scotch pies and wasabi peas. They’re all lovely, although there isn’t much for vegetarians, and they make me wish that payday had been today rather than tomorrow so that I could order something more substantial from the main menu.

The organiser of the event tonight is one Dr Matthew Edgar. Matt is a research associate in the school of physics and astronomy at Glasgow University. He works in the optics group and ,like many here tonight, is keen on public engagement and science outreach. Before things really get started, I catch up with him to ask him a few questions about how it’s going to work.

TheGIST: Hi Matt, so is this event your master plan?

Dr Matthew Edgar, PhD: Um, I suppose so. It is if it works.

TheGIST: And how is it going to work?

Matt: Well, Late Night Science will run every week, here in The Research Club. Today we’re having a talk and a mini quiz, next time we’ll have a full science pub quiz and after that we’ll alternate.

Hakuna Matt-ata: Tonight we’ll have The Science of Interstellar. In two weeks we have a talk on Alan Turing and the birth of artificial intelligence.

TheGIST: There’s an Alan Turing* film out now as well – will it always be movie themed?

Mighty Matt: Not always, but it is a nice way to pick a topical theme that a wide audience can relate to. Roughly once a month I plan to invite an expert speaker who works in the field of science, engineering or technology described in current and classic sci-fi films.

TheGIST: So, what kind of audience are you hoping to reach?

Mattius Prime: Well it’s a pub event, so upwards of 18 years, but anyone really. I would like to think that the event will become popular among students and researchers, but I also want it to appeal to anyone with an interest in science.

TheGIST: And will it always be free?

Tom-a-toe, To-Matt-oe: Yes. Unless of course the venue is regularly exceeding its capacity, at which point I may need to resort to online booking system, but it will always be free.

TheGIST: Thanks, we look forward to tonight and to your future events. 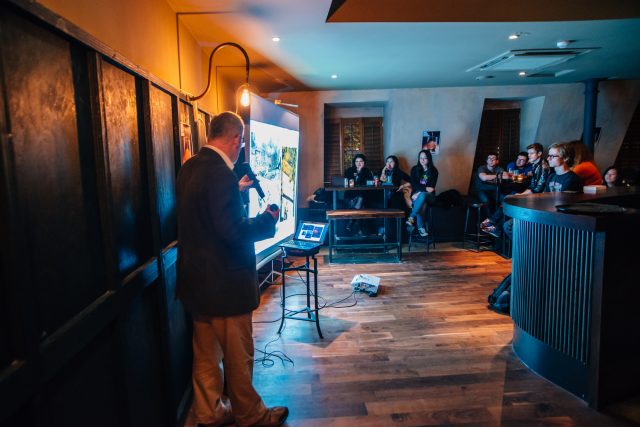 Tonight, to hammer home the sci-fi theme, we are treated to a talk by Professor Martin Hendry, the head of the School of Physics and Astronomy at Glasgow University. He talks about the Science of Interstellar – a newly released movie directed by Christopher Nolan. Without giving too much away, the movie features black holes, worm holes, neutron stars and a fair smattering of general relativity.

Martin is something of a pro at this kind of talk. He’s a professor of gravitational astrophysics and cosmology but has also always been very enthusiastic about science outreach and public engagement. His talks often have sci-fi themes (The Physics of Star Wars is very popular with new undergrads joining the physics and astronomy societies at Glasgow), as well as harder science (I’ve seen him give talks about dark matter, cosmic inflation and general relativity) and sometimes slightly sensitive topics (you haven’t lived until you’ve seen a professor of physics get into a shouting match with someone who doesn’t believe the Moon landings really happened). So I had high hopes when I heard he was speaking and Professor Hendry doesn’t disappoint. To avoid spoilers I won’t summarise the talk here, but I should be surprised if he doesn’t repeat it at a later date. Let’s just say that most of the science in the movie is pretty good, so long as the phenomena are understood at all, with only a few exceptions**.

As a method of science communication this works quite well – it’s light hearted and the pub environment makes it feel casual and intimate with people cheerfully laughing along and becoming engaged with the Q&A session that follows. I’m not sure that many of the attendees are from outside of the School of Physics and Astronomy but this is only the first event and I’ve no doubt that non-scientists will start to attend as people share information about the event through social media and word of mouth. I’m pleased that it’s a every other week and I like the idea that, even if I can’t drop by every time, if I am free I’ll always know that there’s something entertaining happening in The Research Club. 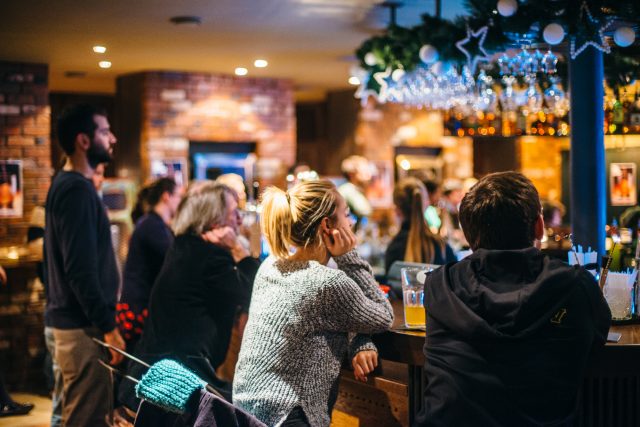 Following the talk and the Q&A is a very brief but devilishly tricky science quiz. It’s 20 quick-fire science themed questions to give us a taster of what to expect next week. I’m unsure about most of the answers – and later Matt admits he might have to dial down the difficulty for the full science quiz next week – but in the end I don’t do as badly as I’d thought. At around 10 pm we wrap up, although of course we’re welcome to stay and continue our nerd session. I slink away, happy with my score in the quiz and with my new-found knowledge about wormholes. I’m looking forward to next Thursday.

* The Imitation Game (2014).
** For persistent readers, the greatest and most glaring error concerns rocket thrusters on another planet. I regret that there are no prizes for pointing out the mistake.

Late Night Science is held on Alternate Thursdays from 7pm at The Research Club on Ashton Lane.