Body Donation: Blurring the Lines Between Science and Art

As a neuroscience student, working with donated bodies has been a hugely beneficial part of my education because, when it comes to anatomy, diagrams just don’t cut it. The history of Scotland’s world-leading anatomists has been well documented, as have the dubious sources of their cadavers 1. In the 19th century, it was commonplace for anatomy schools to employ body-snatchers, and in Edinburgh, Burke and Hare famously murdered their tenants to sell to the medical school for £7 each (worth it). Cadaveric dissection is still in practice today but now the process is tightly regulated following the introduction of the Anatomy Act 1984 and the Human Tissue (Scotland) Act 2006. Donating your body to science is a concept most people are familiar with – the choice now appears alongside the organ donation options when applying for your driving licence. But who has heard of donating your body to the arts?

Enter artists Christine Borland and Brody Condon. Their collaboration on the Circles of Focus project exhibited at Glasgow’s Centre for Contemporary Arts explores human body donation as a source of artistic research and practice. The boundaries between science and art are being increasingly tested and I wanted to see for myself the artists’ interpretation of body donation, a far cry from the clinical setting I was used to.

Upon entering the CCA gallery, you are faced with a document which includes the thought-provoking statement: “This exhibition is a proposal for two body donors”.  This is a compilation of legal paperwork which functions as a proposal to potential body donors the artists have worked with, and also includes statements of intent from the two individuals. The donors referred to in the paperwork expressed their interest in working with Borland and Condon after attending a public talk about their artistic research and have since added a declaration to their wills:

‘I declare that after my death I wish to donate my body for anatomical examination, medical education or research, within the guidelines of the Anatomy Act 1984 (as amended 2006) to the Scottish Medical Schools. I specifically consent that my body be made available to Circles of Focus (Christine Borland & Brody Condon) for artistic research as detailed in the proposal presented at Centre for Contemporary Arts, Glasgow 4 April – 17 May 2015.’

The paperwork also includes photocopies of letters to and from the donors, a will which has been updated to include the declaration above and extracts from the Anatomy Act and Human Tissue Act. It also includes a consent form for anatomical bequest which is apparently used by all Scottish universities should you wish to donate your body to one institution in particular. 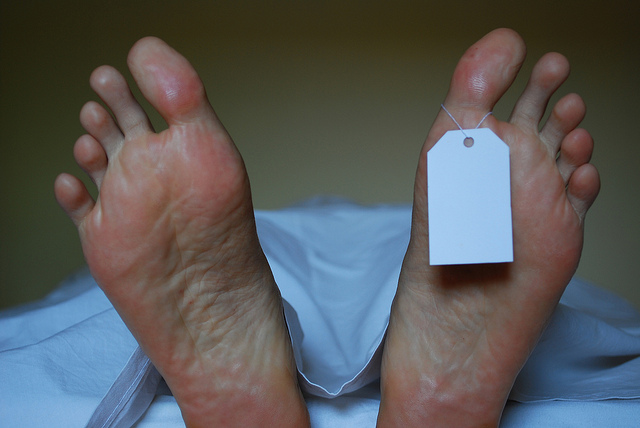 Borland and Condon were inspired by forensic science and hypostasis – the process by which blood pools post-mortem and causes discolouration or ‘lividity’. The artists were particularly intrigued by pale, geometric shapes which can arise on dead bodies where objects have been pressed against the skin, preventing movement of blood and therefore any discolouration. During the exhibition, they held informal ‘rehearsals’ in which contact between sculptures and the skin of surrogate living bodies was documented. This transfer of material to skin was filmed by the artists and will make an aesthetic proposal for the physical remains of potential body donors.

A lot of thought has gone into forming the sculptures that will be pressed into the skin. Working with a local archaeologist in Orkney and a jar coffin expert in Korea, the artists have developed sculptural works from clay bringing together material used in both funerary and everyday practice. The clay was made with earth from the Orkney Islands using a labour-intensive method that incorporates fat, sand and animal hair which can be traced back to Neolithic times. These clay ‘polygons’ on display formed the ‘Hypostasis Circle’ and were created at an event leading up to the exhibition, fired in an open-air kiln. Current digital construction methods were also explored, with structurally optimised 3D prints creating a second circle, the ‘Hypostasis Prototype’.

Blurring the lines between science and art, Borland and Condon have carefully examined the process of body donation and they are the first to introduce the possibility of facilitating the donation of your body not to science, but to art. This contemporary approach to death, suggesting that cadavers could be a source of ‘ambiguity and expression’, is novel but has the potential to become more widespread. With people searching for increasingly innovative ways to honour the memory of their loved ones, perhaps sculpture and hypostasis will provide a sense of life after death for both potential donors and their families in the future.
The exhibition Circles of Focus will be presented at the CCA until 17th May 2015 and will be continued at Stroom Den Haag, The Netherlands in 2016.

Katrina is the Strathclyde Editor-in-chief of theGIST. She is a PhD student in Optical Medical Imaging with Healthcare Innovation and Entrepreneurship.