Cancer and Heart Disease: are viruses the cure?

Cancer and cardiovascular disease: the deadly duo. Charged with being the most likely causes of death for under 75’s in Scotland, they were responsible for taking 200 lives for every 100,000 people in 2012, according to the General Register Office (Scotland). As such, effective treatments for cancer and cardiovascular disease have become the ultimate targets of many research labs across Europe. You may be surprised to hear that a promising area of research in the treatment for both illnesses involves the humble adenovirus.

An adenovirus is a type of virus responsible for viral infections such as conjunctivitis and tonsillitis. However, this nasty infectious agent has an intriguing trick up its sleeve; it is able to easily get into the cells in our body and change the proteins that they produce. Believe it or not, this elegant process can be turned into a useful tool for cancer and cardiovascular disease researchers. To understand how this process can be hijacked for use in clinical treatment, first you will need to get better acquainted with your new friend, the adenovirus.

Say Hello to My Little Friend
An adenovirus is comprised of a just simple protein coat with associated molecules, otherwise known as a capsid, surrounding a piece of DNA. Despite having such a simple structure, an adenovirus manages to evade the defences of the cells in our body. In a crucial step, (hint: remember this part) using a region of the capsid known as the “knob domain”, the virus can bind to a host cell. This results in the virus being enveloped into the cell. Once inside the unlucky cell, an adenovirus hijacks the cell’s bio-machinery so that the cell stops making useful products for itself, and starts replicating copies of the virus. When the replication process is finished, the multiple copies of the adenovirus will burst out, effectively killing the infected cell. These new adenovirus copies go on to infect other cells, eventually causing the symptoms of a nasty viral infection. 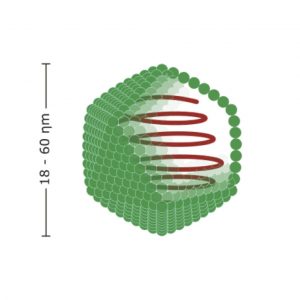 While this might sound terrifying, researchers see this process as a golden opportunity. If a virus can get into a cell, and hijack it so that it makes whatever proteins it wants, could it make the cell produce a protein that is useful to the cell? Yes and this is why for cell biologists, adenoviruses are the bread and butter of gene therapy – introducing new genes to cells which allow them to make a new protein. When an adenovirus is used in this way it is known as a vector.

However, while gene therapy has been around for many years, it is still cautiously used in a clinical setting. Despite high safety ratings in clinical trials, gene therapy continues to be besmirched with a few highly documented examples where the treatment has turned deadly. Undoubtedly, the most famous example would be the case of Jessie Gelsinger, an American teenager with an inherited deficiency of an important liver protein. In 1999 he received gene therapy using an adenovirus – he died only 4 days later. It was later concluded that this was a tragic result of serious scientific misconduct and malpractice by the researchers involved. To the American press, however, this wasn’t simply a case of rogue researchers breaking the rules; they branded the whole process of gene therapy as dangerous, causing years of research setbacks.

Despite the publicity nightmare adenovirus gene therapy received, it has been slowly re-gaining its composure. The actions of a few researchers may have made gene therapy a temporary pariah, but it’s potential to help treat genetic conditions has never been forgotten. Teams of researchers have been gradually gaining a greater understanding of how the components of the adenovirus attach to the cell membrane, in order to make the process even safer and more effective; and the “ADVance project” aims to do just that.

The ADVance project is funded by the European Commission and studies how adenoviruses operate in order to create treatments for a variety of conditions including cancer and cardiovascular disease. The project is a massive collaboration between 8 European Universities and a number or Industry partners. The team at The University of Glasgow, led by Professor Andrew Barker, are currently working on improving the process of targeting the adenovirus. This involves making the adenovirus only infect the cancerous/diseased cells in the body, and to leave other healthy cells unaffected.

As perhaps you may remember from before, the ‘knob protein’ of the adenovirus binds to the receptor on a cell membrane’s surface to allow it into the cell. However, this process a little more complex than it first appears. Crucially, the knob protein and receptor must be complementary to each other or, put simply, they must “match”. Only the correct knob protein will interact with the correct receptor. So by artificially changing the knob protein on the adenovirus, researchers at the the University of Glasgow can make it recognise the receptor of only a cancerous or diseased cell. This process is incredibly tricky, as any change to the virus’s structure may result in it not assembling together properly. However, the researchers at the University of Glasgow have managed to change the knob protein structure so that the virus can still assemble itself. This was achieved by incorporating a specially designed protein into the knob region.

Professor Andrew Barker and his team’s research isn’t just limited to improving cancer treatment. Treating cardiovascular illness, particularly problems with heart by-pass surgery, is the top priority for the group. Professor Andrew Barker stated that a major concern of the group is that, “operations that use saphenous vein for the material for by-pass often fail (up to 50% at 10 years)”. This is when the vein becomes damaged in the new, high pressure environment of the human blood vessel system. When discussing the impact his research will have, Andrew Barker said that, “ We have worked out a gene therapy strategy to block this pathology…We are currently working towards a first in man trial at the Golden Jubilee National Hospital. If successful, this would have a substantial impact on patient care”.

Due to the funding by the EU commission, the ADVance project will continue to piece together all of the intricate interactions involved when way adenoviruses interact with our cells. The more the scientific community understand about this process, the huge task of engineering adenoviruses in innovative ways to treat illness will become easier. This massive collaboration is also ensuring that the next generation of European scientists will have the experience to carry out adenovirus research to an excellent standard. Professor Andrew Barker, reflected on the failings in the 1990’s, “These trials were largely unsuccessful and a number of safety issues emerged. This suggested that: gene therapy was not ideal for all of these diseases … and that trial design needed to be improved. Over the last 5 years this has led to the emergence of many positive clinical studies, improved (adenovirus) vectors for clinical gene therapy and a re-ignited impetus in the gene therapy field”.

Often in biology, inspiration for treating illness can be found in the elegant solutions that nature has already come up with, and that evolution has perfected over time. The adenovirus’ then, is a perfect example of just how ingenious nature is. In time, the survival skills of cancer and cardiovascular disease will gradually be put to test by the creativity of research teams and the excellent tool that is the humble adenovirus.

This article was written for the Explorathon 2014 magazine: www.explorathon.co.uk