Mitochondrial disease is devastating: Lily, a baby affected by the illness, suffered from severe symptoms since her birth, including seizures, heart failures and weakness. With no treatment options or hopes for a cure, she died before her first birthday 1.

Lily’s story is only one of thousands of babies in the UK born with defective mitochondria, and until recently there was little that could be done to treat resulting illnesses. Now, a technique pioneered in the UK could become the key to preventing many mitochondrial diseases: Mitochondrial Donation, developed by researchers from Newcastle University, may spare around 150 babies each year a fate similar to Lily’s 2.

Mitochondrial donation is not a simple treatment: it involves exchanging faulty mitochondria in an oocyte (an egg cell) for healthy ones from a donor. This, combined with in vitro fertilisation (IVF), can generate a baby that is cleared from defective mitochondria and therefore free from mitochondrial disease. Due to the use of donor mitochondria, this technique was nicknamed “3-parent IVF”. 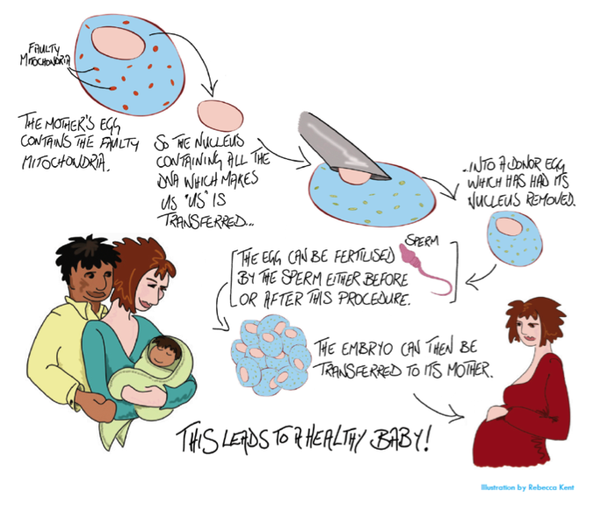 Mitochondrial donation involves a permanent change in mitochondrial DNA, and the swapped mitochondria can be passed on to following generations. This method is unlike any other available treatment- therefore new legislation is needed to permit it. A change of UK law is already under way: on February the 3rd this year the House of Commons held a vote on legalising the limited use of mitochondrial donation techniques. The outcome was spectacular: 382 MPs voted for the change, with only 128 against it. The House of Lords held a vote on the 24th of February, with a clear majority – 280 to 48 votes – for the amendment 6. The change in law will allow affected families to apply for a mitochondrial donation license from the Human Fertilisation and Embryology Authority (HFEA) before the end of the year – making the UK the first country in the world where this treatment is available.

The parliamentary discussions and votes on mitochondrial donation are a great success for evidence-led policy making: data was generated through a decade of research to develop and test the techniques, and 3 independent scientific reviews by the HFEA assessed the available data 7. The Wellcome Trust has led the way in informing MPs about the scientific background of the technique 8, and a key researcher of mitochondrial donation, Professor Doug Turnbull of Newcastle University, became an advocate and communicator of the new methods. Patient groups and charities like the Lily Foundation have helped raise awareness about mitochondrial diseases and the merits of mitochondrial donation. Additionally, public discussions and consultations were held to inform people and to survey their support for the treatments. 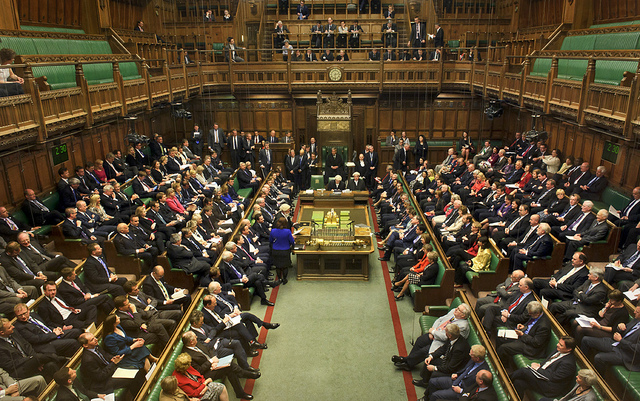 Caption: The House of Commons vote on Mitochondrial Donation was held on the 3rd of February; Picture
Image Credit: Catherine Bebbington/Parliamentary Copyright

Some critics, including Church of England groups, voiced concerns on whether the use of these techniques is ethical 9. Pronuclear Transfer seems particularly problematic for these opponents, as a fertilised egg is taken apart and merged with another egg 10. Maternal Spindle Transfer avoids “destroying an unborn life” and is therefore less controversial for some religious critics.

Both methods are, however, covered by the new proposed law, as there was not enough data to prefer either as more safe or efficient 11. A review by the Nuffield Bioethics council considered possible concerns. It concluded that, in the light of the potential benefits of the technique, mitochondrial donation should not be considered unethical 12.

Several groups questioned if enough research had been done to show that the techniques are safe. Studies of mitochondrial donation in mice showed no lifetime effects on the treated offspring 13. Macaque monkeys with donated mitochondria, generated in 2009, are healthy 14. Still, they are only 5 years old – not old enough to exclude long-term negative effects of the method, critics say. Even if there were no side effects in animal models, this would not guarantee identical results in humans – ultimately, tests in humans are needed to truly address these concerns.

A similar technique called “cytoplasmic transfer” was shortly practiced in the United States in the late 90s, until it was forbidden due to “ethical and safety concerns” in 2002 15. The method consists of injecting cytoplasm (the cellular liquid with floating particles, including mitochondria) into the oocyte of a mother as part of a fertility treatment. Approximately 30 children with cytoplasmic transfer were conceived before the ban 16, with no known severe side effects as a direct consequence of the treatment.

Mitochondrial donation is now broadly supported in the UK, both among the public and scientists. A group of researchers, including 5 Nobel laureates, called for the change of law before the House of Commons vote 17. Internationally, scientists commented mainly positive on a change in legislation, with few voices calling for caution and more research. With the recent discussions and Parliament votes, the UK is well on track to be an example for evidence-led politics worldwide.

Michaela Mrschtik is a Cancer Research PhD student at the CRUK Beatson Institute. She tweets @MiMrMa