The River Kelvin passing by a University of Glasgow building. Image credit: dun_deagh via Flickr (License)

Residents of Glasgow will undoubtedly be familiar with the fair West End of the city, home to Kelvingrove Art Gallery and Museum and the surrounding park, through which the River Kelvin flows, as well as Kelvin Hall, Kelvinbridge and the Kelvin walkway. Those in Glasgow interested in science will also undoubtedly be familiar with Lord Kelvin, a mathematician and physicist, whose name is famously associated with the units of absolute temperature, Kelvin (with 0K equal to -273°C).

Kelvin carried out much of his work at the University of Glasgow. One of his famous experiments, known as Kelvin’s Water Dropper or Kelvin’s Thunderstorm, is depicted below. The experimental set-up involves two connected water sources which pass through metal conducting rings and drop into the buckets placed below. The buckets and the rings are electrically connected. When a charge is spontaneously generated in one of the water streams, the opposite charge is induced in the metal ring as the water passes through it. This then influences the charge taken on by the second stream of water. A voltage is then generated from the two buckets, both of which now contain bodies of water holding opposite charges. When the voltage is large enough, sparks are produced. Unfortunately, the water dropper is unable to produce a sufficiently high voltage to be a useful energy generator, and is most commonly used to demonstrate the principles of electrostatics. 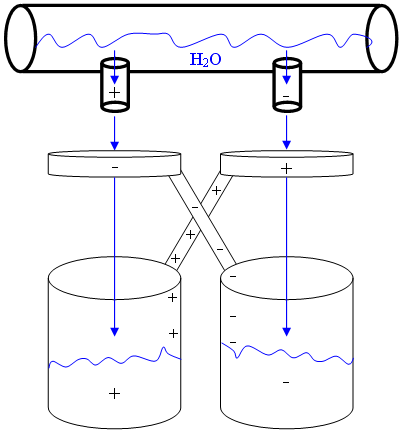 In 2013, Álvaro Marín et al published a twist on Kelvin’s classic experiment in the journal Lab on a Chip 1. It was thought that the efficiency of the water dropper experiment could be improved by miniaturising it in such a way that it could be carried out in a microfluidic device. A prototype device containing two microfluidic drop generators was constructed from polydimethylsiloxane (PDMS) and encased in glass slides. Induction electrodes were used in lieu of the metal conducting rings used by Kelvin. Droplets travelled past the induction electrodes, where a charge could be induced in the droplets, and traversed through the channels of the device to two larger electrodes, which represent the collection buckets of the original water dropper.

Marín stated that further improvements could be made to the prototype, and could be expanded by combining it with more devices to increase energy efficiency – easily achievable considering the ‘severe miniaturisation’ of microfluidic devices.

Miniaturisation of the Kelvin Water Dropper Experiment by Debbie Nicol was edited by Rebecca Baird and Kirsty McLean.