Witnessing Vikings: What Science Can Tell Us

Recently, a three-year-old study resurfaced on the internet which made the feminists all squeal out in joy. The study had found, through osteological examination of skeletons, that Viking graves containing swords and shields, previously assumed by archaeologists to belong to men, in fact belonged to women. Naturally, this caused all sorts of speculation about the fabulously gender equal existence of Vikings (and the awesomeness of female Viking warriors) – yet, whilst we salute a victory of science over assumption, we mustn’t forget the critical thinking so fundamental to scientific rigour. If we approach the mysterious Vikings from a place of scientific inquiry, we must critically evaluate the evidence and base our understanding on this. What indeed can science tell us, and what must be left to speculation? 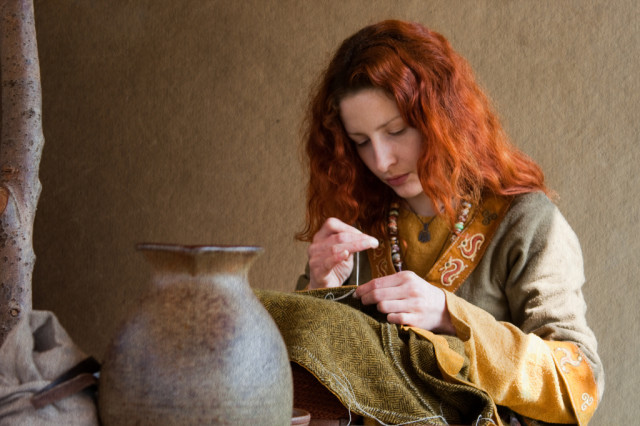 Not a woman to be found
Shane McLeod, the author of the original study, published in the journal Early Medieval Europe in 2011 1, wanted to clearly answer a relatively simple question: what was the sex ratio of the Vikings who settled in England? The simplicity soon becomes hard to find, however, when the crookedness of the evidence becomes apparent.

This evidence seemed to suggest that very few Viking women settled in England alongside the Viking men: women and minors were very rarely mentioned in the historical written records, there was a much lower number of female-named Viking landowners and a much lower number of Norse female names have been preserved compared to Norse male names. Similarly, very few oval brooches were found in burial grounds, again hinting at a low levels of female settlement.

Yet, in recent years archaeologists have begun to adopt a series of more hard science methods to investigate the ratio of women to men within Viking settlers. However, the deeper the scientists dug for answers, the more complicated the reality seemed to become. The new techniques elucidated the remains of the Vikings, but in the process also brought a range of new troubles into light.

Traditional interpretations: flaws and all

Before looking at the new issues uncovered, let us have a look at why traditional methods were coming up short.

Misguiding circumstances often surround the artefacts which are buried with the corpses. Take the oval brooches: they have been found throughout Scandinavia, but have very rarely been found in England, which, as mentioned, has been taken to suggest very few Norse women. However, other Scandinavian dress items, like Norse-style jewellery, were found in abundance, and hence posed a mystery. Similarly, the question of whether the items came to England with Norse women wearing them or whether they were sent as gifts remains largely unanswered.

One of the most talked-about misconceptions, both online and in McLeod’s paper, is the categorising of a grave as “decidedly masculine” as a result of finding military or horse riding-related items in it (sometimes also an actual horse). In broad terms, this means deciding on the sex of the buried based on whether the person was buried with sword and shield. Naturally, this poses the great risk of subjectively interpreting the sex of the individual on a culturally-biased basis: do we know, for certain, that women cannot under any circumstances be buried with a sword, a spear or a horse? No – but if we continuously use this method of sexing graves, no disparity between what we think and what is correct would ever be detected.

This particular idea has survived for a long time, in spite of what a fresh pair of eyes might call obvious contradictory evidence. For example, a grave containing both a sword and oval brooches was consistently and widely believed by scholars to be a double burial of a man and a woman, despite only one skeleton being found. Naturally, this is easy to pinpoint in hindsight, but it does give an impression of just how generally accepted the sex paradigm was.

So – leaving behind the flawed unscientific approach of old, we turn to science to give us a helping hand in the quest for knowledge.

Science at your service – you’re welcome!

Three main scientific approaches have been employed to sort out the confusion of the Viking burials. These approaches are not problem-free, but offer far more accuracy, and each targets a fundamental question that needs to be answered if any proper interpretation is to take place: sex, age and origin.

First, the sexing of graves (I assure you that that is the proper term) through osteological examination. An osteologist is a person who studies bones and teeth and whatever comes with that, including disease, development and function. As a result, osteologists can usually quite accurately determine the sex of a skeleton based on the bones. Although a decision can often be reached, the approach isn’t perfect. Tell-tale bones of female skeletons, such as the pubic bone, can be missing, leaving osteologists with the less obvious skull to deal with. In particular, postmenopausal skulls are hard to judge and are sometimes mislabelled as male. Nonetheless, the method is overall a lot more accurate than the biased evaluation of grave goods.

Second, carbon dating for determining age. A golden oldie (sorry), carbon dating is a technique by which the age of a plant or an animal is determined by looking at the amount of carbon-14 present within it. Carbon-14 is continually exchanged with the environment until the time of death, after which it declines in rate of its half life as it undergoes radioactive decay. This means that from the amount of carbon-14 present in the dead sample, and knowing the half life of carbon-14, you can calculate how long ago carbon exchange stopped – and hence the time of death.

Third, isotope analysis for origin. Different isotope ratios of, for example, strontium (similar in chemical behaviour and function to calcium) in teeth and bone can be compared between people. Strontium isotope analysis gives a fingerprint for a region, as the strontium composition of rock types in an environment is very particular, and these are well-mapped throughout much of the world. Strontium enters the human body through the diet (plants, drinking water) and will thus reflect the isotope ratio of the one’s environment. As bone undergoes a complete replacement cycle every 10 years, isotopes found in bones reflect the environment of the last 10 years of the individual. Teeth, on the other hand, do not recrystallise after formation and therefore reflect isotope ratio of one’s childhood when they were first formed.
The strontium isotope ratio in one’s teeth, then, corresponds to that of one’s childhood region. This can give scientists a reasonably accurate point of origin, especially if taken together with other evidence, such as oxygen isotope analysis. 2

Although scientific techniques might appear overwhelmingly cool, they also have an annoying habit of exposing even more complications. A good example of just how complex and mysterious a burial site can become under the scientific microscope is the mass grave at Repton, Derbyshire, which contained the skeletons of 264 individuals. The grave site appeared to contain the mass burial of Vikings fallen at the Great Army Winter Camp around the year 874.

A series of confounding variables was soon discovered. The female skeletons detected by osteological examination, which had previously counted towards the Viking women count, looked remarkably like Anglo-Saxon skeletons, rather than Scandinavian. Worried that the remains were not Vikings but in fact deceased nuns from the near-by Repton nunnery, the scientists carbon dated the lot.

Sure enough, when the results came in, they showed an age range from the seventh to the ninth century. It seemed the Viking burial ground had been incorporated into, or built on top of, an earlier mass grave, which had thrown off the initial results entirely. As such, the burial ground became so muddled up that the exact dating, origin-determination and sexing of the individual skeletons is still considered a somewhat open question.

So where does it leave us? How many women were there? The suspense is killing me!

Well, Shane McLeod found that in the sample of 13 burial grounds that convincingly were labelled as ‘Norse’, seven were male, six were female and one was a sex-wise unidentifiable infant/juvenile, which controversially points to an almost 50/50 ratio of men and women. McLeod himself points out that despite the small sample size, these data are more reliable because of their use of scientific approaches. Yet, it would be unwise (and unscientific) to assume that this means that 50% of Viking settlers were women without any further research. It is an important lesson in accepting how science sometimes brings us forward with lightening speed and other times in tiny mouse-sized steps.

Nevertheless, the study does open up for a serious re-think about how we approach the past. If further research were to corroborate McLeod’s results, what does this tell us? It tells us that more female Vikings settled in England than previously thought, and that women were sometimes buried with weapons. What it doesn’t tell us, is why. Whilst it is possible that women were equal warriors to the men in Viking society, the fact that they’re buried with swords doesn’t prove this. Lots of other scenarios exist and could be equally likely. Speculation about the Viking way of life shouldn’t necessarily be discouraged, but if we set out to know only the truth, we must, above all, follow the evidence, wherever it takes us.