Avert Your Eyes, Not Your Heart

If the shimmering black guitar in the corner of the stage wasn’t a sign that this was no ordinary scientific debate, the talking blobfish made it abundantly clear. Being a mere mortal, the sight of a four-feet-tall blobfish with its sad clown-like face (if the clown had melted), dribbling what can only be described as ‘deep-sea mouth goo’ and bellowing at you with a distinctly Northern Irish twang would provide enough sustenance for your nightmares to haunt you until your dying day. For the Ugly Animal Preservation Society (UAPS), on the other hand, it is the symbol of hope; the symbol of a long-begotten dream of biologist, science communicator and our compère for the evening Simon Watt.

To our detriment, it seems that we are far too ‘mammal-centric’ as far as our interest in the Animal Kingdom is concerned. The overwhelming majority of the intricate and fascinating species around us live in our soil, our ponds and swamps and deep within our oceans; they are insects, amphibians and sea-life and, most importantly, they’re downright fugly. It’s because of this lack of aesthetic appeal that we tend to ignore their plight when faced with endangerment and extinction; they’re simply not cute enough for us to care. This attitude must change and this concept is the core of the UAPS mission; it behoves us to take care of all living creatures, ugly and adorable alike, as, more often than we care to admit, it is us who are the root cause of animal extinction. With the deep-sea deliquescent clown as their mascot, Simon and the UAPS seek to scour the land in search of a new mascot for each and every city they visit and they do so by combining comedy, science and good ol’ fashion’ democracy to great effect.

As part of this summer’s Glasgow Science Festival, the UAPS took to The Stand comedy club in our fair city’s West End and pitted six comedian/scientist hybrid creatures in a head-to-head battle royale, each championing their own candidate for Glasgow’s official Ugly Mascot. What followed was a battle of sex, slime, frogs and feathers culminating in surprising result. So, are you sitting comfortably? Then let’s meet the contenders…

Straight in with a classic, Iain Stirling kicked off the night on a rather sombre note by comparing his own misfortune in the love department with the ever-ugly and bizarrely benosed Proboscis monkey (and realising that the monkey still gets more action). “What’s in a nose?” you might say. Well, bogies, for one, but this poor primate’s large and foreboding schnoz is the least of its worries; the only primate on the evening’s bill, this Borneo native is also the proud owner (well, the owner, anyway) of some tremendously hideous genitalia, combining a race-car-red penis with a scrotum as black as pitch. Add this to the fact that it has webbed feet (making it an unusually adept swimmer for a primate) and prefers to eat unripe fruit (making them bloated and, well, farty) and you might start thinking you’ve sussed why its numbers have fallen by over 50% in the last forty years. Sadly, however, unattractiveness is not the cause (sorry, Iain, even these creatures have little trouble finding a mate).  The on-going deforestation of Borneo has left many a Proboscis without its natural habitat and they have now become an endangered species. 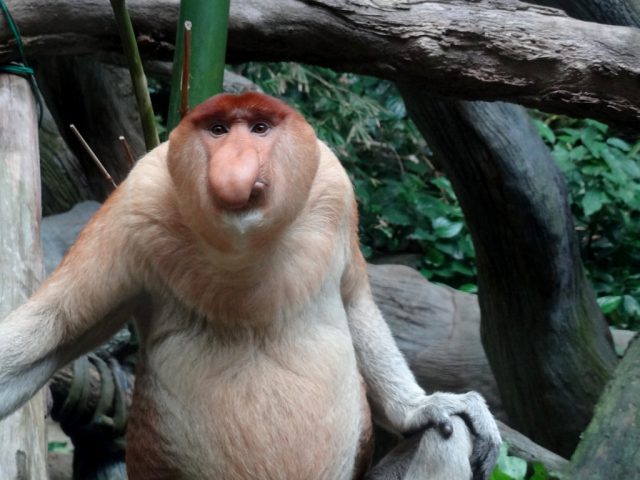 Next up: a termite-eating pervert with a story to tell about Earth’s evolutionary history. No, not Kate Cross, psychology lecturer at the University of St. Andrews; I speak, of course, of her chosen Ugly: the Purple Pig-Nosed Frog. Kate’s campaign for this fat, purple, warty amphibian was rooted in her research into the psychological differences between men and women. You’d think that the male’s proclivity for finding a female three times its size, grabbing a hold of her spine and scraping out her eggs with his feet before he fertilises them would be enough to put the ladies off for good and endanger the species. Unfortunately, these purple pig-nosed dames are just as kinky and it is instead our proclivity for coffee, cardamom and ginger plantations in India that have led to the endangerment of these weirdos. Their discovery provided strong evidence that the Seychelles and Madagascar separated from India sometime after the break-up of supercontinent Gondwana began; with such an important story to tell, these freaks are too high a price to pay for a caramel frappuccino.

One of two bird species in the fight for Glasgow’s Ugly Mascot, Africa’s own Southern Ground Hornbill was next. Ally Houston, in his own special way (and I mean special), gave this enormous bird a voice for the evening. In its home of Southern Africa, the arrival of this hulking, black, red and wrinkly-faced bird signalled the beginning of the rainy season and this may be why hunting it became such a strong taboo. With modernisation, however, the people of Southern Africa have more sophisticated means of determining the weather forecast and killing them to make way for farmland has become so widespread that they are now a Critically Endangered species.

Now, when you hear, “Hemsworth” what do you think of? Most likely, you’ll be picturing Phwoar – sorry, Thor himself. Even more likely, he’ll be taps aff and wielding Mjölnir, biceps rippling like the thunderclouds themselves. There’s also a chance you’re a tween dystopian fiction fan and will be picturing Gale Hawthorne whilst pretending you’re Katniss Everdeen, huddled together in the forest for warmth. Either way, your first thought probably wasn’t Shadow Campbell from Bikie Wars: Brothers in Arms and that’s because he is played by the older and less aesthetically-pleasing Hemsworth brother. So, what about when you hear, “salamander”? Now, you’re picturing some cute little lizard-type dude with wee froggy eyes and pretty colours, yes? Well, Jamie Gallagher brought with him a checklist for all that is Ugly and an animal that ticks every box. Slimy? Yep. Beady eyes? You bet. Wrinkly? And then some. Creepy little human hands? Dear, GOD, get it, get it with fire! A Critically Endangered creature, the surprisingly huggable Chinese Giant Salamander is under serious threat of being eaten into extinction. Despite the strongly-enforced protection laws, many of these gentle giants are illegally sold for food and traditional medicine. The Luke Hemsworth of the salamander world is the world’s largest amphibian, reaching around 1.8 m in length and, if that doesn’t stop you from sleeping ever again, how about the fact that it is locally known as “the baby fish” due to its wailing-child-like distress call? Thought so. 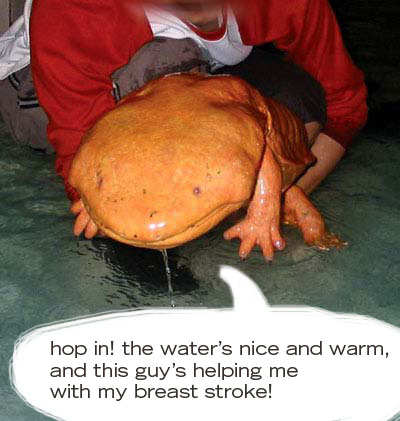 Our penultimate freaky creature was the Waldrapp Ibis (or northern bald ibis) and Eleanor Morton was there to give us the inside scoop on why these bizarrely-built birds were on the decline and why they need to be saved – she even wrote a rap song about it. They’re incredibly famous and, in fact, you’ve more than likely seen one at some point in time. You’d think you’d remember having your eyes accosted by an almost metre-tall black bird with a bald, red face that resembled a microwaved raven but you’ll probably only have seen some very small drawings of them as they were used in Egyptian hieroglyphs. In fact, the Ibis has been revered as a holy symbol and celebrated in many cultures through the ages. Sadly, having long died out in Europe, the last century has seen a 98% drop in their population due to loss of habitat to farming, pesticide poisoning and hunting and, as Mr. Burns-y as they may look, they need our help to prevent them from being wiped out completely.

Finally, trust Raymond Mearns to use his comedic talents to champion an animal that’s nowhere near in need of conservation. In fact, there’s more that the Naked Mole Rat could do for us than we could for it. This bald, wrinkled, subterranean ghoul was the first of only two mammalian species found to live eusocially – that is, like an ant colony or bee hive. With only one breeding female (again, three times bigger than the males) and only three breeding males per colony, it’s hard to believe that these animals thrive just fine despite such strict mating habits. Impervious to pain and almost entirely immune to cancers, these Bond villains have no need for our help and no place as Glasgow’s mascot. But they sho’ are ugly. 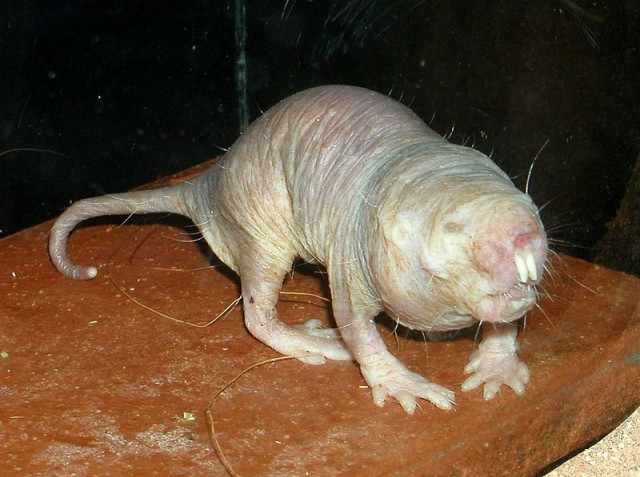 And, with that, it was done. The presenters were silenced, the animals put away (thankfully) and the fate of Glasgow’s official UAPS Mascot was placed firmly in the audience’s hands. By way of loudest cheer, it was up to us to decide which of these five endangered freaks would be the official ugly face of Glasgow and – in what must be a first for the UAPS – we couldn’t decide! Glasgow has chosen that it cannot be represented by just one ugly animal, it needs many. So please, join me in welcoming our new coalition of amphibious overlords and let’s put looks aside and fly the flag for animal preservation! You can visitwww.uglyanimalsoc.com for more details about the society and their work and become more involved in the preservation of these fantastic creatures. With the Amphibian Coalition of the Purple Pig-Nosed Frog and the Chinese Giant Salamander at our backs, the world is ours for the taking, Glasgow! Warts and all!

Avert Your Eyes, Not Your Heart by Barry Robertson was copy edited by Charlie Stamenova 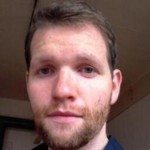