The Planet in Our Hands with Sir Mark Walport

The Glasgow Science Centre (GSC) is an enchanting venue, especially when wine and canapés are being served. Although they were a great starting point, the food and drink were not the main event at the GSC on the evening of the 14th March; Professor Sir Mark Walport was. Walport is the UK’s chief scientific advisor and was speaking in Glasgow to discuss the global threat of climate change.

Before becoming a governmental advisor, Sir Mark Walport was a doctor specialising in immunology and rheumatology. He was then Head of Medicine at Imperial College London before becoming Director of the Wellcome Trust for 10 years. Sir Walport’s agenda for the evening was climate change: presenting the evidence and discussing governmental policy.

Immediately, Sir Walport addressed the obvious question of why he, a former doctor, was playing the role of a climate scientist attempting to convey some important information about anthropogenic climate change. His answer was simple: studying medicine teaches one how to both communicate scientific knowledge and appreciate the importance of doing so. This served to emphasise his identification of communicating climate science as one of the main challenges in solving climate change, the other two being the science itself and the subsequent formation of policy.

To set the broader context, he described how the world has become more and more reliant on electricity in recent years and that this has resulted in a direct increase in overall quality of life. This, of course, is a good thing, but as a by-product, our society has become less resilient to change. We are so dependent on electricity that if the power were to go off tomorrow, we would soon have empty supermarkets and widespread panic. This discussion did not aim to scaremonger but to emphasise how important it is for us to secure a reliable and sustainable power supply for years to come.

Sir Walport then presented a comprehensive survey of the evidence that anthropogenic climate change exists. He drew on the reports by the Intergovernmental Panel on Climate Change (IPCC), the world’s largest investigation into climate change. The IPCC survey scientific research on climate change from around the world, using thousands of academic papers to produce clear cut information on climate change. In short, humans are having a direct impact on their climate via the emission of greenhouse gasses. Nobody is certain when we will reach tipping point, but due to the difficulty of removing greenhouse gasses from the atmosphere once they have been produced, we should be acting now. 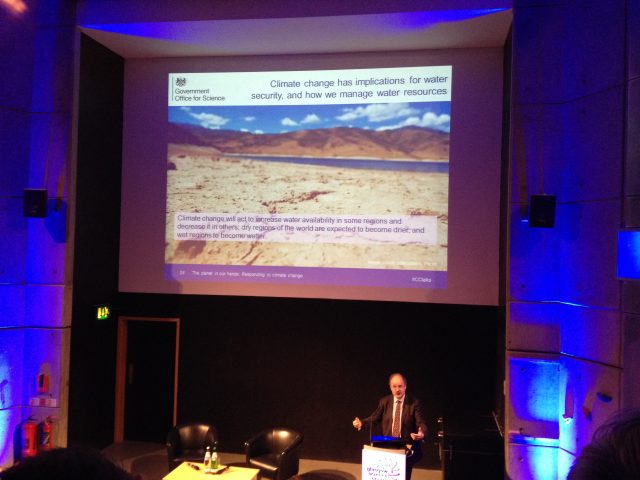 However, just as in medicine, climate scientists have encountered great difficulty in effectively communicating the meaning of these results to the general public and policy makers. Although “97–98% of the climate researchers most actively publishing in the field … support the tenets of ACC [Anthropogenic Climate Change] outlined by the Intergovernmental Panel on Climate Change” 1, naysayers and climate change deniers still seem to abound in the media and general public. Sir Walport offered a few reasons for this disparity. There are numerous misconceptions that arise in arguments about climate change, and the most common is the difference between climate and weather, a mistake of which both deniers and environmentalists are guilty. Using an isolated, severe weather event as evidence for or against climate change is fundamentally wrong because climate defines the average or prevailing weather conditions in an area, and therefore fluctuations in the weather should not be considered.

In addition, Sir Walport stressed the difficulty of communicating both large and small magnitude figures that accompany the study of climate science. For instance, the most recent report by the IPCC concludes that the Earth’s land and oceans have warmed by approximately 0.85°C since 1880. To local Glaswegians, who are accustomed to highly variable weather and temperatures, this may sound like an inconsequential amount, but it can have a large impact on the highly complex system that is the Earth’s climate—cf. chaos theory in many physical applications 2. Sir Walport also identifies the apparent recent “stall” in the warming of average temperatures as another result of people oversimplifying these complex systems. On the other hand, climate science also presents us with figures like gigatonnes (that is 109 tonnes) of CO2 gas being emitted into the atmosphere each year by human activity; quantities like these are hard to picture, especially on the scale of the entire atmosphere.

The good news is that the UK Government have already taken comprehensive measures to try to reduce carbon emissions. The Climate Change Act of 2008 puts in legislation that the UK must cut its carbon emissions by 34% before 2020 and by 80% by 2050. One big questions is: how can we do this? Sir Walport quoted Jon Holdren, President Barack Obama’s senior advisor on science and technology issues, saying that we will need to “mitigate”, “adapt” and “suffer”.

Sir Walport explained that he did not believe in one true climate change solution, a silver bullet if you will, but that we would have to tackle the problem in many different ways. We should use coal but capture the harmful emissions, we should use renewable and nuclear power, we should use less energy and we should invest in technology to help the problem. By using a combination of techniques, we can decrease carbon emissions the quickest. Sir Walport likened the climate change challenge to putting a man on the moon or creating the nuclear bomb. These were incredibly difficult (and expensive) tasks, but with the right amount of will power (and financial backing) they were able to succeed. Hopefully, the same is true for removing the human impact on climate change.

As one gentlemen mentioned in the Q&A section, Sir Walport was “preaching to the converted,” starkly questioning the true value of the presentation although this was not his intention. The gentleman’s proceeding question could have spurred the most important discussion of the night: what advice did Sir Walport have for everyone in the audience going forward as communicators of climate science? The response commenced with an admission that we live in a plural society, and hence, it is not practical to try to convince everyone of the need to combat climate change. Sir Walport continued to say that, as communicators, the most important aspect is ensuring that climate change remains on the public agenda. Key players like the IPCC and governmental science advisors must continue their roles as outspoken advocates and provide accurate, well-presented information to the media and the public. It is no easy task convincing the unconverted of the dangers of climate change; however, if an idea is true then it should eventually reach a critical mass of belief within a population through persistent, continuous communication—a hope that Sir Walport implied in his response.

If you are interested in exploring the issues of climate change and implications of burning fossil fuels, please see the references and take a look at my2050 and GridCarbon (on Google Play and iTunes) which were both pointed out by Sir Walport himself. GridCarbon is a mobile app that provides up-to-date information about the proportion of current electricity being generated by each possible source for the entire UK. my2050 is an interactive web applet that challenges you to reduce the carbon emissions of the UK to 20% of 1990 levels by making decisions on how energy is harnessed and how we can reduce our demand for energy itself.

Matthew Bluteau is a first year PhD Student in Atomic and Plasma Physics at the University of Strathclyde. His research involves conducting fundamental atomic calculations with direct application to fusion and astrophysical plasmas. Timothy Revell is a mathematician studying for a PhD in computer science. Find him on twitter at @timothyrevell or @GlasgowGIST.