ATLAS, an experiment of the Large Hadron Collider Image credit: Will Breaden Madden

The second run of the Large Hadron Collider (LHC) at CERN is due to start at the beginning of 2015, which is imminent from the view of the physicists involved. CERN, the European Organization for Nuclear Research, is applying major technical modifications to increase the LHC collision energy to the full design specification of 13 to 14 TeV – far beyond the collision energies of any previous particle colliders – and approaches this new period of exploration with a refined understanding of the physics and discoveries of its first remarkably successful run.

The more distant future of the LHC physics programme involves many more upgrades and modifications – a key upgrade resulting in the High Luminosity LHC (HL-LHC), which is to have a collision rate about ten greater than that of the LHC. CERN’s efforts, however, are much grander and long-term: what comes after the LHC at CERN?

The Future Circular Colliders (FCC) exploratory study programme was launched this month at the University of Geneva. This five-year international design study is to examine primarily the possibility of a future circular collider capable of collision energies in the region of 100 TeV1. In comparison to the 27 km circumference of the LHC, this next-generation circular collider may have a circumference of up to 100 km. 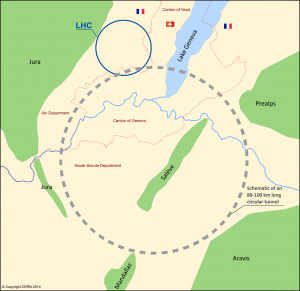 A pre-feasibility study performed by CERN and the specialised firm ARUP concluded that the most feasible project would be an 80 km tunnel under ‘Lakeside’ Geneva (as opposed to a tunnel under the Jura mountains) at a depth of up to four times that of the current LHC tunnel 2. The
FCC study is to be conducted in parallel with the ongoing study on the proposed Compact Linear Collider (CLIC), a lepton collider capable of collision energies of up to 3 TeV – far greater than the collision energies of any previous lepton collider. The proposed CLIC can be seen as competing with the proposed International Linear Collider (ILC), another lepton collider likely to be based in the Kitakami mountains. The FCC study includes considerations on an intermediate 90 to 400 GeV lepton collider and an examination of the possibility of a lepton-hadron collider.

Will Breaden Madden is a Glasgow ATLAS Ph.D. student.