The Artemis Accords: Who writes the laws of the final frontier?

In the 1960’s, at the height of the Cold War, the USA and the USSR were in the midst of a heated technological race for control over mankind’s future in outer space. Fearing the issues that could arise from countries moving into the final frontier, the United States, United Kingdom and Soviet Union collectively drew up a treaty to establish some rules in the previously lawless territory. The “Treaty on Principles Governing the Activities of States in the Exploration and Use of Outer Space, including the Moon and Other Celestial Bodies.”, which, thankfully, is better known as  the more succinct Outer Space Treaty, was presented by the trio in 1967 and quickly backed by the United Nations. The Treaty, which has since been signed by a further 110 parties, instituted a number of basic rules. For instance, Article II established that nothing in space could be claimed by a country; Article IV stated that no weapons of mass destruction could be kept or deployed from orbit; and Article VI made clear that nations would be held responsible for the actions of private corporations in space, among other significant tenets. The problem with the Outer Space Treaty was that it has always been considered only a minimum set of guidelines and since  its inception,  several further problems have arisen around it. Moreover, there have been a number of cases where countries have been able to work around the writings of the Treaty, particularly as technology has developed and the Treaty itself has become more and more dated. Together, these issues have paved the way for a new set of laws, The Artemis Accords.

Following the recent surge in interest in space exploration due to prominent NASA missions and private industry spaceflight, it became clear that the guidelines of space law needed to be updated. In late 2020, NASA and the U.S. State Department revealed the Artemis Accords, building upon the goal of their 2017 launched Artemis Program, which aimed to put the first woman on the moon by 2025. The Artemis Accords are a newly-drafted set of laws and guidelines, firmly rooted in the thoughts and ideas of the Outer Space Treaty, which aim to start a new age of international cooperation in the exploration of our universe. These new accords are primarily focused on making our journey into the great unknown one that is truly for all of humanity, and ensuring that it is not held back by politics or geography. The Accords consist of 12 sections which ensure that this age’s treaty is written with humanity as a collective in mind. This idea is present throughout almost all of the Accords, with Sections I and II noting the benefits of peaceful space travel for all of mankind and stating that it aims to, “establish a common vision via a practical set of principles”. Moreover, Sections IV through VI consider the necessity of cooperation among different agencies which will, “enhance space-based exploration, scientific discovery, and commercial utilization”. Other Sections aim to ensure that our actions in outer space remain both peaceful towards each other and inflict the least possible harm on the stellar bodies we seek to understand.

The first countries and respective agencies signed the Accords in October 2020 and, in addition to the USA themselves, represent their historical allies (Australia, Canada, Italy, Japan, Luxembourg, the United Arab Emirates and the UK). Since then, the draw of the Artemis Accords in furthering technological advancements as well as building and solidifying diplomatic bonds across the international community has been clear. An additional ten parties, in chronological order, have signed the agreement — Ukraine, South Korea, New Zealand, Brazil, Poland, Mexico, Israel, Romania, Bahrain and Singapore. Upon signing in Singapore only last month, NASA Administrator Bill Nelson remarked that, “It’s amazing how much worldwide commitment for this effort has grown over the past year and a half and I can’t wait to see what the coming months bring as additional countries sign on to join our quest for peaceful exploration of space under Artemis.” 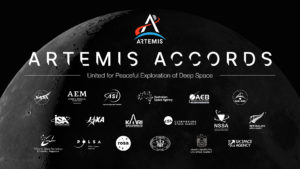 Logos of the 18 agencies that have signed the Artemis Accords. Image by NASA (CC BY 2.0)

Despite the steady increase in international interest, not all of the news around the Artemis Accords has been positive. There are still a number of nations and agencies who have not signed in support of the Accords, and while some may be on their way to doing so, Russia (a prominent spacefaring nation) has been missing from the Artemis Accords and has been vocal about its reasons for this. Dimitry Rogozin, the head of the Russian space agency, Roscosmos, claims that parts of the Artemis Accords are too “US centric” for Russia to consider taking part. The Artemis Accords are almost entirely written and defined by the US, which is a major difference between them and the meticulously negotiated spacefaring treaties of the past. The idea that this newer treaty may simply be a work-around for other previously written agreements is a significant deterrent for a number of potential members such as France and Germany. Particularly, the fact that the original eight founders are a mix of natural allies and smaller agencies could be a troubling sign of the US’s true intentions with the Accords. Russia has long since been a major part of the world’s joint space efforts since the end of the Cold War, with the Russian Soyuz capsule carrying astronauts to the International Space Station since 2011. Their use of Soyuz cost the US around 80 million dollars per launch, and with the collaborative project of the International Space Station planning on coming to an end by 2024, the future of US-Russian joint space efforts are tense. The US’s reservations towards working with China are also straining their relationship with Russia, as the two eastern nations have been increasingly vocal about their interest in furthering space based research programs as a duo. However, the real reason for Russia’s absence from the Accords has been questioned. Current relationships between the US and Russian space agencies are strained to say the least. US trade sanctions on Russia, implemented as a result of the Russian invasion of Ukraine, are sure to “degrade their aerospace industry” according to President Biden, who spoke on the issue in February. There have also been claims of corruption at the top of Roscosmos for years. Regardless of the cause, it is clear to all involved that the absence of Russia, as well as other well established space agencies such as those in China, Germany and France, proves a significant problem to international acceptance of the Accords. In the hope of quelling doubts, NASA wants to ensure that the focus of the Artemis Accords is true cooperation for the benefit of the human race. At a press conference shortly after their reveal, NASA Administrator at the time, Jim Bridenstein, stated, “What the Artemis Accords are really about is coming up with those foundational principles that we all agree on so that when we go explore these worlds together, there’s commonality.” He also added that, “The whole purpose of it is to prevent misperceptions.”

The start of the Artemis missions that the Accords are named for are closer than ever, and with the first planned test flight of the lunar bound rocket scheduled for this August, their writings are ready to be put to use. If all goes well for Artemis, it will be the beginning of a new age of space travel. Regardless of how the Artemis Accords are received internationally, it is clear that they will play a pivotal part in how humanity spends the next decades of space-based exploration.

Andrew is an undergraduate student studying Physics at Strathclyde University. The fields of Astrophysics and Technology have always been his main areas, but he has interests in subjects far outside the scientific field. He hopes to pursue a career involving science communication and all things writing.